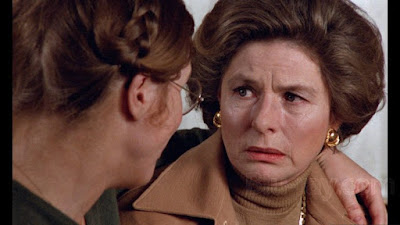 When I first started this blog, I had never seen a film by Ingmar Bergman, which was certainly a massive hole in my viewing history. Now, while I’m not close to being a completist, I’ve at least seen a lot of them so I know what more to expect when it comes to putting a Bergman film in the spinner. Autumn Sonata covers territory that I’ve seen from Ingmar before. We’re dealing with family drama and family trauma here, and the pain that people inflict on each other both intentionally and accidentally.

Primarily, we are going to be dealing with the relationship between Charlotte Andergast (Ingrid Bergman, in what would be her last theatrical film) and her daughter Eva (long-time Bergman muse Liv Ullmann). The relationships are perhaps a bit more involved; Eva is married to Viktor (Halvar Bjork) and takes care of her severely disabled sister Helena (Lena Nyman). Eva’s relationship with her mother has always been strained, but when the film begins, she has reached out to Charlotte because of the death of Leonardo, Charlotte’s latest partner.

Charlotte is a successful concert pianist and has only rarely had time for her family. In her mind, the attachments to family could easily get into the way of her career and her music. Eva, abandoned on multiple levels and multiple times, chose to marry Viktor despite their age difference and despite the fact that she didn’t love him. Eventually, the two had a son named Erik, who died the day before his fourth birthday. In Eva’s world, Erik is still near her in some respects, simply on a different plane of existence.

Much of the film centers on Charlotte’s discomfort at being around Helena, who is largely paralyzed and has difficulty communicating. Because she knows that her mother finds Helena disturbing, Eva hid the fact that she takes care of her sister from her mother in her letter. For the first part of the film, everyone puts on a happy face and represses all of the emotions that they have kept down for most of their lives.

The entire story of Autumn Sonata is focused on the evening when all of this comes pouring out. Charlotte awakens from a dream in which she believes Eva is trying to kill her. She walks downstairs to discover that Eva is also not sleeping. What follows is a brutal discussion between the two of them, each accusing the other of terrible emotional crimes that have ruined each of their lives. Most of these come from Eva, who says that nothing in her childhood was right—she was either abandoned or smothered and micromanaged.

I’m not really doing the film justice with this. It really is entirely about this sort of pain inflicted on us by each other and how we react to that pain, how it shapes us and how it shapes the world that we then inhabit. It doesn’t feel like we are given much in the way of resolution until the very end of the film, and I’d rather not comment on that here. As filled with pain as Autumn Sonata is, it’s a film that should be personally experienced and not spoiled on a blog.

What surprises me the most here is the nomination for Best Actress. Believe me, I have nothing but love for Ingrid Bergman, but she was the wrong nomination. For my money, the pivotal sequence of Autumn Sonata is all about the performance of Liv Ullmann, who is absolutely gripping and heartbreaking at the same time. It might be the best thing she ever did on camera, and I’m shocked that she was completely ignored on all of the acting fronts.

The truth is, though, that there isn’t a great deal to say about Autumn Sonata that I haven’t already said. It movies very slowly until it all rushes out in a torrent, and this is really the entire point of the entire film. It’s good and it’s worth seeing. It’s not a pleasant journey, but it’s a journey worth taking.

Why to watch Autumn Sonata: It’s Bergman!
Why not to watch: There’s a lot of pain here.