Got the Death Row Blues 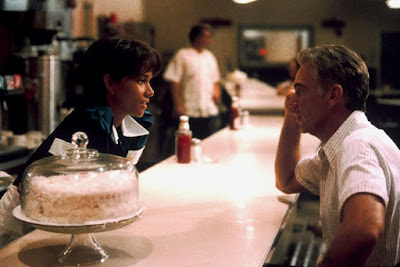 One of the truths of pursuing these Oscar lists is that I tend to watch a lot of dramas. If I’d been thinking when I started this, I’d have put special effects in as one of the categories of choice. At least then I’d get to watch some science fiction and action now and then. Instead, it’s a pretty steady diet of dramas, many of which are good but also lean toward the depressing. Monster’s Ball is one I’ve avoided until now because of that reason. There are a few others I haven’t gotten to specifically because I’m not always in the mood to watch something that makes me want to sit in a rainstorm until I die.

The high concept/elevator pitch for Monster’s Ball is that a man who works in the state penitentiary and assists in executions falls in love with the widow of one of the men he helps execute. Sounds fun, right? Oh, the reality of it has so much more misery and pain in it. Honestly, that as a plot should be enough, but we’ll get a couple more deaths along the way and we’ll be spending a good amount of the film wallowing in the misery of people who are the cinematic equivalent of red-headed stepchildren.

Hank Grotowski (Billy Bob Thornton) is a prison guard. He lives with his infirm father Buck (Peter Boyle), a racist former prison guard and his son Sonny (Heath Ledger), who also works at the prison. As the film starts, the prison is preparing to execute a man named Lawrence Musgrove (Sean Combs). Before his execution, Musgrove is visited by his wife Leticia (Halle Berry) and their son Tyrell (Coronji Calhoun). Musgrove is executed, but his final walk is marred by Sonny’s inability to handle the execution; Sonny vomits and collapses.

This angers Hank and the two argue. The fight gets to the point where Sonny threatens his father with a gun and accuses Hank of hating him. Hank, who has spent the bulk of the film to this point almost emotionless, confirms that he hates his son and Sonny response by turning the gun on himself and shooting himself through the heart. Neither Hank nor Buck seem that moved at Sonny’s funeral, but Hank soon resigns from his position at the prison and buys a gas station.

Meanwhile, Leticia is dealing with the death of her husband, her son’s weight problems, her inability to fix her car, and the pending eviction notice on her apartment. She gets a job as a server at the restaurant where Hank tends to eat ice cream. The two barely interact until one night Hank sees her on the side of the road clutching her son. Hank stops to help; Leticia is hysterical because her son has been sideswiped by a passing car. Hank drives them to the hospital but Tyrell dies on the table. See how much fun this movie is?

Eventually, Hank offers Leticia a ride home from work and the two begin a sort of affair that really seems much more like two desperately lonely and depressed people clinging to each other for anything. IMDB calls Monster’s Ball a romance, and I suppose in a certain light it kind of is one, but I’m not really prepared to call it a romance when it’s much more desperation. So what are we going to deal with in the third act? Well, remember up top when I said that Hank lives with his father? And that his father is a racist? Yeah, that’s where we’re going. And, of course, there’s the reality that Hank was present and the execution of Leticia’s husband and he knows this fact long before she does, so we’ve got that coming as well.

Monster’s Ball is one of those “misery parfait” movies that I seem to frequently encounter, films where nothing good happens for anyone in the film when all we as the audience want is for anything good to happen for anyone. The characters are so completely miserable that it’s not difficult to be empathetic toward them, but at the same time, it’s hard not to want to stick one’s head in the oven every couple of minutes.

I hate reviewing films like this because they put me in a terrible position. On the one hand, it’s hard not to say that this is a well-made film all the way around. I like the cast almost to a person—there’s a small role here for Mos Def as one of Hank’s neighbors and I like him in the role, too. Billy Bob Thornton plays Hank as a man afraid of his emotions and completely unreadable on the surface but roiling with emotion underneath. It’s also a solid performance from Halle Berry, who of course won the Oscar for it.

But Jesus, I spent the entire film just wanting something good to happen to someone. There’s got to be a better way to spend 112 minutes, doesn’t there?

Why to watch Monster’s Ball: Monster performances.
Why not to watch: How much misery does your life need?