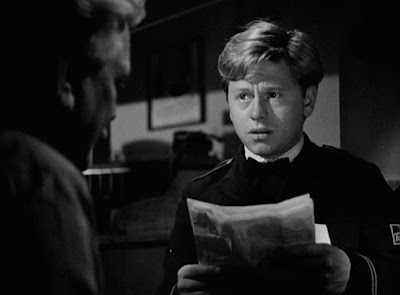 Usually, I can figure out what a movie wants to be and can state that in a sentence or two. With The Human Comedy, it’s not that easy. The Human Comedy is a film that can only be described as a character study, but not one of a specific person. This is more a character study of the American way of life. It’s a study of life in the mythical small town of Ithaca, California, where everyone is friendly, fights are quickly broken up, boys marry their high school sweethearts, and even acting out is treated with a lecture instead of anything like punishment. It’s absolutely idealized in every respect. It’s America as it’s supposed to be, not as it actually is or was.

The film takes place in the present of when it was made, right in the heart of World War II. Initially, the story comes from the point of view of Mr. Macauley (Ray Collins), a man who died for unexplained reasons a few years before. He is sort of watching over his family as best he can, and while he does show up now and then in narration, most of the time we just get the various doings of the Macauley clan. While we spend a little time with Ma Macauley (Fay Bainter), daughter Bess (Donna Reed), and youngest son Ulysses (Jackie Jenkins), we are mainly focused on Marcus (Van Johnson) and Homer (Mickey Rooney, who was Oscar nominated for this role). Marcus is heading off to war and with the father dead, it falls to Homer to be the man of the house. Homer is still in high school, but as the film starts he has landed a job as a messenger and telegram delivery boy.

And…well, that’s pretty much it. Like I said, there’s not so much a plot here as there is a series of events that make up a totality of life in America during the war. Homer delivers telegrams from the War Office telling people that their sons, brothers, husbands, fathers have been killed. But life continues to go on—he wants nothing more than to win the 220 low hurdles at a track meet and to prevent his mother from worrying about him. Marcus adapts to life in the Army and befriends Toby (John Craven), who was raised as an orphan. Toby is fascinated by the idea of Ithaca and decides that should he survive the war, he’d like to go to Ithaca to live.

That’s the whole movie, and because of that, it doesn’t hold up particularly well. I imagine that in 1943, though, it was a story that played very much to the hearts and minds of the American people, already becoming weary of the war. The Human Comedy is not at all about winning the war or much in the way of supporting the war effort (although there are plenty of “buy bonds” messages throughout). Instead, this seems to be more an attempt to sympathize with those people left on the home front. This is a way to show solidarity, to show those still at home that what they do has value.

The Human Comedy has a number of good performances. Rooney, for his part, is good in the role of Homer Macauley. Rooney, like a number of other actors, is the sort of person who is easy to like very quickly on screen. It helps that Homer is a nice kid, the sort of kid who wants to do his best and be the best that he can be. This is naturally true of the entire Macauley family, and by extension the entire town of Ithaca. When a group of boys attempt to steal apricots from the tree of an old man, he doesn’t object, wishing only that the apricots could be ripe for them. It’s almost ridiculously idealized.

It leaves me in a quandary, though. The Human Comedy is a difficult film to dislike because it seems so harmless and because it does feel so pure in what it wants to do. But it doesn’t ever go anywhere. The last fifteen minutes are supposed to be a surprise, but really aren’t shocking at all provided you’ve seen a movie before.

Ultimately, then, The Human Comedy is a well-made film that doesn’t go anywhere. Admittedly, it doesn’t really need to go anywhere other than giving us that glimpse of life, since this is what the people of 1943 needed. Today, it doesn’t hold up as well, but it remains interesting as a snapshot of its time.

Why to watch The Human Comedy: A true slice-of-life of America at war.
Why not to watch: Plot? What’s that?

Posted by SJHoneywell at 6:50 PM