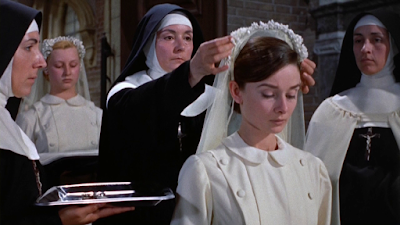 There are only so many movies with heavily religious themes that I can handle at a time. I recorded The Nun’s Story not that long ago and decided that today was a good day to watch a 2 ½ hour movie filled to bursting with religious themes. I guess what that means is that I probably won’t watch another film like this for a month or so. There’s only so much holy-holy-holy I can handle before my head just splits open.

Fortunately, The Nun’s Story is less sanctimonious than are many films of this stripe (Song of Bernadette comes rushing to mind). Instead, this is far less about the spiritual journey being taken and much more about the struggle of living the life depicted. We get very little of our main character’s life before the convent—this focuses almost entirely on her life as a nun and what is expected of her and what happens to her.

In late 1920s Belgium, Gabrielle van der Mal (Audrey Hepburn) enters the local convent as a young woman, and as one of a number of other applicants. It is clear that her family is not keen on this decision of hers, and the reason is soon evident. This particular order is dedicated not merely to a life of quiet contemplation, but of the complete destruction of the self. The sisters are permitted nothing of their former lives eventually, and even mentioning their family is cause for penance. It is a life of complete subjugation and humility, the sort of place where expressing a particular desire (Gaby wants to work as a nurse in the Congo) is the best way to ensure that this desire will never be fulfilled.

The early years are tough, and Gaby struggles against the structure of the convent and the requirements placed on her mentally and emotionally. Eventually, like all of the sisters, she is forced to keep a journal with her and write down everything that she does that goes against her order’s vows in even the smallest way. There are long periods of required silence, and, even though she is trained as a nurse and works as a nurse, the laws of the convent come first—no matter what she is doing, the call to mass always takes precedence. Her biggest issue is one of obedience; she is required to be obedient in all things, and the lesson we are taught over and over is that much of this obedience is tested in ways specifically to ensure that she doesn’t get what she wants. Eventually, she is entered in as a nun and is given the name Sister Luke.

I was with The Nun’s Story until about an hour in. While Sister Luke is training for work in the tropics, she is confronted with the knowledge that one of her fellow sisters dislikes her for her skill and knowledge. Sister Luke has tried her best to help her, but the other sister—already a veteran of the Congo—has accused Luke of pride. The cure, Sister Luke is told, is to purposefully fail her final examination to allow the other sister to be more successful. Luke struggles with the lesson in humility and decides to do her best on the examination anyway. As a “reward” she is sent not to the Congo but to a psychiatric hospital instead. It’s eventually corrected (Luke is told that the other nun was out of line), but in the moment, it’s pretty damn awful.

This constant disappointment in what she is asked to do never ends. Sister Luke does eventually get sent to the Congo where she has always wanted to work in the bush with the natives. But no, that’s not going to happen. Instead, she is stationed at a hospital, and she is happy with that assignment until she discovers that she doesn’t get to work in the native hospital but in the white hospital as a surgical assistant to a doctor named Fortunati (Peter Finch). There is some level of attraction between Sister Luke and Fortunati. That Fortunati is not a Catholic (and may not even be (gasp) a believer at all) causes some tension between them. Fortunati is more than willing to ask pointed and personal questions of Sister Luke, knowing that however she answers will force more penance upon her. Eventually, Sister Luke comes down with tuberculosis, a diagnosis that requires her to return to Belgium, but Fortunati works out a cure and she stays. Eventually she is sent back as the only nun available to escort a person who has become mentally unstable.

Back in Belgium, war is brewing, and the requirements of her service require Sister Luke to not take sides in the coming war regardless of what might happen around her. That’s a lot to ask when your country is being invaded and your brother is fighting for the Belgian Army. Then again, the vows of her order require Sister Luke to give up such worldly concerns as her family.

I’d be lying if I said I went into The Nun’s Story completely optimistic despite the presence of the radiant Audrey Hepburn. In truth, it wasn’t as bad as I feared, but that is specifically because Sister Luke is constantly fighting—mentally, emotionally, and spiritually—against the ridiculous demands of her order. The order claims that it is on a constant quest for perfection, but how perfection is defined is so unbelievably demeaning and awful that I can’t help but think that it would need to be fought against. Sister Luke even spells this out at one point, saying that even if she were successful it fulfilling all of the requirements of the order, she would fail because her success would make her prideful.

So, my objections aren’t that hard to figure out. It’s entirely the religious portions of the film to which I object. Sister Luke is an interesting character in a film that, sadly, wants to hammer out everything that is interesting about her. Seeing her struggle is worth seeing. The idea that giving in on this struggle and completely giving over any ambition, thought of self, or desire is one I simply can’t abide.

Why to watch The Nun’s Story: Audrey Hepburn was always worth watching.
Why not to watch: All nuns all the time!

Posted by SJHoneywell at 4:07 PM