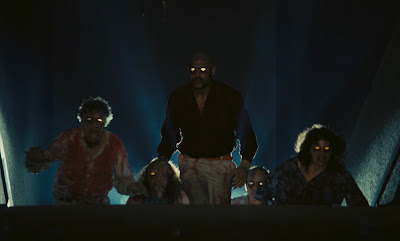 I always go into Italian horror movies expecting to like them. I genuinely do, and almost always I end up disappointed. The biggest issue with Italian horror is that it never really makes sense to me. Things just happen all over the place and there are monsters that appear out of nowhere and nobody makes any decisions that make any sense. Sure, there are a few that I respect, but in most cases I’m just left scratching my head. I went into Demoni (typically known as Demons) with that same hope that it would transcend the typical problems of Italian horror. Discovering that it was produced by Dario Argento and directed by Mario Bava’s sone Lamberto didn’t fill me with hope, though.

Inexplicably for an Italian film, we are in Berlin where Cheryl (Natasha Hovey) gets off her subway and is handed a ticket to a free movie playing that night. She begs for another ticket and she and her friend Kathy (Paola Cozzo) decide to skip their class that night and go to the movie. The arrive along with a lot of other people who have evidently also been given tickets. The theater is oddly decorated, including a mannequin sitting on a motorcycle and holding a sword. There is also a weird mask that Rosemary (Geretta Giancarlo) puts on her face. It scratches her. Think this will be important?

Anyway, the movie begins and we get a quartet discovering an old tomb that has (gasp) the same mask in it! And a dude puts it on his face! And then he turns into a demon! Guess what’s about to happen to Rosemary. Yep—the wound on her face explodes in a shower of pus and suddenly she is possessed and it’s time for her to start running through the theater turning other people into demons, too. This is going to be the theme for most of the rest of the film. Cheryl and Kathy are picked up by a couple of guys named George (Umberto Barberini) and Ken (Karl Zinny) who sit with them during the movie and then try to protect them when the demons attack.

Here’s where I tend to have problems with Italian horror, though. There are a few other sets of people in the theater—a young couple, a blind guy (in a movie theater?) with his niece—who sort of have stories that are a part of the film but really don’t go anywhere. Nobody cares at all about these people. They’re cannon fodder, after all, and we’re pretty sure that they’re going to be cannon fodder, so when they get their throats ripped out or bitten or otherwise attacked, nobody cares.

There’s a great deal of Demoni that is really reminiscent of both Evil Dead and of Romero’s first two living dead films. The demons evidently transfer their curse through any sort of wound—a scratch from one of the demons turns somebody into a demon pretty quickly just as a bite does. The actual demons themselves are really similar to the Deadites from Evil Dead. That’s true not just of their behavior but their appearance as well.

Sadly, Demoni suffers from the exact problem that many Italian horror movies do. So much of what happens seems to happen not because it’s relevant to the plot but because it’s an opportunity for a gross out. There’s a quartet of drug-fueled punks who show up outside the theater at one point and, scared by the police, break in so that they can be attacked by the demons, too. They are completely pointless to the actual story except to be an additional four victims. We’re not supposed to like them, we don’t like them, and when they get ripped apart and turned into demons, they’re just another collection of people turned into demons.

Ultimately, that’s my issue with Demoni entirely. Any good horror movie, or at least most of them, require the audience to actually care about the characters at some point and I don’t give a toss for anyone on screen. I think I’m supposed to but I genuinely don’t.

There’s some fun gore here, and Demoni is worth it for that. If you’re a gorehound, you probably won’t really care about the fact that the plot doesn’t make a damn bit of sense. It excels in that respect. It just doesn’t excel in being coherent.

Why to watch Demoni: Lots of gore that seems inspired by Sam Raimi.
Why not to watch: Like many an Italian horror film, it doesn’t make a great deal of sense.