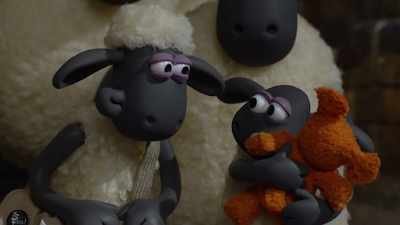 Typically with a movie designed for kids, you can expect a number of things. First, there will be a story that kids can relate to, which means that while we might get good characters and even a great deal of complexity, the actual story won’t be that challenging. Second, there will generally be jokes that are there specifically for the parents that the kids probably won’t get. Third and finally, there will almost certainly be a message along the lines of “be yourself” or “you can do anything you set your mind to do.” How interesting, then, that with Shaun the Sheep Movie almost none of this is true and yet we still get a film for children that is wildly entertaining an works on every level.

As the title of the film suggests, Shaun is a sheep. He lives in a small flock at Mossy Bottom Farm where he is the marginal leader, or at least the sheep who comes up with most of the ideas. He and the other sheep are bored by their daily routine, which causes them to concoct a plan to give themselves a day off. The bribe a duck to distract the farm dog Bitzer with a bone and then repeatedly jump over a fence in front of the farmer to make him fall asleep. Once he’s out, they lock him in his little camper trailer and prepare for a day watching movies and eating the farmer’s food. Bitzer figures things out eventually, but when he tries to wake the farmer up, the trailer breaks loose.

Through a series of events really only possible in an animated movie, the farmer ends up in the nearby big city and suffers a bonk on the head, which causes memory loss. Without him at home, nothing works right on the farm. Bitzer tries to rescue his master, but can’t get into the hospital. Shaun sneaks aboard a bus to look for the farmer as well and discovers that the rest of the sheep have followed him.

In the city, the problems of the sheep multiply. Not only do they need to find the farmer, they also need to continually avoid Trumper, an animal control officer with what is an evident true hatred of animals. They are assisted by Slip, a homely stray dog who also runs afoul of Trumper. Meanwhile, the farmer slips out of the hospital and finds himself in a hair salon where he gets a flash of insight, grabs a customer and sheers him like a sheep. The customer turns out to be a celebrity and he loves the haircut, turning the farmer into a new hairstyle celebrity dubbed Mr. X.

So, the story ultimately is Shaun, Bitzer, and the flock trying to help the farmer regain his memory, return to the farm, and at the same time manage to keep out of the grasp of Trumper. That’s really all there is to it.

Quite a bit is unusual about Shaun the Sheep Movie. One of the better things is that this is traditional stop-motion animation. Like all Aardman films, it’s gorgeous work, incredibly detailed and beautiful to watch. The film itself runs about 80 minutes before the final credits, and I imagine this is a couple of years of work for the animation team, each frame painstakingly made. This is a labor of love, though, the sort of thing that many more modern animated films seem to have lost.

Better, there isn’t a “message” here beyond being happy in your own life. Shaun wants to have a day off and discovers that the life he already had was pretty good. There’s nothing life changing about Shaun the Sheep Movie, and even with this, I’m struggling for a real overriding message of the film. It’s really little more than a jaunt with a lot of jokes, a lot of crazy coincidences and events, and a happy ending to tie things together.

There aren’t a lot of jokes here specifically for the parents, and it doesn’t really need them. Any jokes that will go over kids’ heads are ones that will also be lost on many a parent watching the film, and missing these doesn’t detract from the story. Like many other Aardman films, Shaun the Sheep Movie makes reference to classic films—there’s a bit near the end straight out of The Night of the Hunter, for instance, that will certainly please a lot of cinephiles. But that’s a joke easily made, detracting nothing from the story, and that will only be spotted by those looking for it. The film works without these references just as Chicken Run works without knowing it’s a riff on The Great Escape.

Yes, it is simple, but this is a story that little kids will enjoy quite a bit, and it needs to be a little simpler for kids who haven’t yet started school to be able to follow it. Shaun the Sheep Movie adds complexity not in the story itself but in the events that happen.

Is this going to become one of my favorite animated movies? No, probably not. But it’s harmless, sweet, and genuinely funny in a lot of places. It plays out like a modern silent film in many ways, copping not only some of the better extended action sequences and contraptions from great silent comedies, but also doing the whole thing without any real dialogue. It’s a master’s class in storytelling, even if that story is ultimately very simple.

Truth be told, I laughed out loud in a couple of spots, and that’s rare for me. That’s as good a seal of approval as I can give it.

Why to watch Shaun the Sheep Movie: It’s pretty cute.
Why not to watch: If you’re looking for a lesson, you won’t find it here.