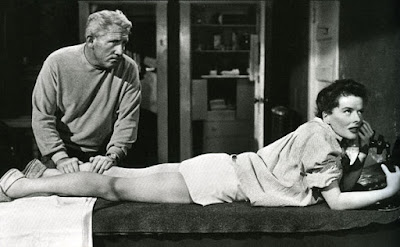 I’m evidently on a short sports kick. Yesterday’s movie involved sports and so did today’s. It’s also a Tracy/Hepburn collaboration, and that bodes pretty well. Even better, Pat and Mike is said to be Katharine Hepburn’s favorite of her nine movies with Spencer Tracy. Pat and Mike is a light comedy with a few fun surprise appearances in minor roles. It’s the sort of movie to watch when you’re not in the mood to be challenged by anything, and that’s more or less the mood I was in this evening.

Pat Pemberton (Katharine Hepburn) works in physical education and is an accomplished athlete. In fact, she has only one significant problem: whenever she’s being observed by her fiancé Collier Weld (William Ching, who looks sort of like a budget Peter Graves) she falls to pieces and can’t do anything right. We’re shown this in a golf match as the film opens. Pat loses a match embarrassingly to another woman who keeps up a constant litany of advice on how to play golf better. The match over and Pat at the end of her rope, she sees a set of golf balls teed up and drives them all perfectly down the fairway. A bartender at the country club notices and decides that Pat has some real talent and should play for an upcoming title. Pat quickly quits her job and decides to go for it.

Pat qualifies for the tournament and is soon accosted by Mike Conovan (Spencer Tracy), an agent with a shady reputation. Mike would like Pat to come in second, suggesting that if she throws the match, they can all make a good amount of money. Pat is appalled at the thought and makes it to the finals (against Babe Didrikson Zaharias, no less) and is leading going into the final two holes. But, lo and behold Collier shows up and Pat falls to pieces and loses. Mike would still like to represent Pat, though, but she’s not interested.

Since Pat is no longer working, Collier wants to get married right away, but he’s not very supportive of anything that Pat wants to do. Angry, Pat runs off to New York and decides to sign with Mike (hence the name of the movie). She tells him that she’s only been playing golf for a year or so and that she’s better at tennis, shooting, and a few other sports. Now seeing dollar signs, Mike decides to start staging matches with Pat against other athletes across the country. We also learn that Mike is managing a punch-drunk boxer named Davie Hucko (Aldo Ray) who seems frustrated by Mike’s sudden shift in attention to Pat and away from him.

There are three plots that run through the rest of the film. The first concerns Mike’s attempt to keep Collier away from Pat since he’s such a terrible jinx to her. The second is that Mike’s business partners show up, and his business partners are unsavory mob types (one of whom is played by Charles Bronson when he was still Charles Buchinsky) who want Pat to continue to throw matches so that they can win on her losses. Third is that Pat and Mike start developing feelings for each other, and no shock there.

So, there are absolutely no surprises in Pat and Mike in the plot, and there really aren’t intended to be any. The surprises come from the cast. For people in 1952, the joy wasn’t merely seeing a Tracy/Hepburn comedy but in seeing some sports heroes of the day showing up and playing themselves. Babe Didrikson Zaharias is probably the only one who has some name recognition today, but back then, I would imagine seeing such athletic notables as Gussie Moran, Don Budge, Alice Marble and a few others would have been fun. For modern viewers, seeing a youthful Charles Bronson is a lot of fun. Even more fun is a scene that involves Bronson, Chuck Connors in his first credited role, and Carl “Alfalfa” Switzer. It’s something of a joy.

Pat and Mike is harmless comedy. There’s a bit of wackiness leading into the final few minutes. We also get the real colors of Collier toward the end and the way that he truly thinks about Pat, which is also not much of a shock. In fact, the actual ending isn’t a shock at all. If you’ve ever seen a movie that involves sports or a comedy that involves a budding romance, you won’t be surprised by a damn thing that happens in the last 10 minutes.

It kind of doesn’t matter, though. Pat and Mike isn’t intended to be a challenging film or daring or anything other than a breezy comedy that gave Kate Hepburn a chance to show off her athletic chops. I’m not sure it’s a film that can really be disliked, and I didn’t dislike it at all.

Why to watch Pat and Mike: Tracy and Hepburn were always fun together.
Why not to watch: It’s pretty obvious where it’s going.