Films: The Battery
Format: DVD from NetFlix on various players.

This is the fifth in a series of twelve movies suggested by Nick Jobe. 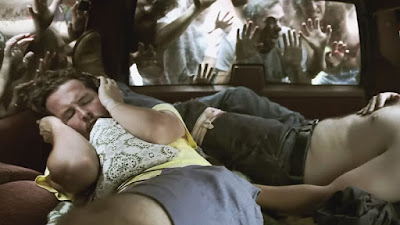 Some words or phrases, when spoken in the context of being about movies can call up a variety of images. One of these is “low-budget.” Others are “indie,” “indie horror,” and “zombies.” With The Battery, we’re getting all of that. Some people react well to indies and indie horror movie, while I take a wait-and-see approach. I’ve seen some gems, but I’ve been burned. The same is true of low-budget films. Plenty of films are great without much in the way of money while others rather significantly display their lack of a budget like a badge of honor. For many, the zombie genre is played out. Fortunately, films like The Battery show there’s still a little juice left in the…uh…battery.

While this isn’t clearly a zombie movie from the opening scene, it becomes obvious in the title sequence as we see our two characters Ben (writer/director Jeremy Gardner) and Mickey (producer Adam Cronheim) dealing with the undead. Ben and Mickey are truly a battery in the baseball sense of the word. Spare, slightly ranging Mickey (pitches right, bats right) was a relief pitcher while bulkier, lumberjack-bearded Ben (throws right, bats left) was a catcher. The two are the only survivors of having been trapped in a house in New England for months and now simply roam the countryside, never spending more than a night in one place and never indoors, per Ben’s paranoia of being trapped again.

The truth of the relationship is that Ben is a survivor and Mickey has merely survived. Ben has racked up an impressive number of zombie kills, either with a pistol or a baseball bat, while Mickey has avoided this entirely. Ben learns survival skills, fishing for fresh food while Mickey burns through double-AA batteries listening to music on headphones. At the basest level, Ben is learning to survive in the world that currently exists while Mickey is dreaming of returning to the pre-zombie apocalypse world.

Complications arise when the pair locates a set of walkie-talkies in the house of Mickey’s presumably zombified or eaten girlfriend. Experimenting with them, they discover chatter from a group calling itself the Orchard and break into a conversation involving a woman named Annie (Alana O’Brien). They are told to get off the channel and not to look for the Orchard. Mickey, still dreaming of civilization, wants nothing more than to find them and ingratiate himself into whatever that organization is. After all, what he really wants is a taste of civilization, or at least people.

This eventually leads to the conclusion of the second act when Ben and Mickey actually do run into Annie in a chance meeting. This ends up with Ben shot in the leg, the boys’ car keys tossed into a field, and their car surrounded by a zombie horde. And this, unfortunately, is where the movie takes a dip for me. I get exactly (I think) what was intended with the final half hour or so of the film, but watching Ben and Mickey trapped in a small station wagon drags on for too long. Eventually they attempt to get out, a process that also takes too long for my money.

Really, though, that’s my only complaint about The Battery, and it’s something that could perhaps be solved with a five-minute trim. And yet, despite the fact that I do think the ending drags on too long, I’m not sure cutting it would help much. It almost has to be what it is to build up to what it wants to be. Gardner may have written himself into a corner, but he does extricate himself reasonably well. It just seems longer than it really has to be to make the point it wants to make.

Where The Battery really works, though, is the place where plenty of horror movies fail. Too many horror movies simply give us a collection of people, not characters, so that when one of them is in danger, we’ve got nothing at stake. Ben and Mickey get into several moments of genuine peril, and the film has been smart enough to give us characters that we actually like being around and who we genuinely want to see survive. Too many horror movies forget that it’s not about the gory kills or the splatter, but about the people inside the story that make it worth watching, and The Battery has this in spades.

Gorehounds won’t find a great deal of interest here. Whether it was from budget reasons or story reasons, there isn’t a great deal of actual zombies until the end of the film. There are enough to keep the theme alive, but some horror fans who are more interested in seeing the splatter will be disappointed. I wasn’t—I wanted more time with the characters themselves.

The Battery is yet another proof that good story and real characters will always win out over glitz and effects. There’s substance here and that makes all the difference. Nick, this was a solid win. You’re 4 for 5, and no “close call” about this one.

Why to watch The Battery: A horror movie with characters worth caring about.
Why not to watch: The third act drags.