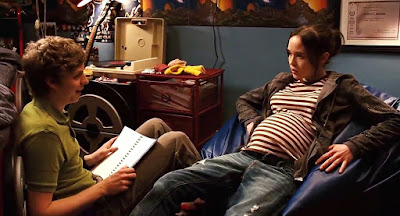 Juno is one of those movies for me. I’ve been a little scared of it for some time because I figured it probably couldn’t live up to its hype. People seem to like it a little too much for what it is. It’s a teen pregnancy comedy, at least on the surface, and it was nominated for four major Oscars, winning one (original screenplay). Sure, it’s got a solid cast and a lot to recommend it, but I struggled with the idea that it could be the sort of end-all, be-all that everyone seems to think it is.

Juno MacGuff (Ellen Page), a 16-year-old high school student, gets pregnant one night thanks to her best friend/love interest Paulie Bleeker (Michael Cera). Initially intent on getting an abortion, Juno instead decides to have the baby and put it up for adoption. With the aid of her friend Leah (Olivia Thirlby), Juno finds Vanessa and Mark Loring (Jennifer Garner and Jason Bateman), a local couple who would love to adopt her child. At least that’s what they think initially. After all, there wouldn’t be a movie if there weren’t some problems along the way.

Really, though, that is the main plot. Juno’s parents are the most relaxed grandparents-to-be in movie history. While neither her father Mac (J.K. Simmons) nor her step-mother Bren (Allison Janney) are pleased with Juno’s pregnancy, they decide that the best thing to do is to support her in the decision. Sadly, neither of them fit into the overall story too much. Bren has a couple of good scenes (like when Juno gets an ultrasound) and Mac is clearly the most supportive father in human history, but they are supporting characters in the truest sense. They are great additions to the story, but completely tangential to the plot.

Really, the story is about Juno’s relationships, and primarily her relationships with Bleeker and with the Lorings. Juno and Bleeker rather clearly and awkwardly love each other but are also completely unwilling to make that a thing between them. Juno seems to want Bleeker hands-off with her pregnancy and Bleeker seems to just want things to go back to the way they were and also seems to be sure that they can’t. In fact, Juno’s relationship with Bleeker seems to be much more about her in the context of the film. While he is clearly important in the overall narrative, we don’t actually get much about him. We don’t know his opinion on whether or not Juno should have the baby or what.

The Lorings are a lot more interesting in that respect. Initially, Juno bonds with Mark. Mark used to play in a band and lived sort of a wild and crazy life. Now he writes jingles for advertising. He likes the same kind of gory horror movies Juno favors and the two argue about the relative merits of different bands. Vanessa seems almost oppressive early on, desperately wanting a child more than anything and determined to paint herself as the perfect prospective mother. It’s not until Juno sees her playing with a child at the mall that Juno realizes Vanessa is the person she wants taking care of her child. Of course, part of the reason Juno bonds with Mark has a case of (wait for it!) arrested development, and isn’t sure that being a parent is everything he wants to be.

The biggest bright spot is simultaneously the biggest problem with Juno, and it’s Juno herself. She is far too self-aware as a 16-year-old. She is far too capable of making references to obscure things that only the rarest of people several years older could make. She is less a character and more a bundle of different quirks loosely tied together in a pregnant body. Sure, that’s the draw of the character, but it’s also the thing that makes the character unbelievable to me.

“But Steve,” I hear you say, “Why couldn’t there be this sort of completely precocious character wandering around out there?” Oh, I suppose there could. But here’s the thing—I live with an extremely precocious 17-year-old. This is a kid who left high school two years early and is pulling close to a 4.0 as a college junior. Someone with her own set of quirks (like all of us), able to make a few obscure references of her own, and I defy her to make a comment involving Soupy Sales or Dario Argento. Juno is too much a character, too much a platform for witty banter and the perfect line, and that makes it difficult for me to accept her as anything but a tightly-written movie character.

No, for me the real stars of this film are J.K. Simmons and Allison Janney, both of whom I would happily watch in just about anything. Janney is a wonder tearing a new asshole into the ultrasound tech and is marvelously entertaining on screen. Simmons makes as much as he can out of a role that in many ways is as overwritten as Juno’s.

So, ultimately, the truth is that Juno didn’t live up to the hype. Don’t get me wrong; it’s good. I’d watch it again. But honestly, there are plenty of other movies I’d probably want to watch first instead.

Why to watch Juno: J.K. Simmons and Allison Janney are completely underrated.
Why not to watch: It relies too much on quirky.