The Queen of MGM

Films: The Divorcee; A Free Soul
Format: DVD from NetFlix on laptop. 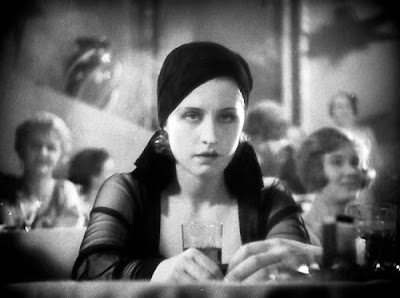 I’m always a little nervous when I dip really far back into Oscar history. Silent dramas and early talkies are especially difficult; they tend to pile on the melodrama and present us with characters that couldn’t exist outside of a farce even in a serious drama. There are exceptions, movies that manage to avoid the feeling of actors on a stage playing to the back row. There are other issues as well. No matter what the film or the genre, there apparently has to be a love story wrapped up in the proceedings. There also seems to always need to be a comic character, as if the film wouldn’t be complete without someone playing the fool. With The Divorcee we get kind of a mixed bag on all of these fronts; the film is clearly a product of its time, but it transcends that at times as well.

The Divorcee is a surprise because despite being pretty straightforward in where it’s going and melodramatic in its set-up, it’s actually entertaining. A gang of the idle rich are gathered together and Jerry (Norma Shearer) and Ted (Chester Morris) are off canoodling. They come back to the group and announce their engagement. Everyone seems to be pleased except for Paul (Conrad Nagel), who has carried a torch for Jerry for years. Upset and drunk and the party over, Paul goes speeding away with a few passengers and rolls the car over on a winding road. Everyone is unscathed except for Dorothy (Helen Johnson), who is badly scarred. Jerry and Ted get married. Paul marries Dot out of feelings of responsibility.

Fast-forward three years to the third anniversary of Jerry and Ted. Friends show up, but Ted is on his way out of town for a business trip. The friends who arrive include Ted’s best friend Don (Robert Montgomery) and Janice (Mary Doran), whom Jerry doesn’t know. Ted does, though—he had a brief affair with her, and during the get-together, Jerry finds out. Ted goes off on his business trip and Jerry goes out for a night on the town (and a bit more) with Don, settling the score. When Ted gets home, Jerry tells him that now they’re even but refuses to tell him with whom she slept to protect Don’s identity. Ted is completely offended by all of this and walks out and before you can say “Doodley-doodley-doop,” the two are divorced. Jerry proceeds to have a series of meaningless affairs and Ted throws himself into alcohol. Then everything changes when Paul wanders back into the picture, still married to the disfigured Dot and still carrying a torch for Jerry.

I don’t really want to say more. The Divorcee moves along at a pretty good clip, and it has to since it just cracks the 80-minute mark. The first act is surprisingly long—Ted and Jerry don’t split until the midpoint of the movie and Paul doesn’t show up again until the third act. That’s really the biggest drawback of the film. The initial set-up is really very good, but just when things really start to get interesting, The Divorcee is starting to wind down.

The only other significant drawback is Tyler Brooke, who plays the comic character Hank. I disliked him from the opening scene when he was mincing around with a ukulele. Sadly, he never gets any funnier. Remade today, Hank would be eliminated from the screenplay and the whole thing would be better off for it.

On the positive side, we’ve got Norma Shearer. Like Louise Brooks in Pandora’s Box and Paulette Goddard in Modern Times, Shearer could be plucked from The Divorcee and placed in a modern film and she wouldn’t look out of place. She is amazingly modern, not just in her appearance but in her screen presence. This is a woman who is comfortable in her own skin and comfortable in front of the camera. She’s completely magnetic and watching her work is an absolute joy.

The rest of the cast is decent if not exemplary. Chester Morris is kind of a lump on screen and really, Shearer is a better fit for Robert Montgomery’s Don—the two had played star-crossed lovers the year before in Their Own Desire, after all. But really, The Divorcee is a showcase for Norma Shearer slinking around in gowns and being romanced by foreign men with tiny mustaches.

What The Divorcee really needed was another 15 minutes. It’s just too short for the depth of drama it wants to create. Cut the simpering clown and give us a bit more complexity in the characters and the relationships, and this is a film that could be made today on a small budget with some newcomers to great effect. Then again, to do that, you’d need to find someone with the presence of Norma Shearer to handle the main role, because this is absolutely her film top to bottom. It’s too rushed and comes off a bit too shallow, but for when it was made, it’s surprisingly still effective. 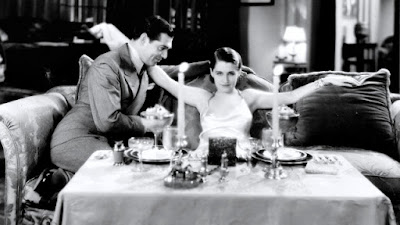 Discs that come with two movies are fun because there’s usually a connection between them. The Divorcee shipped with A Free Soul, a film from the following year that also landed Norma Shearer an Oscar nomination, won an Oscar for Lionel Barrymore, and launched the career of Clark Gable as a leading man. With those kinds of credentials, I have to say that I was pretty interested in what I was going to get.

Jan Ashe (Norma Shearer) is the daughter of criminal lawyer and accomplished alcoholic Stephen Ashe (Lionel Barrymore). While Jan is being romanced by the safe but eternally bland Dwight Winthrop (Leslie Howard), her father is defending a gangster named Ace Wilfong (Clark Gable without his trademark mustache). Jan bumps into Ace at the trial and is immediately attracted to him because, well, he’s played by Clark Gable and evidently women liked bad boys in the 1930s, too. Ace is immediately attracted to Jan as well because she’s played by Norma Shearer, and no other reason is really needed. A little courtroom theatrics on the part of Stephen Ashe gets Ace off from his murder charges.

To celebrate, Stephen goes on a serious bender and shows up late to the 80th birthday party of his mother (Lucy Beaumont), the feisty family matriarch. He brings Ace along to the party as well, and because of his unsavory reputation, the entire Ashe clan shuns him. Upset by this behavior and never one to give in to family pressure, Jan decides to go out with Ace on the town. A rival gang attempts to gun Ace down. The two run back to Ace’s hideout and Jan finds him all the more attractive because now he’s really demonstrated himself to be as dangerous as his reputation.

Of course, this is a romance that can’t happen. Stephen, even drunk off his ass as he consistently is, is opposed to his daughter hanging around with a criminal, and when Ace tells him that he wants to marry Jan, all bets are off. Jan and her father argue about Ace and about his drinking. Jan comes up with a plan. If he’ll stop on the sauce, she’ll give up Ace. To seal the deal, the two go off on a long trip out West into the middle of nowhere, bringing along only Eddie (James Gleason), Stephen’s right-hand man and the film’s comic relief. Stephen does get off the sauce, but the minute the trio returns to civilization, he gets roaring drunk and disappears on a train. Jan, the deal now off, goes back to Ace, who manhandles her for running away and demands that the two get married immediately.

Did you forget about Dwight Winthrop? You’d be forgiven if you did, but he’s going to return to deal with Ace Wilfong and Stephen will eventually be needed in the courtroom once again.

The only time I’ve ever really liked Leslie Howard was in Pygmalion. He is otherwise indistinguishable by me from Franchot Tone, about as exciting as plain yogurt. I have difficulty in seeing him as a romantic lead in general because he’s just so bland, and he’s bland in this, too. It works in the sense that there’s no question why Jan finds Ace a lot more exciting and attractive. Dwight is dull and there’s no getting around that.

The bigger issue, though, is that this is melodrama writ large. Shearer is decent, although there are a few reaction shots that wouldn’t be amiss if she were being tied to a railroad track. Gable is solid and interesting as Ace Wilfong; it’s actually not a surprise that he became a leading man after this role because he’s charming and dangerous. He’s interesting, and that makes him all the more compelling.

There’s some evidence that Lionel Barrymore won the Oscar because of a speech he gives at the end of the film, and this really is the best part of the movie. Barrymore had that great voice and he put all of his acting chops to work in this scene. It’s surprisingly effective, even if it does go straight for the waterworks.

A Free Soul, sadly, is more or less a curiosity because of the effect it had on the career of Clark Gable. It’s not notable for much else save Lionel Barrymore’s Oscar and the fact that Norma Shearer was always a joy to see in front of the camera.

Why to watch The Divorcee: Norma Shearer would fit in a current film perfectly.
Why not to watch: At 82 minutes, it could use another 15.

Why to watch A Free Soul: Among other things, it made Clark Gable a star.
Why not to watch: They couldn’t find anyone more interesting than Leslie Howard?