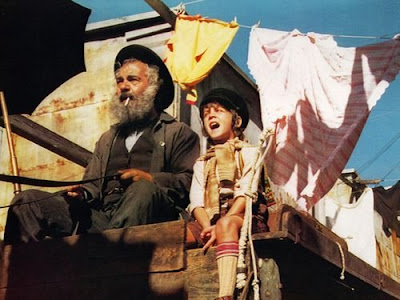 There are times when I take one for the team with this blog. With Lies My Father Told Me, I regretted my choice of movie immediately. In fact, the only thing that kept me going was the realization that if I didn’t watch it today, I’d have to watch it some time in the future. Worse, it’s exactly the sort of film that, frankly, kills my hit count. I don’t get miles of traffic on this blog, but when I review something that has fewer than 15 ratings and no reviews on Letterboxd, I know it’s a review that most people are going to look at, perhaps read this first paragraph, and then move on. Really, I can’t say that I blame anybody for not reading further. Really, you won’t offend me.

Lies My Father Told Me takes place in a Jewish ghetto in Montreal in the 1920s. Young David (Jeff Lynas) lives with his father Harry (Len Birman), his mother Annie (Marilyn Lightstone), and Annie’s father Zaida (Yossi Yadin). Zaida is a rag and bone man, wandering the streets of the ghetto, buying junk from the people who live there and selling it for a small profit. Harry doesn’t do much of anything. He attempts to invent new things for men’s fashion—pants that don’t need pressing and adjustable cufflinks, for instance, but his plans consistently fail and end up losing what little money he has borrowed from Zaida.

I’d love to tell you that there’s more here, but there really isn’t. Lies My Father Told Me is a coming-of-age story for David. What does that mean? It means somebody has to die and there’s really only one choice here. After all, the film is really about the conflict between Zaida and Harry, with David caught in the middle. The two men are complete opposites. Zaida is a traditional, hard-working man. He’s also deeply religious, proud of the fact that he’s never read anything but the Talmud. He explains everything as coming directly from God—when it rains, it’s because the ground has prayed for it.

Harry is completely secular. He’s also a layabout filled with get-rich-quick schemes that never go anywhere. He’s completely irresponsible. When he takes David fishing, they don’t actually go fishing but to a bookie where Harry bets on horses, then makes David promise not to tell anyone that they actually didn’t go fishing. So really, it’s not like the movie is even asking any difficult or deep moral questions, either.

More frustrating for me is the fact that David is a singularly annoying kid. I realize that it’s always kind of a crapshoot with a child actor and you never know what you’re going to get, but David is aggravating in virtually every scene he’s in. I’m not saying I’d like something bad to happen to the kid, but the movie would be better with less of him in it.

The truth is that Lies My Father Told Me commits the worst sin that a movie can. It’s not offensive, stupid, or even too long. It’s just really boring. Nothing really happens in the film. Zaida fights with Harry. Zaida fights with their neighbor, Mrs. Tannenbaum (Barbara Chilcott), a busybody who thinks she is better than everyone else and doesn’t like having to live in a neighborhood with Zaida’s horse. Harry comes up with ideas for new innovations for clothing but doesn’t have the skill to really pull them off. He fights with everyone. Neighbor Mr. Baumgarten (screenwriter Ted Allan) talks a lot about Lenin and Marx.

As much as I hate to say this, I stopped caring a short distance into this and gutted it out only so I didn’t have to start it over and work my way through it again in the future. Hester Street is a more interesting film about the Jewish immigrant experience from the same year and Fiddler on the Roof comes from the same era and is far more entertaining. Your time is better spent there, not here.

Why to watch Lies My Father Told Me: A classic immigrant story.
Why not to watch: Holy crap, it’s annoying.