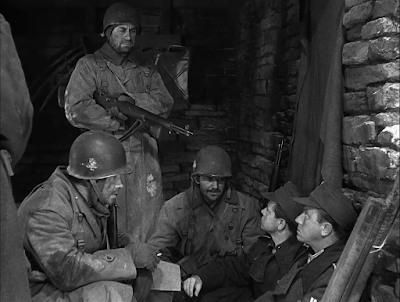 War movies are an interesting genre of film. When they are made during the course of a war, they are almost always propaganda affairs. After the war, they tend to focus more on stories from the war, whether these show things in a positive or negative light. Post-war films are often more character-driven or history-driven, which I find a lot more interesting than films that are morale-based. Battleground, I think, tries to be something based at least in part on character but is really much more about a historical event. We’re concerned with a group of soldiers certainly and while these soldiers are to be presented to us as individuals, they really aren’t. Each has a quirk that identifies him from the others, but we’re far more concerned with the fate of the battle.

It’s December, 1944 and Private Jim Layton (Marshall Thompson) has been assigned as a replacement into the 101st Airborne near Bastogne in Belgium. The men of the Screaming Eagles, all battle-tested, are less than welcoming to someone who hasn’t braved the same sort of combat they have. As Layton arrives, PFC Holley (Van Johnson) returns after recovering from a minor wound. The 101st is thrown immediately into battle despite being promised leave in Paris. Instead, this is the beginning of the Battle of the Bulge, and the German forces are advancing through the Ardennes right into Bastogne, putting the men of our chosen division directly into the firing line.

What follows is more or less a fictionalized version of the battle around Bastogne. The broad strokes are based on the real battle while the particulars are created specifically for the narrative. As is typical and mentioned above, we get a group of men that are mainly identifiable by a feature of their personality more than anything else. Spudler (Jerome Courtland) is a Southern boy who frequently repeats the same phrase. Kipp (Douglas Fowley) wears false teeth and frequently clicks them. Roderigues (Ricardo Montalbon!) is from Los Angeles and has never seen snow. Hansan (Herbert Anderson) keeps his watch set on Springfield, Illinois time.

The men we end up caring about the most are Layton, Holley, “Pop” Stazak (George Murphy), Jarvess (John Hodiak), and Sergeant Kinnie (James Whitmore, who was nominated in a supporting role). They advance, fight Germans, are pushed back, men die, artillery hammers them, they are surrounded, and of course the Battle of the Bulge is ultimately won by the Allied forces, ending the last great advance of the Axis powers in the war.

This is a history lesson more than anything else, and that is both the great strength of the film and its greatest weakness. It’s smart enough to avoid the idea of being a propaganda film. The American troops grumble and complain the way foot soldiers do in films like this one. What’s far more interesting here is that the American troops aren’t uniformly brave and forthright. They get scared and run off. They make mistakes and terrible decisions. They screw up, and that’s really interesting.

Unfortunately, that’s less interesting than it could be because the men are more those quirks than they are actual characters. I won’t go so far as to say that they are replaceable, but there are some who are killed who don’t leave a great deal of impact because we know very little about them beyond that particular quirk.

The saving grace is the history, and the history is very good. It’s an important battle in World War II history, and there’s a lot here that is worth seeing. It matters very little that the specifics of the story are fictional. What matters is that the 101st really was surrounded by enemy troops around Bastogne, really was outgunned and outmanned, really did hold out, and really was eventually relieved. It’s one of the great American battles of World War II, and for no other reason, it’s worth remembering.

It doesn’t hurt that Battleground is very well made. There are a few spots that look like a sound stage and the snow is pretty obviously fake snow, but these are quibbles for a film like this one. It won the Oscar for black-and-white cinematography, and it’s easy to see why it was nominated at the very least. It also won for its screenplay, and I like that nomination as well. Sure, we get very one-dimensional characters, but the dialogue is good and there are moments of character that shine through. This happens in pieces here and there, and moments almost of mass character. Layton, for instance, is treated with something close to contempt until he suddenly isn’t, and he is universally accepted as one of the group. It’s a great thing.

Battleground is far from perfect, but it’s damn good for what it is.

Why to watch Battleground: This is how old school war movies get done.
Why not to watch: You never get too much of a sense of most of the characters.