Film: The Remains of the Day
Format: DVD from Sycamore Public Library on rockin’ flatcreen. 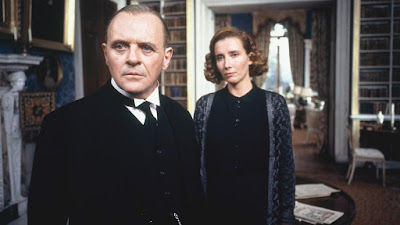 I like a good period drama now and then, and I have even liked my share of Jane Austen adaptations. That said, one of the issues of I have with British dramas from this era is that a part of me is surprised that anyone actually procreates. Everyone is so scared of his or her emotions and so terrified of physical contact that it’s a wonder the race perpetuated. Okay, I know that’s not actually true, but it is the way that romances especially are depicted from the Regency era through the Edwardian. Lemme tell ya, they ain’t got nothing on The Remains of the Day.

The film’s present is set in the 1950s, and as the film begins, a great English estate is auctioned off to an American buyer. This buyer is Jack Lewis (Christopher Reeve), a former congressman, who visited the home several decades earlier. The estate is slowly reopened after having been mainly shut down due to the death of Lord Darlington (James Fox) who had lived there. With a new family to live in the estate, a staff is again needed; the task of finding and hiring them falls to Mr. James Stevens (Anthony Hopkins), the head butler who has been with the house for multiple decades. Stevens recalls the housekeeper who worked at the Darlington estate in the 1930s and believes that due to her current situation, the former Miss Kenton (Emma Thompson) might be persuaded to return.

The Remains of the Day is primarily about the life of the Darlington Estate and the life specifically shared by Sarah Kenton and James Stevens who very specifically and regularly refer to each other as Mr. Stevens and Miss Kenton. When the flashbacks begin, we head back a good 20 years to the pre-war years where Lord Darlington has taken it upon himself to continue the work of Neville Chamberlain and the quest for peace in that time. Darlington undertakes this by convening a series of high-level international meetings to discuss the problems both encountered by and caused by a Hitler-led Germany in the 1930s. We’re led to believe through the film that Darlington’s motives are genuine but sadly misguided; appeasement was never going to work. This is as much called out by visiting American dignitary (and eventual Darlington owner) Jack Lewis at the first major meeting.

But just as life continues in the world, life goes on on the estate as well. Stevens’s father (Peter Vaughan, who looked old enough to play Aemon Targaryen in 1993) comes to work at the estate, but is too old to handle all of the duties of an underbutler and is eventually removed from a number of his duties. When he dies during the conference, Stevens carries on as if nothing has happened, convinced that the best that he can do is to continue to perform his duties as well as possible until he has time to grieve.

Stevens is the most singularly emotionally repressed human being in filmdom. Nothing evidently gets much under his skin no matter what is happening. When Darlington’s views are swayed more and more toward fascism and he forces the firing of two Jewish refugees from the estate, Stevens complies without a second thought. Sarah Kenton is not so emotionally repressed and, despite her obvious feelings for Stevens, is frequently appalled by his behavior. Eventually, when she can no longer handle the backroom meetings and appeasement occurring at Darlington, she accepts the marriage proposal from the butler of another dilettante lord and leaves service, hoping that perhaps Mr. Stevens will convince her to stay.

I seem to have somehow skipped any mention of Darlington’s godson Reginald Cardinal (Hugh Grant), a member of the aristocracy who has somewhat lowered himself by working as a member of the press. Cardinal serves as something of a moral conscience as much as possible, disagreeing with the positions taken by his godfather but finding himself conflicted because of the love he has for the man. All of this, including the moments where Cardinal tries to make it clear to Stevens that Lord Darlington has made some bad choices, is shown to us in service of Stevens attempting to bring Sarah, now Sarah Benn despite her divorce, back to Darlington with him.

The Remains of the Day is one of those movies nominated for a ton (8) Oscars, winning none of them. Nominations for set direction and costume design certainly go with the territory, and I’m a little surprised there wasn’t one for cinematography, because this is a beautifully shot film. It also manages to convey a great deal of emotion despite the emotional detachment of the main character. Hopkins and Thompson are brilliant, of course, since they generally are. This is a solidly-cast film top to bottom, though, with even small roles being filled by people who would go on to solid careers (Lena Headey, for instance) or by people who already had them. Not a single person feels out of place, and even Christopher Reeve—who should be out of place as an American buying a British estate—feels like he belongs.

If anything, it’s slow. The events of the many long flashbacks are far more interesting and engaging than the events of the present. That doesn’t hurt my opinion, though. The present is needed for the context, and the past takes up far more of the film anyway. But this does move by at a leisurely pace, and that’s going to bother some viewers.

I don’t know that I’ll watch it again, but I can’t say that my time was ill-spent.

Why to watch The Remains of the Day: It’s hard to resist the British at the end of the Empire.
Why not to watch: Evidently, feelings hurt.