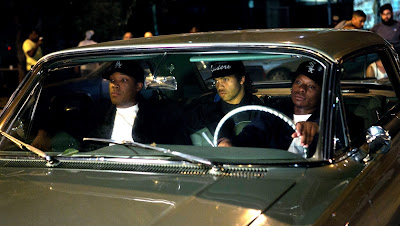 Every now and then, I watch a movie that makes me realize just how white I really am. Shaft made me feel white, Superfly and Boyz n the Hood made me feel even whiter, and Sweet Sweetback’s Badasssss Song made me feel translucent. I don’t know if any movie has ever made me feel whiter than Straight Outta Compton. I’m not going to pretend that I know anything about rap because I don’t. I’m not even going to pretend that I like rap that much; in truth I’m not that interested in music anymore at all. The challenge for a film like Straight Outta Compton for a late-40s white guy like me is to make me care about the story beyond the music. So, it’s a good thing that this is a hell of a story with a collection of great performances from newer actors and a seasoned professional or two.

We’re introduced to the members of N.W.A. and given a taste of their life in the first part of the film. Eric “Eazy-E” Wright (Jason Mitchell) deals drugs. Andre “Dr. Dre” Young (Corey Hawkins) struggles with wanting to spin records and with what his mother expects him to do. O’Shea “Ice Cube” Jackson (O’Shea Jackson Jr.—Ice Cube’s son) is a high school senior just trying to survive in Compton. Dre and Antoine “DJ Yella” Carraby (Neil Brown Jr.) spin at a local club. One night, Dre gets busted while trying to break up a fight. The next day, Eazy-E bails him out. Dre convinces E to start a record label. When their first act falls through, refusing to read Cube’s lyrics, the four along with E’s friend Lorenzo “MC Ren” Patterson (Aldis Hodge) and Dre’s friend The D.O.C. (Marlon Yates Jr.) perform the song themselves and create their own label and the group N.W.A. And it’s a hit.

Eventually, E is discovered by Jerry Heller (Paul Giamatti), who gets N.W.A. and Ruthless Records signed to a label. A tour follows, and since the album Straight Outta Compton featured controversial single “Fuck tha Police,” problems with law enforcement, the FBI, and rioting follow as well. A bigger problem is that Ice Cube things that he’s getting shorted on money by Jerry, and after the tour, he leaves to branch out on his own. A battle of diss tracks follows, but eventually Dre feels like he’s getting shafted as well and leaves to form Death Row Records with Suge Knight (R. Marcos Taylor).

Fortunes change. People rise and fall. Wild parties are held and money is lost and possibly stolen. The D.O.C. is involved in a serious car accident, threatening his career on a mic. And just as the original members of N.W.A. are considering reforming and doing things differently this time, Eazy-E is diagnosed with HIV/AIDS.

I said at the top that I don’t know the music and I don’t really care about the music, and that’s the truth. I don’t, really. I don’t specifically object to it, but rap doesn’t really speak to me the way that other music does at times and used to speak to me in the past. So, what’s important for me here is having a compelling story and compelling characters. Straight Outta Compton has that to the point that the music was actually almost a non-factor for me one way or the other.

That said, having O’Shea Jackson Jr. playing Ice Cube is a piece of brilliant casting. As Ice Cube’s actual son, he looks a lot like his father. More importantly, he sounds like Cube. I like Ice Cube as an actor and have for a long time, so having someone portray him really well is a benefit to the film. The other actors look a good deal like their real-life characters as well, and again, this only helps with the overall feel of the film.

It’s the screenplay that was nominated, so I should give it some time as well. Straight Outta Compton covers a lot of stories simultaneously. When the group has broken up, we need to follow Cube, Dre, and Eazy-E and the three of them are rarely on camera at the same time for a good chunk of the film. None of this gets confusing, and the screenplay is smart enough not to ever feel like it’s biased toward one point of view or another. All three seem to get fair treatment, warts and all. Certainly there is some fictionalization going on here, but since Cube, Dre, and E’s widow all produced the film, it’s perhaps not too difficult to expect that it’s going to be a positive portrayal in general.

The truth is, I didn’t know what to expect with Straight Outta Compton and I found that I liked it a lot more than I expected to, which is always pleasant. I like that even though a great deal of this is serious, it still has fun in a few moments (there’s a tremendous “Bye, Felicia” moment at one point, for instance). I expect big things out of some of these actors in years to come; it’ll be interesting if Straight Outta Compton proves to be as pivotal in the lives of these actors as it was for the men who made the record of the same name.

I’ll go so far as to say this—based on the Best Picture nominations I’ve seen from 2015, I’d have nominated this one.