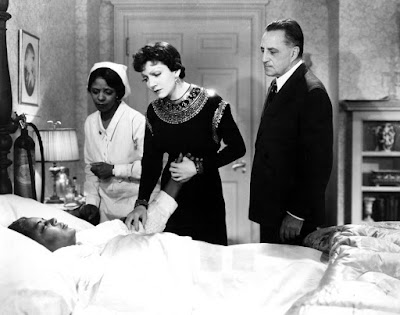 Movies like Imitation of Life are simultaneously fascinating and frustrating. It’s fascinating because it was made in 1934 and deals at least in part with ideas of race that seem far ahead of its time. On the other hand, it’s extremely frustrating because it deals with race in a way that to modern sensibilities seem so backward and racist that it’s at times painful to watch. It’s doubly frustrating because it brings up some really interesting ideas of race and then focuses instead on a romance that has nothing to do with the questions that are the most interesting.

Imitation of Life starts by introducing us to Beatrice Pullman (Claudette Colbert), a widow raising a young daughter named Jessie (played in succession by Juanita “Baby Jane” Quigley, Marilyn Knowlden, and eventually as an adult by Rochelle Hudson. It’s worth noting that in the 1935 Les Miserables, Marilyn Knowlden and Rochelle Hudson played the same role, too). Her husband was killed in a train accident and, needing an income, Bea has attempted to take over his business selling maple syrup with not very good results. On the particular morning of the film’s beginning, Bea’s morning is interrupted by the arrival of Delilah Johnson (Louise Beavers), who is looking for work as a housekeeper. Bea can’t afford a housekeeper, but since Delilah and her daughter Peola (Sebie Hendricks, Dorothy Black, and then Fredi Washington) will essentially work for room and board, Delilah gets her job.

It’s an important plot point that Delilah makes a mean pancake. Bea realizes that she might have a goldmine on her hand. Using Delilah’s recipe and the maple syrup she’s been trying to sell, Bea opens a restaurant that is soon enough of a success to pay off Bea’s and Delilah’s debts. Meanwhile, Peola is attempting (and succeeding) at passing as white since she is particularly light complexioned. Peola really wants to be white, a theme that will run through the entire film, even if it’s not really capitalized on that much.

One day, a stranger named Elmer Smith (sour-voiced character actor Ned Sparks) shows up at the pancake diner and makes a simple suggestion—they should box their pancake flour and sell it. Bea does, makes Ned her office manager/business partner, and becomes a very rich woman. However, stuck in the racism of the time, Delilah refuses to stop being Bea’s housekeeper despite being offered a 20% share of the company (which uses her likeness Aunt Jemima-like). See, in the world of Imitation of Life, Delilah is simple and sees Bea’s offer not as making her financially independent, but as a rejection. Peola, meanwhile, is sent off to a black college in the South, but leaves and gets a job at a whites-only diner because more than an education, she wants to be white.

Unfortunately, instead of exploring this issue and dealing with what would eventually become the core of the Civil Rights movement and with issues still at play today, Imitation of Life decides that a good portion of the second half of the film should be devoted to Bea’s romantic life and her relationship with ichthyologist Stephen Archer (Warren William). More specifically, what happens is that Jessie returns from college, meets Stephen, and falls for him despite him being a couple of decades her senior and despite him being romantically involved with her mother. Why does this happen? Because Bea decides that the best course of action is to not tell Jessie that she and Stephen are engaged.

Like I said at the top, Imitation of Life is a frustrating film. The most interesting story here is the relationship between Peola and her mother and between Peola and her racial heritage. Sure, we get back to this eventually, but far too much time is spent in the uninteresting romantic entanglements of Bea, Stephen, and Jessie. Whether this is because the subject was too daring for the time, too taboo, or just not realized as being interesting isn’t the point. What is the point is that all of the handling of race in the film is ultimately racist. The answer to Peola’s problems we learn eventually is that she needs to learn her place in society, and that wanting more than her heritage would allow in 1934 America is wrong and bad.

And yet, Imitation of Life is remarkably forward-looking in some respects. Delilah, despite her simplicity, backward grammar, and lack of education, is a real character in this rather than just being “the help.” It might be the first, and is certainly one of the first instances of a black character having as much importance in the narrative as the white characters and of having her problems and concerns treated as seriously as those of other characters. We’re meant to see Delilah not as Bea’s servant, but as Bea’s friend and in many ways as her equal, even if they really aren’t equal. The idea that Bea would give her a stake in the company—and that despite Delilah’s objections Bea banks Delilah’s share of the profits for her—is rather remarkable in 1934.

Racial progress moves in mysterious fits and starts. I have no doubt that Imitation of Life would have been regarded as extremely progressive in 1934 just as it looks terribly backward by modern standards. Louise Beavers, despite getting fourth billing, is clearly the equal of Claudette Colbert in terms of how the story works. And yet for all this, she still plays a servant and still speaks in the regressive “Stepin Fetchit” style common to the era. It’s still the truth that Louise Beavers wasn’t nominated for an Oscar here despite giving a hell of a performance in what today would be a thankless role (and Grace Moore did earn one for the soapy and syrupy One Night of Love), and wouldn’t have been nominated for Supporting Actress had the category been invented.

Ultimately, this isn’t a terrible movie viewed from the perspective of its time, but it’s a painful watch based on modern sensibilities.

Why to watch Imitation of Life (1934): If Louise Beavers was alive today, she’d be Kathy Bates.
Why not to watch: It glosses over the most interesting aspect of the story.