Films: Inn of the Sixth Happiness
Format: Streaming video from NetFlix on The Nook. 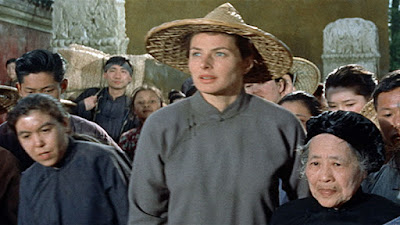 When a film is based on a real story or on real people, there is always a chance that the truth has been embellished in some way to make the filmed version more exciting or more cinematic. With some stories, this really isn’t necessary. With The Inn of the Sixth Happiness, only a few surface embellishments are made because the real story is pretty astonishing. The film tells the story of several years in the life of Gladys Aylward (Ingrid Bergman), who went from being an English domestic servant to a national hero of China.

As the film begins, Aylward has applied to become a missionary to China, but is rejected because of her lack of education. Taking pity on her since she left a job during a time when jobs are scarce, the senior missionary (Moultrie Kelsall) instead arranges for her to get a job as a maid at the home of a well-known explorer with contacts in China (Ronald Squire). Using virtually all of her earnings, Aylward purchases a ticket for herself on the Trans-Siberian railway in installments, eventually making enough to pay off the ticket and head to China. Her employer sets her up with a contact in China and off she goes.

Her contact is an elderly British woman named Jeannie Lawson (Athene Seyler) who is attempting to open up an inn for passers-by, mule trains, and travelers. Like all inns, the one she wants to open will provide insect-free bedding and meals, but will also provide the travelers with stories. Since this is a mission, of course the stories are going to be about Christianity in the hopes of possibly converting a few of the heathen. Eventually they open the inn, calling it the Inn of the Sixth Happiness. Chines proverbs evidently only list five happinesses—the sixth one in this case is presumably eternal life.

Anyway, all goes well until Jeannie takes a bad fall from a roof and dies of her injuries. The inn has no credit without her and no way to stay open. Due to the influence of local military official Lin Nan (Curd Jurgens), the local ruler, the Mandarin of Yang Cheng (Robert Donat in his final movie role) offers Gladys a new position. The Chinese government is attempting to put an end to ancient practices like foot binding, and suddenly Gladys is the person in charge of making sure that foot binding stops in the area. She is given the name Jan-Ai and eventually becomes a Chinese citizen. Her work in helping the working and living conditions of the local populace, including that of the nearby prison, earn her great respect with the people of the province, and suddenly she is a woman of great importance and much beloved.

The problem is that all of this takes place in the 1930s, which means that before too long we’ll be dealing with the invasion of the Japanese into China and all that that entails. There is something like a budding romance between Jan-Ai and Lin Nan, and while it’s requited, the circumstances of the Japanese invasion and her work serve to keep them mainly apart. When the Japanese approach, Jan-Ai is tasked with the responsibility of herding a group of 100 orphaned children over the mountains to safety, which takes up the third act of the film. Most of this is accurate to the real story of Gladys Aylward. In truth, there was a romance in her life with a soldier, but likely not a military commander, and the name she was given by the locals was a little different. But the real Gladys Aylward really did shepherd 100 children over mountains through occupied territory to safety. Like I said at the top, not a great deal of embellishment was needed here.

There’s a great deal to appreciate with this film. Not the least of this is the gorgeous scenery, which was evidently Wales standing in for China and shot with local Chinese extras. For a film that runs a bit longer than 150 minutes, it really does move by at a pretty good clip. I don’t think the film is too long, but it does take too long to get to the third and most interesting act. There’s a lot of set-up here that doesn’t feel necessary and when we do get to the third act, it feels almost as if it gets short shrift. There’s a lot of potential in herding a group of kids across mountains patrolled by the enemy, and the 25-30 minutes we spend there don’t feel like they’re enough.

Ingrid Bergman, of course, is great, as she generally was. Her natural accent does seem out of place for a woman who was born in London, but it’s difficult to otherwise fault her performance. Bergman is easy to like and she manages to play the role without much melodrama, despite this being certainly a good candidate for it. She plays the role seriously and treats Gladys Aylward like a woman of substance—there’s no glamor in the role and she doesn’t try for it. As a result, she comes across as honest, and it works.

Better, The Inn of the Sixth Happiness has every opportunity to preach to its audience and doesn’t. The religious messages are kept few and far between. While religion is certainly what brings Gladys Aylward to China, this motivation doesn’t make itself manifest through much of the film. Her concerns are far more humanitarian that spiritual, and I appreciate that a great deal.

The biggest issue I have with The Inn of the Sixth Happiness is what I mentioned above—it doesn’t spend long enough on what is by far the most interesting and exciting part of the story. We could easily lose the romance (although that’s a product of its time) and spend longer on the journey, which is really what we want to see. Well, that and the whitewashing of the two most prominent Chinese roles are really the only major issues I have.

Why to watch Inn of the Sixth Happiness: It’s a hell of a story.
Why not to watch: It takes us a long time to get to the third act.