Film: My Week with Marilyn
Format: Streaming video from Hoopla Digital on The Nook. 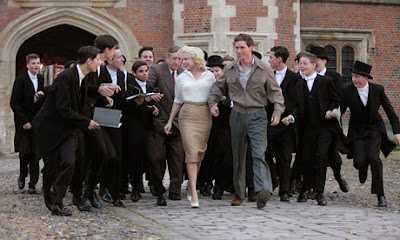 I can imagine that for Michelle Williams, stepping literally into the shoes of Marilyn Monroe was a daunting idea. Monroe still has an iconic cachet, the sort that is enjoyed by anyone who was that staggeringly famous and who died that tragically young. It’s the same worship afforded people like Jimi Hendrix and James Dean, but for Marilyn, it always seems like a much bigger stage, more like Elvis. Being Marilyn had to be a bit scary, especially as the title character of My Week with Marilyn. Maybe it was a little easier since, while the film is very much about her, it’s just as much about Colin Clark.

So who the hell is Colin Clark (Eddie Redmayne)? Eventually, he was a director and writer, and My Week with Marilyn is based on his memoir of the creation of the film The Prince and the Showgirl. As the film starts, Colin has graduated from college and has decided to attempt a career in the movie business, much to the consternation of his family. He once met Laurence Olivier (Kenneth Branagh), so he shows up at Olivier’s studios and asks for a job. When one isn’t forthcoming, he waits until he is hired as a third assistant director, which is an uncredited position and little more than a not-even-glorified gofer.

The Prince and the Showgirl is going to be directed by Olivier, and he is convinced that Marilyn Monroe is exactly who he needs opposite him. Marilyn has just married playwright Arthur Miller (Dougray Scott) and eventually shows up with both Miller and her acting coach Paula Strasberg (Zoe Wanamaker) in tow. Things are difficult from the outset, since Olivier is unenthusiastic about method acting and Marilyn is a complete devotee. The two clash, with Marilyn unable to give the sort of performance that is needed because she can’t seem to latch onto the part. Truthfully, most of the cast, especially Sybil Thorndike (Judi Dench) are in awe of her. During these first few days, tempers run high and Colin finds himself attracted to Lucy (Emma Watson), who works in wardrobe.

But, of course, Marilyn Monroe is erratic and filled with self-doubt and confidence issues. When she discovers her husband has been working on a character that seems to have more than a little surface similarity to her, she breaks down completely and Miller retreats to New York. And this is where things get interesting—for whatever reason and despite the best efforts of Marilyn’s business partner Milton H. Greene (Dominic Cooper), Colin becomes the touchstone for Marilyn to stay grounded. As the film’s gofer, he comes into frequent contact with her, and she begins to trust him. For his part, Colin can’t help but fall for the woman who was considered the most beautiful and desirable in the world paying him a great deal of attention.

The cast of My Week with Marilyn is stellar. It’s one of those casts to die for, where even characters that have just a scene or two are filled with actors like Toby Jones, Derek Jacobi and the still-radiant Julia Ormond. The great Judi Dench only has a couple of scenes and she’s Judi Goddam Dench.

The two stand-out performances here are the two that were nominated for Oscars. I tend to like Kenneth Branagh wherever and whenever I see him. He does pretty much everything in front of the camera well, doing tremendous Shakespeare adaptations, solid dramas, a thriller or two, and a bit of comedy. As Olivier, he plays a man who simply wants to make a movie—to act and to direct—and who finds himself in a position where all he wants is continually frustrated by the foibles of the person he has cast across from himself. Michelle Williams had the unenviable task of making a true Hollywood icon into something human. She needed to play Marilyn Monroe as a real person with real problems, and the temptation to make her a caricature or a melodramatic heroine would have been easy to slip into. She walks a fine line, playing both the public persona and the private one differently, but still distinctly the same character.

I’m less sure of Eddie Redmayne here. Redmayne has proven that he’s got solid acting chops, and this film may be what got him the roles that have won him so much acclaim, but his main job here was evidently to look frequently goggle-eyed that Marilyn Monroe is actually talking to him and paying him any attention. It’s not a bad performance, but I found that when there are other actors on screen, I tended to watch them instead of what came across as a deer-in-headlights performance in many instances.

My Week with Marilyn is good, but I’m not convinced it’s great despite the cast and a couple of very good performances. With a lesser cast and no changes to the screenplay, this feels a step away from a movie of the week, and not an entirely full step. It’s a unique portrait of a person who still casts a huge shadow on pop culture, but I remain unconvinced that it’s anything revolutionary or anything more than merely good.

Why to watch My Week with Marilyn: A well-done sort-of biography of one of the most iconic people of the last 100 years.
Why not to watch: It’s a step away from feeling like it was made for television.