Off Script: Tombs of the Blind Dead 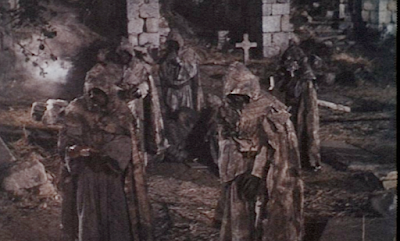 Two of my favorite movies are Spanish horror movies. The Devil’s Backbone is one of my top-5 movies of all time and The Orphanage is probably in my top-10, although I’ve never made a formal top-10 list. I entered Tombs of the Blind Dead (sometimes called just Tomb of the Blind Dead, just The Blind Dead, or its Spanish title La Noche del Terror Ciego) with some expectations. This is apparently one of the movies that starts a renaissance in Spanish horror films and spawned a trio of follow-up films. Evidently people just can’t get enough of vampire/mummy Templars.

While we start with what appears to be a medieval ceremony involving the torture and death of a young woman, we spend the bulk of the beginning of the film in the present. Gina (Maria Elena Arpon, listed as Helen Harp) and her boyfriend Roger (Cesar Burner) are planning a camping trip when Gina bumps into Betty Turner (Lone Fleming), a friend from school. Betty is quickly invited along on the trip, and while it’s not stated, I think it’s pretty clear that Roger is hoping for a little doubling-up on him under the stars. That is made more manifest when he and Betty flirt on the train. Gina gets so upset that she asks for the train to stop to let her off. When the train doesn’t stop, she jumps off right around an old abandoned monastery.

As it happens, that monastery belonged to a group of Knights Templar who were convicted of Satanism, hanged, and left to rot so the crows would peck out their eyes. Because she evidently has never seen a horror movie and doesn’t know how these things work, Gina camps out for the night in the middle of the ruined monastery. Lo and behold, the dead Templars rise from their graves and pursue her, eventually tracking her down, attacking her, and draining her blood.

When it turns out that Gina hasn’t returned home, Betty and Roger head out to the monastery only to encounter the police, who have located Gina’s body. The pair then locate a professor named Candal (Francisco Sanz), who seems to know a great deal about the Templars. In fact, based on almost no information he determines that Gina wasn’t murdered by modern cultists but by resurrected Templars. He also seems to know immediately that because their eyes were pecked out they are blind, but will track their victims by sound. Oh, and he knows that they will drain their victims of blood.

We also find out that there have been a number of bodies located at the ruined monastery, which doesn’t explain why Gina suddenly reanimates and kills the morgue attendant. It also doesn’t explain why she wanders off and attacks Betty’s secretary Nina (Veronica Llimera), or why she is finally killed when she bursts into flame. In fact, this entire middle section of the film seems to be completely without a point. We do discover that the professor has a son named Pedro (Jose Thelman) who is running contraband between Spain and Portugal, and that the police suspect him of being involved in Gina’s murder to keep people away from the ruins and foster superstitions.

So what are Roger and Betty to do? Well, contact Pedro and his girlfriend Maria (Maria Silva) to go camp out in the ruins at night to see exactly what is happening. What follows happens with pretty predictable results…for the most part. The Templars rise up and kill Pedro, then chase after Roger while the two women are hiding in a locked room. Maria inexplicably won’t let Roger in, and there’s a bit of a catfight over this. Lots of death ensues. Betty runs away. Templars chase. And the film ends without much in the way of resolution (hence the sequels, I presume).

All of this brings up the significant problems with Tombs of the Blind Dead. Everyone in the film is either completely stupid or brilliant to the point of immediately jumping to the correct conclusion based on almost no evidence. Every single one of the victims here earned being a victim by essentially walking blindly into danger, almost willingly sacrificing themselves to the Templars. When they are specifically told not to make noise because the undead track by sound, they respond by screaming “No! No!” at the top of their lungs. Frankly, the Templars are acting as chlorine in the gene pool in moments like this.

There are too many unanswered questions here. If there has been a string of bodies from the monastery, why is Gina the one that reanimates? And if the others have reanimated, why doesn’t anyone seem to be aware that Gina will? The ending puts forth about a half dozen plot holes and resolves none of them—some of these are reminiscent of the abandoned boat that miraculously reaches safe harbor in the second Jurassic Park movie. What the hell—time for a spoiler.

At the end, Gina is running for the train, which stops to pick her up. She falls down a hill and one of the engineers jumps off the train to rescue her and literally drags her to the train. My thinking was that perhaps she broke her ankle or something and was unable to walk. However, at the very end, when the train has somehow started up again and somehow comes to a stop in the station, Gina climbs down off the train and walks away. Why the hell was the dude dragging her? If she was so paralyzed with fear, either pick her ass up or leave her. That’s nature’s way of saying that she shouldn’t be allowed to reproduce.

Really, the high point here are the monsters. The Templars move zombie-like, but they’re a lot closer to skeletal mummies that act as vampires. They’re pretty cool. The rest of this boggles the mind, though. I guess it’s worth seeing for the Templar mummy-vampires, but really, there’s not enough here to justify why this is so many people think so highly of this.

Why to watch Tombs of the Blind Dead: Undead Templar vampire/mummies! What more could you want?
Why not to watch: So many plot holes.

Posted by SJHoneywell at 9:16 PM