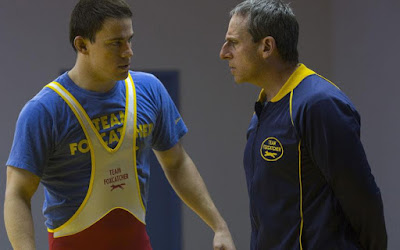 I find sport movies hit or miss. There was a time when I was into sports. I could talk football and basketball with a decent amount of knowledge and knew something about baseball, too. That time has passed and it’s no longer something that I give any time to on a daily, weekly, or monthly basis. A film like Foxcatcher, then, needs to be interesting beyond the sport for me to care much about it. I’ve never had an interest in wrestling, either the showy, entertainment-based professional sort or the Olympic style. The only hope this film has is to be compelling beyond what happens on the mat.

I vaguely remember the news story when it happened. I don’t remember every part of it—it was one of those oddball tragedies that crop up now and again in the news. Terrible events happen all of the time, of course, but sometimes one aspect of the story is so strange that it becomes a thing for a couple of days, like the astronaut who attempted to kill the woman who was having an affair with the man with whom she had been having an affair. The female astronaut driving around in a space diaper was a brief media sensation and then something that disappeared. The events concerning the characters in Foxcatcher was like that. I remember something happening, but not the details.

More than anything, this is the story of John E. du Pont (Steve Carell), scion of the du Pont family and one of the richest men in America. As a member of the idle rich, du Pont spent his time as an ornithologist and philanthropist and was also keenly interested in the sport of wrestling. His wealth gave him the ability to set up his own training facility and to attract the notice of a number of talented wrestlers. This number includes Mark Schultz (Channing Tatum), who at the time of the film’s opening had won an Olympic gold medal in Los Angeles and was training for the World Championship in 1987.

John convinces Mark to come train at Foxcatcher farms with the intent of becoming the new home of American wrestling. To entice him, Mark is given a salary and a house to live in, essentially everything he needs to train himself into peak condition. A part of the agreement is for Mark to attempt to convince his brother Dave (Mark Ruffalo), also a gold medalist in wrestling, to come to Foxcatcher as well. Eventually, du Pont makes a good enough offer to bring in Dave to help train the rest of the team, but by this point, the division between John and Mark has started.

What makes Foxcatcher so interesting to me is that for it being a movie about wrestling, it has a great deal in common with many horror movies. There are certainly horror elements at play here, and the film doesn’t hide this fact. Most of this comes from du Pont himself. Carell plays him as a man who is nearly detached from the world around him in the sense of his own worth and importance. He is naturally important in that he is funding the various wrestlers training at Foxcatcher, but he is also someone with almost no experience in wrestling itself. He wants to consider himself the coach, but he doesn’t have the background or experience to really teach the team anything. He is, more or less, spending a great deal of money to essentially live out a very specific fantasy.

Carell’s performance touches on horror tropes, though, because that desire to live out the fantasy is so intense. He is a disturbing presence throughout the film. He talks in a way to inflate his own importance and to demand a level of respect that comes from his money but that he wants to come from something or somewhere else. In his mind, though, that reality is the truth, even if it clearly isn’t the truth that everyone else sees. As the film continues, he slowly descends into madness, and the last part of the film is more or less an exercise in seeing just how much further he might descend and where that descent will take him.

While the cast all around is good, the three actors mentioned above are virtually the entire thing—it’s a sort of platonic love triangle with a few other people poking around the edges. Both Carell and Ruffalo were Oscar-nominated, which makes Channing Tatum the unsung hero of the film. He gives a good performance, one that shows Mark Schultz as passionate and intense, but also confused and torn apart by events around him. Unfortunately, his part was probably too big for a supporting nomination and both he and his character are overshadowed by Carell’s depictions of John du Pont’s crippling idiosyncrasies.

If there is a fault here, it’s that Foxcatcher may run a touch too long. Director Bennett Miller allows the tension of the situation to build slowly, and perhaps a bit too slowly for its ultimate effect. A couple of trims to get this down to a two-hour running time (it clocks in at about 2:14) would keep most of the tension without feeling like the build is too slow.

Still, it’s an impressive piece of work. Joss Whedon mentions in the commentary track of Serenity that he likes casting comic actors (he was referring in this case to Michael Hitchcock) in serious roles because comedy is so much more difficult than drama and they always do it well. Miller apparently concurred, casting Carell when he came to the realization that all comics have a streak of darkness within them. He was right. For all the good work of Ruffalo and Tatum, this is Carell’s film, prosthetic nose and all.

Why to watch Foxcatcher: A study in slow madness and obsession.
Why not to watch: Sports make people crazy.