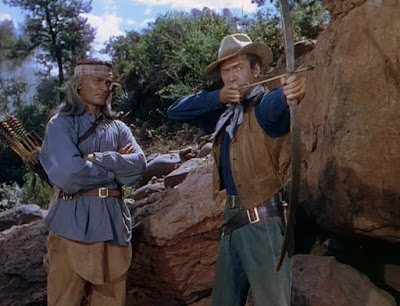 I always forget that James Stewart was a legitimate Western star. He did enough of them, and enough of them were pretty good that I probably shouldn’t forget that so easily. Westerns are a big genre, of course, and there are enough of them that anyone can find a few that fit with their other film sensibilities. That said, Westerns have trouble getting the natives right. Early films painted them (often literally painting white actors) as savages who only existed to be threatening and get shot. Many a later Western (see Dances with Wolves, for instance) paint them as noble savages who were callously abused and slaughtered. The truth, as with many things, probably lies somewhere in between. Broken Arrow is interesting in that regard, because that’s the course it tries to set for itself.

Tom Jeffords (James Stewart) is out panning for gold in Apache territory when he discovers a young boy who has been wounded. Tom nurses him back to health, and after a few days, the boy is healthy enough to return to his home. At this time, Tom and the boy are set upon by Apache, but Tom is spared because of his kindness and because he did not take part in the attack that wounded the boy in the first place.

But, and this is where things become very interesting, as the Apache are letting Tom go, a group of prospectors enter the area. Tom is tied to a tree and the prospectors are attacked. Once they have been run off, Tom is released and sent back to Tucson. His recent experiences have taught him a little about the Apache, and despite the misgivings of local hard case Ben Slade (Will Geer), Tom thinks he might be able to improve conditions. The big problem in Tucson is that none of the mail is getting through. Tom decides that if he can learn the Apache language and customs, he might be able to broker at least a partial truce.

After a month of study, Tom heads out into Apache country more or less under a flag of truce, searching for Cochise (Jeff Chandler). The two meet, and while things are tense at first, they eventually come to an agreement and a sort of mutual trust. Cochise agrees that his people will no longer attack the mail carriers once he is assured that the mail does not carry military commands. He says nothing of a more general truce. Despite the locals’ misgivings and mistrust, the mail starts going through.

The other important moment that happens here is that Tom meets a young woman in Cochise’s camp. The girl, Sonseeahray (Debra Paget), shows interest in Tom, and that interest is clearly mutual. This starts a slow and tentative romance that, despite their clear age difference (Stewart was a good 2 ½ times Paget’s age), is actually sort of sweet.

Of course, things are going to go south at some point, and in the case of Broken Arrow there is guilt on both sides. Ben Slade and the others like him are itching to attack the Apache and wipe them out. While Cochise and most of his people are happy to attempt a more general truce, there is a group who disagree. This group, led by Geronimo (Jay Silverheels), does not attack the mail carriers, but shows no such restraint on anyone else entering into their territory.

So let’s talk about what Broken Arrow gets right, because it’s pretty significant. Broken Arrow treats the Native Americans not as violent sub-humans or as idealized noble people at touch with everything in the natural world. It treats them like real people who have their own ideas and who aren’t some sort of block of identical people who all think and feel the same way about everything. They have differences and disagree with each other. Some of them are honorable and decent. Some of them aren’t. In short, it treats them the same way it treats the white characters in the narrative. It goes so far as to have Tom Jeffords learn the Apache language so that conversations take place in a way that doesn’t make Cochise and the others sound remedial. Sure, they’re talking in English on the screen, but within the narrative, they’re speaking as equals. That’s important.

The problem is the obvious one: whitewashing. Jeff Chandler and Debra Paget are as white as I am. Chandler is so white that he was evidently the template for Race Bannon on Johnny Quest. That said, it’s nice to see Jay Silverheels in a solid and important role. In fact, most of the native roles were played by actual Apache from a nearby reservation. In that respect, once again we have to give Broken Arrow credit.

The movie doesn’t really have much of a resolution, though, which is something of an issue. Still, there’s a great deal to like here. The story may be small, but the way it gets there is big.

Why to watch Broken Arrow: It treats Native Americans like real people.
Why not to watch: Nothing really gets resolved.

Posted by SJHoneywell at 7:45 PM