Because an Eggplant Would Be Weird 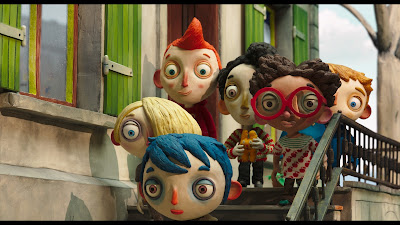 I’m happy to complain about Oscar’s nominating habits all the time, but there are moments when they do it right. A film like My Life a Zucchini (Ma Vie de Courgette in its original French) is a Swiss-French stop-motion collaboration that would be virtually unheard of and completely unknown without its nomination. The truth is that a film like this has very little chance of actually winning Best Animated Feature. Even with screeners being sent out to voters, it simply doesn’t have the cachet of a film from the bigger studios. And yet, this is precisely the sort of film that should be nominated to give it greater exposure.

My Life as a Zucchini features stop-motion animation with a particular look unlike anything I’ve seen. The characters are clearly human, but somehow off. Their arms are far too long, for instance. Everyone’s eyes are rimmed with a color that matches his or her hair and everyone’s nose is a shade of red. Because of this, in many ways My Life as a Zucchini is the least attractive of the five nominees, and that is a part of how I judge films in this category.

I watched the English-language version of this film, which means I’ll be using the English-speaking cast for what follows. Nine-year-old Icare (Erick Abbate) lives with his alcoholic mother, who has been abandoned by her husband. Icare, who she calls “Zucchini,” is more or less left to fend for himself in his attic room. One day, he creates a pyramid of her empty beer cans, but the structure collapses when he attempts to put the top one in place. This creates a mess, and as his drunk mother marches up the stairs to punish him, Zucchini slams the trap door down on her. She falls down the stairs, killing her. And like that, Zucchini is placed in an orphanage.

This orphanage is run by Madame Papineau (Susanne Blakeslee), who is assisted by Rosy (Ellen Page). The children are taught by Mr. Paul (Will Forte), who happens to be Rosy’s boyfriend. Zucchini is initially withdrawn and becomes, for a day or two, the target of Simon (Romy Beckman). Eventually, the two bond when Simon tells Zucchini why the other children, Ahmed (Barry Mitchell), Alice (Clara Young), Georgie (Finn Robbins), and Bea (Olivia Bucknor) are at the orphanage. Zucchini begins to enjoy his time there, but he also looks forward to the visits from Raymond (Nick Offerman), the cop who took him to the orphanage in the first place.

Eventually, a new child arrives. Camille (Ness Krell) is a year older than Zucchini and he is immediately smitten with her and her ability to stand up to Simon, who, while a bit of a bully, is still something of a paper tiger and not even really unpleasant. Camille’s story is that she saw her father kill her mother and then himself. Her aunt Ida (Amy Sedaris) wants to adopt her. While Ida puts up a good front, she’s actually abusive and wants Camille only for the money it will bring her. Thus, it’s up to the kids to figure out some way to get her to stay at the orphanage with them, since things are better with her there.

What My Life as a Zucchini does well is not play this for kids. It’s an animated movie, and there’s nothing like nudity or language in it, but it clearly touches on a number of adult themes. The film is rated PG-13, and I think that’s actually appropriate. Younger kids would understand most of it, but it might raise some unpleasant or uncomfortable conversations following the movie.

There’s a lot to like here. The characters come across as real. These aren’t uncomfortably happy children in bad situations. All of these kids are dealing with tragedies in their own lives—parents in jail, deported, dead. These are kids who have been abandoned and who are traumatized by it, and dealing with that trauma in a number of different, not always healthy ways. For decades, Disney has taught us that orphans have mean step-parents but are special. These kids are tragic, and deal with what has been thrown at them as best they can, which isn’t always that good or that healthy for them.

It’s also remarkably efficient. From start to the beginning of the credits, My Life as a Zucchini is a touch over an hour. There is a mid-credits sequence of the character of Zucchini as a young child being interviewed as an actor, a sort of outtake like those that pop up in Pixar movies. The truth is that the film doesn’t need more than an hour to tell the story it wants to. More impressively, it manages to give us real personalities of several of the characters in this short time.

I enjoyed the hell out of this. It’s sweet almost in spite of itself, or somehow manages to be sweet and uplifting despite the experiences of the characters. I genuinely liked these kids and wanted them to be okay. Even Simon turns out to be not a creep or a bully, but just a kid trying to figure out how to interact with a world that has beaten him down.

These are the kinds of movies that Oscar should nominate.

Why to watch My Life as a Zucchini: A realistic depiction of trouble kids and an ending it really earns.
Why not to watch: The look of the film is offputting.