Queen of the Jungle

Films: Gorillas in the Mist
Format: DVD from personal collection on laptop. 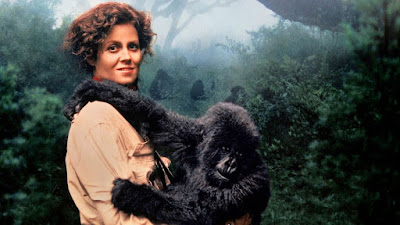 Gorillas in the Mist has been sitting on my shelf for literally years. I knew I was going to have to watch it eventually, but I didn’t really want to because I know how the story ends, and I knew the end was going to piss me off on some level. That’s kind of the problem when you’re dealing with a story based on real events. If you know the real events and they don’t end in the way you’d like them to, you know you’re setting yourself up for a frustrating finish.

Dian Fossey (Sigourney Weaver) was a physical therapist who, inspired by the work of Louis Leakey (Iain Cuthbertson) decides to chuck it all and work in the Congo helping to create a census of mountain gorillas. This is a problem for several reasons. First, she has no experience, and Leakey tries to fend her off because she has no real science training. She eventually wears him down, though, and is soon on her way to the Congo. The second problem is that there is a Congolese civil war, which makes the place incredibly dangerous, and a white woman in the middle of the jungle is going to raise some eyebrows. Third, the mountain gorillas are rapidly going extinct because of poaching. Fourth, and in many ways most critically, the poachers aren’t about to let some wannabee scientist end their income stream.

Things are rocky at first, but eventually, Fossey settles in with her guide Sembagare (John Omirah Miluwi). Just as they begin successfully tracking a gorilla group, her base camp is destroyed by Congolese troops and she is kicked out of the country. She winds up in neighboring Rwanda at the home of Roz Carr (Julie Harris). Here, she realizes that the habitat of the gorillas crosses between the border of the two countries and she can do her work from Rwanda. Re-energized, she heads back to the mountains with Sembagare and sets up a new base camp.

What follows includes several important events. First is constant clashes with Claude Van Veeten (Constantin Alexandrov), a man who hires poachers and similar people to trap animals for him so that he can sell them to zoos. Second is that she slowly makes herself a fixture in a gorilla clan headed by a silverback she dubs “Digit” because two fingers on his hands are webbed. Over time, she is more or less accepted by the gorillas, and she begins to document their behavior, forwarding all of her work to Leakey in the hopes that it might shed some light on the very earliest human behavior.

Fossey’s work is funded by National Geographic, and eventually they decide to make her something like a poster child for the gorillas, sending photographer/videographer Bob Campbell to take pictures of her and the gorillas. The two have a fairly torrid affair despite her engagement to a man back in the States and his marriage. Campbell eventually asks for a divorce from his wife with intentions of marrying Fossey, but the relationship breaks apart when she refuses to leave the mountain and her gorillas.

The end of Gorillas in the Mist is frustrating and yet strangely uplifting. A little research will lead you to what happened to Dian Fossey and what has happened with the population of mountain gorillas in the world. It’s bittersweet.

The truth is that it’s difficult not to be a little bit in awe of Dian Fossey, someone who uprooted her entire world and flew halfway across the planet for something she felt passionately about. The movie is smart enough not to make this hagiography. Fossey is clearly fighting the good fight here, but there are many moments where her temper (often with righteous indignation) is on full display.

The real truth is, though, that I can’t say enough about Sigourney Weaver. I love me some Sigourney Weaver, and I think she’s been unfairly robbed of at least one Oscar in her career, and she hasn’t been nominated for anything since the late 1980s. She approaches this role not unlike the way that Fossey approached her dealings with those threatening her gorillas and their habitat. She is fierce and passionate, and not about to let anyone or anything come between her and doing what she knows is right.

Gorillas in the Mist is an impressive film for a number of reasons. It is in part travelogue, with some truly impressive scenery and a great deal of time spent in jungle canopy. It’s equally impressive in terms of the creature effects. The gorillas here are often people in costumes, and while they aren’t entirely perfect, they’re pretty damn close, and it’s not easy to see the difference between actual footage and the work of Rick Baker. Even if the movie were terrible, it would be worth seeing for the gorilla costuming alone.

This is an infuriating film in so many ways. Fortunately for the film, it is not infuriating by being poorly made, acted, or directed. It’s an important film because of what it represents and who it represents. But be prepared to be incensed, because there is a great deal here that happens that is in no manner good.

Why to watch Gorillas in the Mist: Dian Fossey was hardcore.
Why not to watch: Poaching.