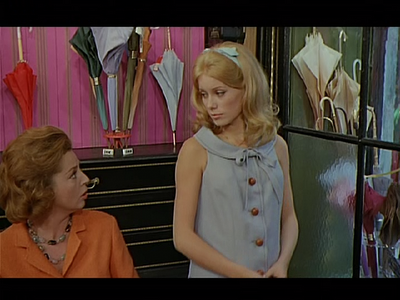 1964 is a surprisingly strong year for Best Actress films, and a much stronger year than the nominations would suggest. There are a few where I’m genuinely surprised at the lack of nomination. I wouldn’t personally nominate Audrey Hepburn for My Fair Lady, but I’m a little surprised the Academy didn’t. With Barbara Barrie in One Potato, Two Potato, I’m in the opposite situation; I think she’s more worthy of a nomination, but the Academy may have been put off by the notion of an interracial romance in 1964 (and admittedly, Barrie is stiff in a few spots). Kind of unnominatable (is that a word?) are Joan Crawford in Strait-Jacket--she’s clearly better than the material—and Bette Davis in Hush…Hush, Sweet Charlotte. I’d love to have seen a nomination for Constance Towers for The Naked Kiss but it’s far too lurid for Oscar material. Since she was nominated (and won) for Mary Poppins, nominating Julie Andrews for The Americanization of Emily would be redundant (and I haven’t seen it, so I’m basing this on reputation). On the foreign front, we had Monica Vitta in The Red Desert, Catherine Deneuve in The Umbrellas of Cherbourg, and Kyoko Kishida in Woman in the Dunes. Of these, Woman in the Dunes got its nominations in 1965, so I can give that a pass here for that reason.

5. I like Debbie Reynolds, and I have heard that Molly Brown was her favorite role, but I hated this movie a lot. More to the point, I hated her self-aggrandizing, screechy performance for the entire running time of the film. When Debbie Reynolds was good, there were few people who could match her in terms of being a consummate entertainer. Sadly, in The Unsinkable Molly Brown, she is almost a caricature of that, playing to the back rows of the theater with every belted line and every corny comment. There are so many better options to put here, and she didn’t deserve to be here at all.

4. Fourth place is a little harder for me to figure. I like Anne Bancroft, but The Pumpkin Eater was not a fun film to watch. I respect it, and Bancroft is good in the role, but I found the film unpleasant in a lot of respects. Honestly, it’s a film that makes me feel dumb in a lot of ways because I think it can be simultaneously read as pro- and anti-feminist, and while Bancroft is very good, her performance doesn’t help me figure it out. I’m probably punishing her for the film more than for the performance, but that does happen sometimes.

3. Were I voting in 1964 (quite a feat since I hadn’t been born yet), I might well vote Sophia Loren higher than third place. The problem is that, while I liked Marriage, Italian-Style pretty well, I also know that Divorce, Italian-Style was yet to come, and it’s a better movie in just about every respect. Loren’s performance is a good one, but it’s also riding a very close edge to being an almost complete stereotype of an Italian woman. That’s not Loren’s fault, or at least not entirely her fault, but it’s certainly at least partly her fault, and so she’s not moving above third place.

2. It seems that almost everyone likes Mary Poppins more than I do. I probably would have liked it a lot more in 1964 than I do now. I don’t think the film has aged very well for starters. I have a hard time believing that it would charm or entertain modern kids in general. That said, Julie Andrews plays the role beautifully. It’s one of those films where it’s pretty much impossible to imagine anyone else in the role. It’s a little angering to put a role I don’t really like in a movie I don’t really like this high, but I fully understand why Andrews won.

1. My vote goes to Kim Stanley in Séance on a Wet Afternoon, though, and it’s for a very specific reason. This is an unforgiving role, one that is highly unpleasant in almost every aspect. Stanley is playing a character who is terribly evil in so many ways and must do so while simultaneously playing a character who sees herself as a paragon of virtue and who becomes over the course of the film entirely delusional. Kim Stanley didn’t do enough film work, and this film serves as exhibit A in that opinion. It’s just about perfect and just about perfect to make the film it is in work the way it should. She’s my winner.

Posted by SJHoneywell at 1:17 PM