Film: The Miracle Worker
Format: DVD from NetFlix on laptop. 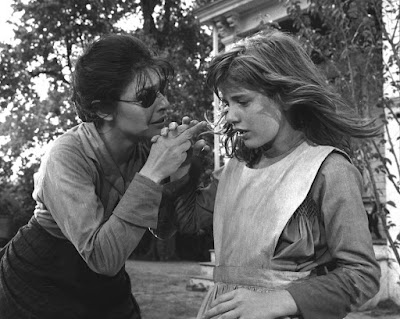 I was under the impression that The Miracle Worker was sort of a biography of Helen Keller, or at least something like a memoir. It’s not. It’s actually a memoir of her teacher, Anne Sullivan. I won’t go into a big screed here about who Helen Keller was. You already know, I’m certain. She was stricken with scarlet fever as an infant and lost both her sight and hearing and eventually learned to communicate thanks to the tireless effort of the aforementioned Anne Sullivan.

The Miracle Worker is based on a stage play. Originally, the plan was for a much bigger name to take the Anne Sullivan role. Director Arthur Penn stuck to wanting Anne Bancroft, who had played the role on stage with Patty Duke playing Helen Keller. Because he insisted on this, the studio cut his budget from $2 million to a half million, and Penn still managed to direct his two lead actresses to Oscar-winning performances.

So, you’ve already got the basics on Helen Keller. We see a little of her life before the arrival of Anne Sullivan. Without sight or hearing, there isn’t really a way for anyone to communicate with her, which means that Helen is essentially feral. Her mother (Inga Swenson) is lenient with her non-communicative daughter, while the constant distractions bother her husband (Victor Jory). Pushed to their breaking point, the Kellers send to the Perkins School for the Blind for a teacher, which is where Anne Sullivan comes from. Sullivan is not a teacher, though, but a former student who has had a number of operations on her eyes and can see slightly, but wears dark glasses because anything above faint light hurts her eyes.

Things do not go well initially. Her first meeting with Helen has moments of peace and almost connection, but also includes Helen beating her, knocking out a tooth, and locking her in her bedroom. Subsequent meetings also don’t go very well. Hele, used to being able to do what she wants when she wants to, reacts badly to a stranger trying to get her to behave. The Kellers, particularly Captain Keller and older brother James (Andrew Prine) aren’t happy with what Anne is doing with Helen. There’s also the additional tension that this is a decade or two after the American Civil War and the Kellers live in Alabama while Anne Sullivan has come from Boston.

While Captain Keller wants Anne to leave, she offers a bargain. Give her Helen on her own for two weeks so that Helen will come to depend on her for everything. If there is no progress after two weeks, the experiment will end. Anne works constantly, attempting to teach Helen how to spell words through sign language (Helen feels her hands and attempts to replicate the letters with her own) and connect those signs to objects like her favorite doll and to food. The progress is slow and Helen fights constantly, wanting to essentially return to her easier, feral state.

It’s really all about the performances here. The dinner scene in the middle of the film is, for lack of a better way to put it, the money shot. Helen disrupts the family meal by walking around the table, grabbing food off everyone’s plate and eating it, since this has become the only way she knows how to eat. Anne, wanting her to learn some basic table manners, kicks everyone out of the room and tries to force Helen to eat with a spoon. The fight (and the scene) lasts nearly 10 minutes without much dialogue and without music. It’s just two incredibly stubborn people fighting with everything they have for control. While Anne Sullivan eventually wins this battle, I think it’s Patty Duke who wins the scene.

The Miracle Worker is entirely about the two central performances, and there are only two faults I can find here. With Anne Bancroft, the only issue I can find is that her accent isn’t consistent. At times she sounds Irish, or perhaps Slavic, or sometimes bog-standard American. I wasn’t really sure what she was going for here. Everything else about Bancroft is just about perfect, though. It’s a difficult role, one that is physically demanding in many ways, and she is absolutely up to it in every moment.

In Patty Duke’s case, she’s simply far too old. Duke was 15 or 16 when she played this role in the film, but Helen was 7 when she was first taught by Anne Sullivan. There’s no real way to make someone learning to drive pass for a 7-year-old. Duke’s performance, though, is impressive for someone twice her age with multiple dozens of films under her belt. Duke not only creates a sense of a feral and wild, uncontrolled child, but one with a tremendous will and sense of self despite the character’s limitations and handicaps. It is a fully mature performance and surprising in its depth given the assumptions that most of us will have going into the film.

The Miracle Worker is not an easy watch. It is, however, a very worthy one, and while it will leave you drained, it’s also absolutely a film that will leave you contemplating exactly what people can accomplish with time, patience, and effort. I won’t watch it again soon, but I’m absolutely pleased to have watched it.

Why to watch The Miracle Worker: The two central performances.
Why not to watch: As good as she is, Patty Duke is too old for the role.