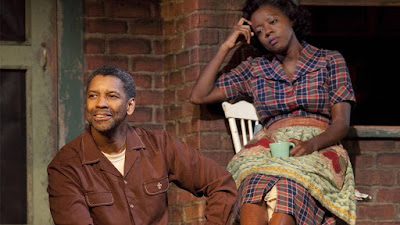 There are a few things that, when I see them in a movie, I take as something like a warning sign. One of those is an actor turned director. Sure, sometimes you discover that the actor really direct, but that’s not always the case. In the case of Fences, Denzel Washington obviously did a good enough job to get himself an Oscar nomination and Viola Davis an Oscar win. The second warning sign, and one that I take very seriously, is when a film is based on a stage play. Fences is based on the play of the same name by August Wilson. It’s a Pulitzer Prize and Tony winning play, which clearly works in its favor, but there’s always a danger that filming a play will end up just being a filmed version of a staged play.

With Fences, it turns out that Washington is capable of getting really good performances out of himself and his cast. Unfortunately, the fact that this is only his third feature as a director demonstrates the limitations of his directorial experience, because Fences, with the exception of a few shots here and there, really is a filmed version of the play. There are a few scenes added here that almost certainly aren’t a part of the actual play script—montage-like moments as we see the characters living in the world without any dialogue. When we’re back to the script, though, we’re very much looking at something that wouldn’t be out of place for a moment on a stage.

Troy Maxson (Washington) works as a garbage man in Pittsburgh in the 1950s. He’d like to drive the truck, but at this time and in this place, the only garbage truck drivers in Pittsburgh are white. It doesn’t matter to Troy that he is illiterate and doesn’t have a driver’s license. Troy works, but also carries a massive chip on his shoulder. He misspent a great deal of his youth and ended up in prison. It was there he learned to play baseball, but as a black man in the 1930s and ‘40s, the Negro League was as far as he could get. This fact—that he missed his chance to play in the bigs—has in many ways been the defining factor in his life.

Troy is married to Rose (Viola Davis), and their son Cory (Jovan Adepo) is playing on the high school football team, and is good enough that he’s getting some college recruiters wanting him to play there. Troy is against this, assuming that nothing good will come from football, sports in general, or college. What he wants is for Cory to have a job after high school and to learn a trade, and in Troy’s house, what he says goes.

There are three other aspects to Troy’s life that are central to who he is and how he approaches the world and his life. The first is his older son Lyons (Russell Hornsby) from a previous relationship. Troy sees Lyons as a lazy failure because Lyons prefers to play music rather than having a more traditional job and because Lyons comes by now and then to borrow money. The second is Troy’s brother Gabriel (Mykelti Williamson), who was seriously wounded in World War II. The wound has left Gabriel with a plate in his head and serious mental issues that eventually land him in an institution. Third, and as the story plays out, most significant, is that Troy has another woman who he has gotten pregnant.

Fences turns on three relationships. The first is between Troy and Rose. They seem like a happily married couple and are for the first half of the film or so until she finds out about Troy’s other woman. When the baby is born and the mother dies in childbirth, Rose accepts the baby to raise as her own, but tells Troy that the marriage is essentially over. Troy’s relationship with Cory is also central to the film because the two of them disagree on everything, particularly on where Cory is going and how he should be living his life. Troy is convinced that he has all of the answers and anything Cory might say that is different is simply wrong. The final relationship is between Troy and his friend Jim Bono (Stephen Henderson). Bono (the name he is almost exclusively called in the film) acts as a sort of external conscience for Troy, and when Troy is promoted and the baby is born, the two drift apart because of Troy’s life choices.

The two things that sell Fences are the performances and the story. The performances are excellent top to bottom without a weak link in the bunch. Denzel Washington is such a compelling actor when he’s given good material. He’s so easy to like in so many roles that it’s fascinating to see him playing a man who is really terrible in a lot of ways, and he does this well. Troy Maxson is a hard man, and one who is so terribly set in his ways that he is willing to give away everything to be right in his own mind.

As for Viola Davis, well, I’ve been a fan for some time. There was some talk about category fraud having her nominated for Best Supporting Actress, and I can certainly see that. It’s category fraud that paid off, since she won the Oscar, but it really seems like a starring role as much as Washington’s. Like Denzel Washington, Davis is magnetic when she’s given good material, and Fences is very good material.

What sells Fences to me is that it is very much a film about the black experience without being a film that is specifically about being black in American in the 1950s. There’s certainly some mention of race here, since the racism he experienced is a great deal of what makes Troy Maxson the man he is. But the story isn’t about that; it’s about people going through life. Rather than being a story about the African-American experience, it about life experiences of people who happen to be African-American. It’s an important distinction, and one that humanizes the film.

Ultimately, I think Fences is a tremendous story and a hell of a play and the movie is filled with great work from everyone involved, including young Saniyya Sidney who plays Troy’s daughter Raynell at the end of the film. But for all this, I’m not sure it’s anything more than just a very good movie. It sticks so closely to being staged aside from a few changes in camera angle, that it’s hard to really call it a movie experience more than it is an incredibly well produced play. But it’s a hell of a play. Put this on a stage, and it’s not hard to see why this won a Pulitzer.

Why to watch Fences: A real story with compelling characters in real situations.
Why not to watch: It is very much a filmed play.