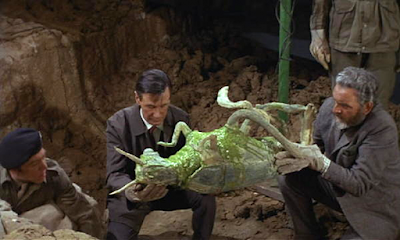 I tend to like movies from Hammer Studios in its heyday. Sure, they’re not all great, but there’s an earnestness to them that I appreciate. Quatermass and the Pit is later in their run, but it’s a fine example of what Hammer could do on a very small budget. This is actually the third Quatermass film, based on a character created for the BBC. Despite it being the third film, the character name didn’t have the same recognition in the States, so it was released here under the awesome title Five Million Years to Earth.

In London in the mid-1960s, construction is going on at a tube station in Hobb’s End when a set of skeletal remains are unearthed. Dr. Matthew Roney (James Donald), a paleontologist, is called in to examine them. He determines that the remains are of a pre-human ancestor and he estimates them at five million years old—far older than any other previous finds of definably human ancestry. Around the same time that Roney reaches this conclusion, evidence of something metallic is located. It is decided that this metallic object is likely an unexploded bomb from World War II, and a bomb disposal squad is called in.

Meanwhile, Professor Bernard Quatermass (Andrew Keir) is dealing with being told that his plans to colonize the moon have been taken over by the British military, specifically under the direction of Colonel Breen (Julian Glover). The call for the bomb squad at Hobb’s End comes in, and Breen heads over, with Quatermass trailing along. Breen is convinced that the found artifact is a V-weapon from the war, but Quatermass and Roney think it might well be evidence of something extraterrestrial.

A little digging, mainly by Roney’s assistant Barbara Judd (Barbara Shelley) reveals that Hobb’s End used to be called Hob’s End, “hob” being an old name for the devil. In fact, the area was a place that contained a number of paranormal visions and events, frequently of ape-like, misshapen dwarves that would seem to conform with the ancient bones dated by Roney. Further exploration into the metal object reveals insect-like creatures held in some sort of suspended animation, proof for Roney, Judd, and Quatermass that the object is in fact a spaceship from another world, specifically Mars. Breen, however, continues to be convinced that the whole thing is a terror weapon.

As weird as all of this is, it’s time to go really into the realm of speculative fiction. One of the men working in the pit, Sladden (Duncan Lamont), starts seeing visions of the creatures in the capsule and retreats to a church to try to dismiss them. Further investigation reveals that Quatermass is able to see some of these visions as well, but Barbara can see them clearly. When she is in proximity of the capsule, she can see what appears to be massive death and destruction on the alien world—a sort of ethnic cleansing to remove creatures that weren’t genetically perfect. She, and especially Roney and Quatermass come to the conclusion that the capsule was sent here to genetically engineer life on Earth more or less to leave some sort of genetic mark by a dying race.

Of course all hell is going to break loose, and of course it’s going to happen because of the short-sightedness of the military and Breen. The press will show up in the pit to see the “terror weapon” and of course many of them will be subject to seeing the same visions that others have been seeing, and everyone is going to lose their collective shit. The last 20 minutes or so is pandemonium and chaos, and it’s loads of fun.

The main problem with Quatermass and the Pit is that it was evidently made as a movie with a budget for television. The remains of the Martian invaders, for instance, are clearly Styrofoam models covered in green glitter paint. They look like stage props for a high school production. It’s a little sad, because there are so many good ideas going on here that the obviously weak visuals pull the audience out of the film. When Barbara Judd is having visions, our heroes have technology to essentially “record” her thoughts. These appear as little puppet shows, again pulling us out of the narrative.

It’s a shame, because the ideas in Quatermass and the Pit are really fun. This is a movie that jumps with both feet into some crazy areas and asserts its bizarre ideas with utmost conviction. I love when a film has the balls to do this—it puts out some crazy ideas and makes them just plausible enough for the film to work.

I also love the fact that we’ve got some great character actors here. Specifically, I loved seeing Barbara Shelley, James Donald, and Julian Glover. They’re generally good in whatever they are in (at least that I’ve seen), and they help elevate this well above its lousy budget.

I don’t say this often, but it’s worth saying here: I’d love to see this remade. With a good effects budget and a solid cast, this could be a pretty good mid-tier film, or a decent science fiction indie. 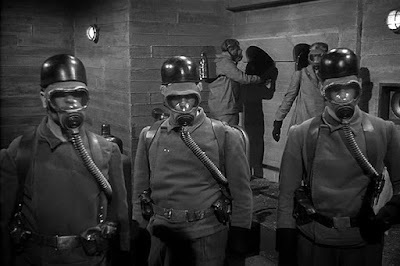 There’s often a very close tie between horror and science fiction. While the two aren’t necessarily linked, if you made a Venn diagram of horror movies and science fiction movies, there’d be a pretty good amount of overlap. It’s an overlap that I generally like, since I enjoy both science fiction and horror movies quite a bit. Quatermass 2 (called Enemy from Space in the States), the second of three films featuring Professor Bernard Quatermass (played here again by Brian Donlevy), sits right in the middle of that Venn diagram overlap. It’s clearly a science fiction movie, with invaders from outer space and a projected moon colony, but it’s also got a number of specific horror elements, too.

As the film starts, the men who work in Quatermass’s lab, mainly Brand (William Franklyn) notice a series of strange objects falling to Earth. This coincides with Quatermass himself almost being run off the road by a young couple in an out-of-control car. The man in the car is badly burned; the woman claims it was from something they found in the area, an object that Quatermass takes from them. If you guessed that it was one of those strange objects, you’d be right. There have evidently been showers of these small objects—all regularly shaped—falling in an area called Winnerden Flats. This is all of secondary concern to Quatermass, though, who has just had all of his funding pulled for his proposed moon colony.

Quatermass and his assistant Marsh (Bryan Forbes) head up to the area to investigate. What they find is an exact replica of Quatermass’s moon colony built into the area and under heavy guard. Marsh finds an intact meteorite, which breaks open and burns him, leaving a strange v-shaped mark on his face. Black-suited guards arrive and cart of Marsh and send Quatermass on his way back to his lab.

I’m going to cut to the chase here—essentially Quatermass is told that the replica moonbase is actually producing a new type of synthetic food. He goes to investigate with Vincent Broadhead (Tom Chatto), a member of Parliament. Once there, Broadhead investigates one of the giant domes and emerges covered in a black, corrosive substance, dying soon after. Through an amazing leap in logic, Quatermass concludes that the facility has been created to house alien lifeforms and the meteorites are essentially brainwashing anyone affected by them to help. The fact that the base for these aliens looks exactly like his moon colony is evidence that the infiltration goes very high up in the British government, and no one knows how long the infiltration has been happening. That means that Quatermass and the locals near the plant need to act to essentially save the world and prevent the planet from being overrun with space critters. It would also help if they could destroy what they believe to be the alien base, an asteroid-like object in near-Earth orbit.

The idea is really the best thing in Quatermass 2. In many ways, it’s a riff on Invasion of the Body Snatchers from the previous year. Here, the aliens aren’t replacing people, but are merely taking them over. In fact, this is a pretty common trope from the Cold War era. In a sense, the aliens are sort of a stand-in for communism, taking over and subverting the otherwise good people of Britain for their own nefarious ends. In a sense, it’s not really that different from The Quatermass Xperiment from a couple of years prior.

The problem is that it really isn’t that interesting. Quatermass 2 paints itself into a corner. Eventually, Quatermass stirs up the locals based on what he claims is the truth and everybody charges the facility to find out what is happening. What we end up with is something like a hostage situation without any hostages—Quatermass and the locals are pinned down inside the facility trying to kill off the alien creatures hidden inside the massive domes while the controlled humans do what they can to get them out. It’s an unsatisfying conclusion, and the story deserves better than we get.

It’s also worth noting that Brian Donlevy, despite playing Quatermass in the first two films, isn’t nearly as much fun in the role as Andrew Keir in Quatermass and the Pit. It doesn’t seem right to make Bernard Quatermass an American rather than a Brit.

Ultimately, I liked this film well enough. It’s just not something I’d get too excited about, and in terms of the Quatermass troika, it’s clearly the least of the three.

Why to watch Quatermass and the Pit: Great idea.
Why not to watch: The lowest of low budget special effects.

Why to watch Quatermass 2: A cool idea.
Why not to watch: It’s less interesting than it should be.