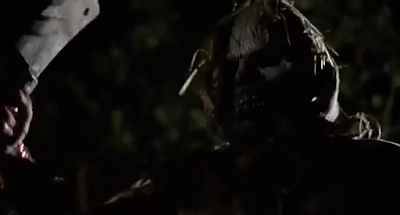 There’s a vibe to both ‘70s horror and ‘80s horror, so I find it entertaining when a film from the late 1980s has a feel that is a lot more similar to one from the late 1970s. Scarecrows is that movie. I’ll give you one guess as to what form the monsters take in this movie.

While a lot of this does seem to come right out of the 1970s, the plot is right out of the greed-obsessed 1980s. A group of special forces types hijack the payroll from Camp Pendleton and then hijack a plane to escape with the money, probably to somewhere without extradition, although they seem to be planning on going to Mexico. We learn soon enough that there is no honor among thieves, since one of them, Bert (B.J. Turner) tosses a couple of smoke grenades into the plane along with a real one and jumps out with $3.5 million.

It’s no surprise that Bert has jumped directly into something very bad or we wouldn’t have a horror movie here. Bert lands near a deserted farmhouse that is surrounded by a number of scarecrows and graves. His partners, who manage to get the live grenade off the plane before it goes off, circle around and look for a place to land while Bert attempts to drag off the money. He locates a truck that runs and starts to leave, but the truck only runs for so long. He discovers that the truck has no motor, and is naturally freaked out.

So, while the other four bad guys land and start looking for Bert and the money, Bert discovers that the scarecrows are more or less alive, much to his own personal detriment. The rest of the movie is the slow realization by everyone in the area that the scarecrows are alive somehow and that they not only kill anyone trespassing on their land, they turn them into animated scarecrows as well. This is brought home to us when Bert is finally captured by the group, beaten to a pulp and shot a bunch of times only to be discovered to be already dead and stuffed not with straw but with some of the stolen loot.

It’s probably worth discussing the rest of the cast. The leader of the bad guys is Curry (Michael David Simms), who seems to be the leader just ‘cause. In fact, big, burly Corbin (Ted Vernon) seems to have better skills and a better head on his shoulders. Jack (Richard Vidan) is the token rock-stupid member of the group, which is rounded out by the token tough-as-nails-to-avoid-stereotype woman Roxane (Kristina Sanborn). Our hapless victims here are pilot Al (David James Campbell) and his daughter Kellie (Victoria Christian), who is generally used as a hostage to keep the plane on the ground.

What happens here isn’t much of a surprise. There are a couple of pseudo-scares, and once they all realize that there is something very bad happening, it’s time to start picking them off one by one. In fact, the only real mystery is whether or not we’ll end up with two survivors or just one. I won’t reveal that here. After all, you might find yourself possessed of a desire to watch this thing and spoilers are no fun.

Scarecrows has some decent gore moments, but these are few and far between and are pretty standard for the time in which this was made. Other than that, though, there’s not a whole lot going for it. The characters are mostly dumb and fall squarely into horror movie tropes, behaving in exactly the right ways to get themselves killed and in exactly the wrong ways to actually survive.

A bigger problem is that none of this is explained. At all. We get maybe a hint or two that the original residents of the house were into some sort of demonic worship, but there’s nothing clear about that. All we get are some suggestions, like the devil-based weather vane on the top of the house. With no explanation, it becomes just something weird and kind of dumb. Since the movie runs a scant 83 minutes, it certainly could have used a couple more to explain exactly how and why the scarecrows of the title were made and why they exist.

In fact, along the same lines, the actual production of the scarecrows is pretty lame. Every time someone is about to be scarecrow-ized, we see some machinery turn on and…that’s it. Machinery turns on. I guess that’s supposed to be them getting stuffed with money or straw or whatever, but we’re never really shown that, so even that part of the story remains a complete mystery.

There’s a kernel of something good in Scarecrows but it never goes anywhere. With some more exposition on exactly what’s happening, even a friggin’ exposition-dump at the start of the film, it would at least make some sense. Instead, it doesn’t, and the whole thing suffers because of it.

Why to watch Scarecrows: Good ideas?
Why not to watch: Instead of a real story, it’s just stuff that happens.