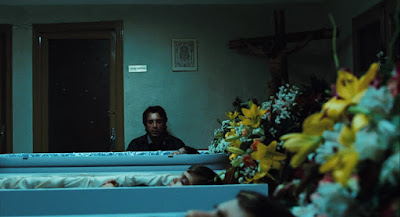 When a movie like Biutiful shows up, I wonder why I pursue the films that I do for this blog. As evidenced by many of the horror movies I post, I don’t object to a crappy movie now and then, but Biutiful is something else entirely. I cannot say that it’s not a well-made movie. Alejandro Gonzalez Inarritu doesn’t make cheap or shoddy films. But it’s depressing to the point of making the audience suicidal, and that always gives me pause.

“Misery parfait” is the term I started using a number of years ago to describe movies where nothing good happens to anyone and instead, the entire length of the film is a spiral of one depressing thing to something even more depressing. It starts out with a lot of potential for terribleness from all sides and manages to fulfill all of the promise of every horrible thing that can happen by the time the end credits roll nearly 150 minutes later.

I seriously don’t even know where to start. Uxbal (Javier Bardem) lives in Barcelona with his children, Ana (Hanaa Bouchalb) and Mateo (Guillermo Estrella). Their mother, Marambra (Maricel Alvarez), still lives in the area, but is a bipolar alcoholic who works as a prostitute. One of her clients is Uxbal’s brother Tito (Eduard Fernandez). Uxbal’s “job” is finding work for undocumented immigrants, typically from China or Senegal. He supplements that income as something like a spiritualist who can communicate with the dead. Since we need to start this misery train really running, early in the film Uxbal is diagnosed with prostate cancer that has metastasized, giving him just a few months to live.

Uxbal’s hope is to find something like closure in his dying months, but everything he attempts to do is realized with the worst possible results. Uxbal’s Chinese workers manufacture counterfeit designer goods, which are then sold on the street by the Senegalese workers. Uxbal learns that the Senegalese are also dealing drugs, which causes a crackdown on them by the police who had been paid off to let them keep selling their illegal products. When one of the workers is deported back to Senegal, Uxbal decides to help his wife Ige (Diaryatou Daff) and their child.

He also attempts to repair his relationship with Marambra until he realizes that her mental illness makes it impossible for her to be trusted with the children’s welfare. When Mateo disobeys, for instance, she leaves him home alone despite his being about seven. With the forged designer product ring broken up, Uxbal finds construction jobs with his brother for the Chinese workers. He also buys them space heaters for their living space, but the heaters release carbon monoxide, killing all of them. The bodies are dumped into the ocean, but soon wash up on shore, causing a huge scandal in the media.

The third act of the film concerns both Uxbal’s impending death and how he plans to deal with his guilt over the death of the Chinese workers and the deporting of Ige’s husband as well as finding a way to keep his children safe once he is gone.

I find movies like Biutiful to be so frustrating because they become nearly impossible to rate. On the one hand, this is a beautifully-made film. Javier Bardem is a wonderful actor, and while I won’t say that everything he touches is gold, but given good material, he is a very compelling actor. And Biutiful is good material. It’s well written and very real, and it’s also superbly acted throughout. I have no complaints about the movie on those fronts.

But it’s so overwhelmingly depressing. While the film attempts an uplift at the end, there’s no way that a film with this as the basic plot is going to be a feel-good when it wraps up at the end. This is a film that doesn’t just have bad things happen to people; it has only bad things happen to people. It never ends, either. At nearly 150 minutes, there is misery a-plenty here, with things just getting worse and worse every minute the story progresses.

So do I like this film? Do I respect it instead? Is it a film that is even really capable of being genuinely liked by anyone? I don’t know. I’m at a loss here, and I’m not sure that there is a good or convenient way to resolve that problem. Biutiful is the sort of movie that is good and important in just about every way a film can be, and yet it is a terrible slog to get through. It took me days to work my way through all of it because each thing that happens leads to terrible and immediate consequences. I don’t generally like films where the point seems to be hitting the main character (and everyone else) as hard as possible as often as possible.

So do I recommend this? It’s hard to despite it being a well-made film with a story worth telling. See, I generally like my readers and I’d prefer you didn’t kill yourself, and Biutiful is the sort of movie that makes suicide seem like a legitimate option.

Why to watch Biutiful: It’s splendidly acted.
Why not to watch: When it’s done, you’ll want to die.