Rain on the Scarecrow, Blood on the Plow 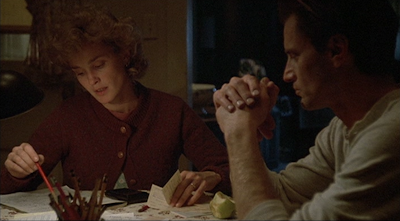 I don’t remember the 1984 Oscars because I didn’t really care that much about them toward the end of my senior year in high school. I do remember some of the music and events of that time, though. I remember that 1985, the year of those Oscars, was the year for Farm Aid in Urbana-Champaign, where I happened to be a student at the time. It was also the year John Cougar Mellencamp released Scarecrow, an album that, at least in part, talked about the fading of the American dream. The title track was very specifically about the fading of the American family farm. As it happens, 1984 was a year for movies about a similar theme. Three of the Best Actress nominees were for stories focused on farms. There was The River with Sissy Spacek, Places in the Heart with Sally Field, and finally Country featuring a nominated performance from Jessica Lange.

And guess what? Country is about a family that is about to lose a farm that has been handed down for generations for more than a century. They simply can’t make the farm work because of the drop in crop prices and the rise in costs of operation. The villain of Country is not a specific person, but the FHA, who loaned money to farmers based on inflated land prices and then came to collect when those loans couldn’t be paid off. I’m not kidding when I call this the film’s villain. Evidently, Ronald Reagan took this film as a personal attack on his administration’s farm policies.

This film will concern the fate of the Ivy family. While Gil (Sam Shepard) is the putative head of the family, the real power lies with Jewell (Jessica Lange), the glue that holds everyone together. Also on the farm is Jewell’s father Otis (Wilford Brimley) and Gil and Jewell’s three children, Carlisle (Levi L. Knebel), Marlene (Therese Graham), and baby Missy (Stephanie Stacie-Poyner). The film opens during harvest when the family has a close call with something approaching a tornado. Carlisle is almost killed when he is buried in grain, but everyone ends up more or less in one piece.

From here, Country is a sad lesson in economic reality. Crop prices have dropped drastically, and the year hasn’t been the best. The Ivys were forced to buy a hundred bags of feed for their sheep because there was no rain for a good six weeks, meaning that the sheep couldn’t really feed on the pasture land. Unfortunately, they’re not allowed to make purchases like that with FHA loan money without prior approval. Jewell is convinced that she did that that approval, but the FHA has started proceedings to take the equipment and the family farm away. This is headed reluctantly by local rep Tom McMullen (Matt Clark) at the behest of his boss, Fordyce (Alex Harvey).

Of course, the Ivys are the only people in the area up to their necks and starting to lose their footing. Other families are on the same FHA list, which means we’re going to start seeing auctions of equipment and land in the area soon. Jewell does some calculations and discovers that it costs them far more to grow their crop than they can make selling it, meaning that they are slowly sliding into more and more debt with no possible way to get out of it. All of this causes a rift between members of the family, but especially between Gil and Otis. The land comes from Otis’s side of the family, and in his opinion, it is Gil who has managed to screw things up so badly that the family is now going to lose it.

I’d love to tell you that there is a wonderful uplift here. There sort of is, but the film honestly cheats the ending by having a big, climactic moment between Jewell and Fordyce and then giving us the rest of the story in a voiceover as the credits roll. It’s kind of cheap, and honestly, it didn’t sit that well with me.

So let’s talk about what Country is beyond the veneer of family farms and the wicked ways of FHA loans. This is a film that is designed to make Jessica Lange into a farmland heroine. The two most prominent men in her life, Gil and Otis, aren’t really able to cope with things. This is especially true of Gil, who, once he realizes that there’s literally nothing he can do to save the farm, spends what money the Ivy family doesn’t have getting drunk and threatening his son. No, it’s Jewell who is going to keep this family together in any way she can. There’s a hell of a lot of grrl power here before that idea was even invented.

And I get it. It works for the most part. Gil goes off on his rage/sorrow/frustration-fueled bender because he’s being shown to be a failure, unable to make a farm work on some of the richest and most productive farmland in the country (I assume it’s in Iowa; there’s at least a mention of banks in Des Moines, so that makes the most sense). Jewell, since the land is technically passed down to her, is fighting not just for her family, but for her family’s legacy.

The issue I take here is that there really ends up not being much of a resolution for any of this. Jewell gets angry, but is an impotent anger because she can’t do anything with it. Without the deus ex machina that appears during the credits, her fight is a lost cause. This is an exercise in watching someone struggle mightily against tidal forces that cannot be defeated.

It’s well acted, certainly. Jessica Lange was often a compelling and interesting actress on screen. Here, she’s not given a great deal to do except be resolute in trying to keep her family together and yell at people who want to take her land. I’ve liked her a lot better elsewhere.

Go listen to Mellencamp’s Scarecrow. You’ll get the same story and save yourself some time.

Why to watch Country: You should always know where your food comes from.
Why not to watch: You’ll get the same thing listening to John Cougar Mellencamp’s Scarecrow album.