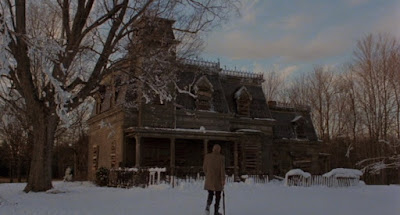 I vaguely remember when Ghost Story was released in theaters. I remember it only because at the time one of my sisters was reading a good amount of horror novels and had read Peter Straub’s book. It was maybe half a year before I became a real horror fan, so Ghost Story is one from just before the days when I learned to love the genre. While it’s relatively well thought of, it’s not considered a classic, which explains why I’m just getting to it now.

Before I get into my typical plot rundown, I want to specifically look at the four men whose names top the cast list. Probably the biggest sell of Ghost Story isn’t the fact that it comes from a Peter Straub novel, but that it stars one man whose film career began in the silent (Douglas Fairbanks, Jr.), two whose careers started in the early talkies (Melvyn Douglas and Fred Astaire), and one whose career in front of the camera started late, but who became a legendary supporting player almost immediately (John Houseman). If nothing else, it’s a real treat to see these four men on camera at the same time. It’s also the final cinematic screen credit of all of them except Houseman.

We start with the sudden and surprising death of David Wanderley (Craig Wasson) when the woman he has evidently been sleeping with turns into something akin to a rotting corpse in front of his eyes. David, shocked, falls backwards out his apartment window and down to the pavement below. This causes his brother Don (also played by Wasson) to return home for the funeral. Don has his own weird story about a woman, and it’s soon evident that the woman in question is the same one who seems to have been the cause of David’s death.

Back in Don’s old home town, we learn that his father, the town’s mayor Edward Wanderley (Fairbanks) and his three friends, Dr. John Jaffrey (Douglas), businessman Ricky Hawthorne (Astaire) and lawyer Sears James (Houseman) have a little club that meets once a week where the members tell each other scary stories. As it happens, all four of the members are starting to have trouble sleeping and nightmares. Soon after Don arrives home and reunites with his estranged father, Edward Wanderley walks outside in his pajamas (it’s winter and snowy) and more or less falls off the town bridge onto the ice below, dying instantly. Suicide? Perhaps. But then there are all of those nightmares from the other men and Don’s own story that seems to touch on the supernatural as well.

All of this seems to center around a woman who, for Don and David, was named Alma and for the four old gentlemen was named Eva (and is played by Alice Krige in both cases). In the past, all four of the men seemed to be in love with Eva, although she seemed to be the most interested in Edward. I’m not going to get involved in what happens here, because that’s actually a main part of the plot. In the case of Don, Eva/Alma enters his life and creates something of a whirlwind of sexuality, but then becomes very strange when it comes to forcing him to get married specifically in the town he grew up in. Of course everything is connected, and that’s really what the second half or so of the film is about.

While Ghost Story is interesting in a lot of ways, it also has some real problems. The biggest problem is that the Eva/Alma character seems to be assisted by a couple of normal flesh and blood people in her interactions with our four older gentlemen and with Don when he returns to town. These two—Gregory (Miguel Fernandes) and Fenny Bate (Lance Holcomb) are completely unexplained here. Why are they in contact with what seems to be a ghost? And why are they helping it? How do they know about Alma/Eva? Why is Fenny evidently a feral child? And what the hell happens to them at the end? They are a huge, weird, unexplained part of the film that doesn’t make a lick of sense to me and seems to have nothing to do with the story that is told on screen. Lose them, and we lose pretty much nothing, and the story we are told ends up being tighter and more interesting. In fact, the only thing I really like about them is that Fred Goddam Astaire pulls out a knife at one point and shanks one of them. How cool is that?

I didn’t dislike Ghost Story, but I think this is a case where I really want to read the book. It seems like a book that has this much acclaim (Stephen King called it the best supernatural horror since ones like The Exorcist and Rosemary’s Baby) should end up with a better film. When it hasn’t, it would seem that the film is likely to be the problem.

Why to watch Ghost Story: Fred Astaire straight up shanks a dude!
Why not to watch: Too many unsatisfying loose ends.