Ten Days of Terror!: The Ghost of Frankenstein 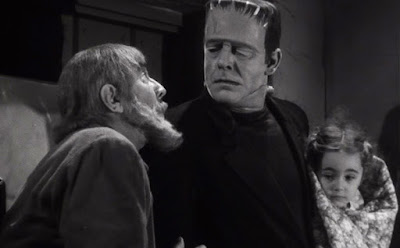 In the early days of the Universal monster films, few of those monsters seemed to have as much traction as Frankenstein’s Monster. The Ghost of Frankenstein was the fourth movie in the series. The first two featured the original Doctor Frankenstein. The third movie, Son of Frankenstein featured the doctor’s eldest son Wolf. This time, we’re down to the doctor’s second son, Ludwig (Cedric Hardwicke). It does force the question that as we continue to go through various Frankensteins for additional sequels how far into the family tree we might eventually find ourselves. One considers the possibility that eventually we’ll be dealing with Dave Frankenstein, the original doctor’s second cousin twice removed.

The previous movie saw Wolf Frankenstein killed and the monster entombed in a sulfur pit. But the people of the village believe that they are still cursed by the past events. It is their belief that the curse has stayed with them because of the presence of Frankenstein’s castle. There are even rumors that Frankenstein’s assistant Ygor (Bela Lugosi) is still alive despite having gone through enough to kill several men. The townspeople decide that the only thing to do is blow up the castle, and so they do. And hey! Ygor really is still alive! The peasants charge in and blow things up, not realizing that in so doing they have dislodged chunks of the sulfur pit, revealing the monster (now played by Lon Chaney Jr.). An overjoyed Ygor helps free his friend, and the two toddle off in search of Ludwig Frankenstein in the hopes of repairing the damaged body of the monster.

So Ygor and the monster wander into Ludwig Frankenstein’s town where they find that Ludwig has the reputation of being a “healer of minds.” The monster encounters a little girl who has lost her ball and, as was established in earlier films, he likes kids, so he helps her. Of course he manages to kill two villagers along the way, which gets him arrested. Ygor contacts Ludwig, who confronts the monster at the monster’s trial (yes, he goes on trial), and Ygor helps the monster escape.

The upshot of all of this is as follows: Ludwig learns that the creature’s brain is the brain of a criminal, which is what makes him so evil. The monster, in his rampage, kills one of Ludwig’s friends, a Dr. Kettering (Barton Yarborough), so Ludwig decides that he will put Kettering’s brain in the creature, thus redeeming the monster completely. Ygor wants his own brain put into the monster, something he tries to arrange by shaming Ludwig’s assistant Dr. Bohmer (Lionel Atwill). The monster wants the little girl’s brain instead. And the townspeople start to get antsy, since no one seems to know where the monster is.

Because this is a movie from 1942, we also need to cobble in a love story. In this case, that love story is between Ludwig’s daughter Elsa (Evelyn Ankers) and the local magistrate, Erik Ernst (a surprisingly young and almost unrecognizable Ralph Bellamy). Honestly, these two characters barely figure into the main narrative and were clearly added because every movie of the time needed a romance of some sort, and none of the principle characters would have worked in that respect.

The Ghost of Frankenstein honestly isn’t that notable. Lon Chaney Jr. plays the monster pretty well, honestly. He’s no Karloff, but it’s okay. We’ve more or less ditched the idea of making the monster sympathetic at all in this case. There’s a mild attempt at this with him being nice to the little girl, perhaps, but mainly he’s just supposed to be an unstoppable brute. He’s somehow less menacing despite the lack of a sympathetic portrayal. It might be that he looks less like a monster and more like an offensive lineman for the Chargers. Get rid of the neck bolts, and you’ve pretty much seen guys who look like him.

It’s a fun movie for Bela Lugosi, though. If you thought Lugosi was a decent scenery-chewer, you haven’t seen this, where every action and phrase is over-acted completely. And yet it kind of works. Lugosi manages to be both comic and menacing at the same time, crepe beard and all.

But really, that’s it. Everyone else here, and I do mean everyone, is absolutely bland. Ludwig Frankenstein is about as interesting as plain gelatin. The same can be said for Elsa Frankenstein and Erik the magistrate. Aside from the monster and Ygor, there’s not a memorable character, speech, scene, or even moment here, and that’s really what is disappointing.

“Dull” is never a good way to describe a movie. When that movie is a mere 68 minutes long and you still can’t find a way to really engage the audience, it’s a movie that has significant flaws all the way through. There could be a story here; the Frankenstein myth certainly has a lot of possibilities. It’s just not this story.

Why to watch The Ghost of Frankenstein: Lon Chaney Jr. plays the Monster well, and Bela Lugosi as Ygor!
Why not to watch: Man, does it fall short of its predecessors.