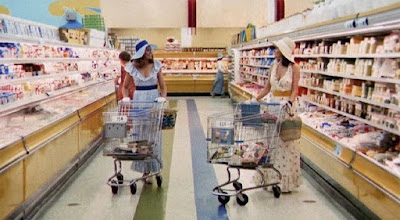 I haven’t seen the remake of The Stepford Wives, but my guess is that it softens the ending and by doing so, it probably changes the entire meaning of the film. That seems to be the way things work often enough with remakes. The original, while it certainly has a few issues and had some arguments in the production, is surprisingly dark. I mean this in the best way possible, and because of this, it approaches something much closer to actual horror. The Stepford Wives, at least the original, doesn’t go for the gross out, but attempts to get at something a lot more existential.

The truth is that I’m probably going to spoil this movie with the review. I’m saying this now and here so that I don’t have to use spoiler tags. In truth “Stepford wife” is a phrase that I’ve heard enough outside of the context of this movie, meaning that while the ending is certainly in doubt for someone who hasn’t seen it, the basic plot really isn’t. Kind of like Psycho or The Sixth Sense, at this point, you almost certainly know the basic story, so if I reveal it to you, you should probably move out from under that rock you’ve been living under.

As the film starts, the Eberhard family is relocating from New York City to Stepford, CT. It’s a fairly posh suburban town with a number of men who evidently work high-paying and high-pressure jobs in the city. All of the women of Stepford are apparently perfect homemakers. They are always dressed impeccably and keep perfect homes with perfect children. Joanna Eberhard (Katharine Ross) doesn’t keep a perfect house and isn’t enamored of the move. However, the new house will give her enough space to build her own darkroom, something she wants to pursue her avocation of photography. Her husband Walter (Peter Masterson) works long hours in the city, and soon after the move, spends his evenings with the men’s group in the town.

Joanna has a problem with most of the women in town, in fact. It seems that they are all obsessed with their husbands and with housecleaning. The only friends Joanna finds are Bobbie Markowe (Paula Prentiss) and Charmaine Wimpirs (Tina Louise). Shortly after Joanna and Bobbie befriend Charmaine, who is frustrated with her husband and loves tennis, changes completely. Like the other Stepford women, she becomes obsessed with her husband’s happiness and even has her personal tennis court torn up for a swimming pool.

Both Joanna and Bobbie become convinced that something terrible is happening in the town, something that is specifically affecting the women. That one of the leading men in town, Dale “Diz” Coba (Patrick O’Neal) once worked for Disney and mentions later of animatronics at Disney theme parks is a nice little hint as to what is actually happening. When Bobbie changes from her messy, entertaining self into just another Stepford woman obsessed with cleaning and making the house perfect, Joanna desperately wants to leave, but Walter resists, forcing her to realize that he may well be complicit in what is happening and what is apparently planned for her.

The reason that The Stepford Wives works at all is because it fully embraces the weird darkness it wants to descend into and it buys into it completely. There’s plenty of opportunity for some traditional horror movie moments here—jump scares and gore—and the film resists these easy temptations completely. In fact, aside from the final 15-20 minutes, most of the film takes place in the broad light of day and in full sunshine. Everything is open and exposed, except the big secret of Stepford, which is a big part of what works.

In Shadow of a Doubt, the Joseph Cotten character says that if you ripped the fronts off the houses, you’d find swine. David Lynch spends a great deal of his films exploring the twisted hell that lies beneath everyday life. That’s what lies at the heart of The Stepford Wives as well—a hidden world of particular evil behind a perfect exterior. It’s a not-so-subtle dig at the American dream of the perfect home and the perfect family, presenting us with a vision of this that is rotten underneath its exterior.

That, primarily, is what works with The Stepford Wives. It’s not about grossing the audience out, but really going for the existential horror of the world and of what we are capable of doing to each other in pursuit of that particular dream. Not a lot of movies really go for that deeper darkness and fewer succeed, but this does in large part.

There is a single significant failure in the film, and it’s in the casting of most of the wives. The wives are perfectly attractive (as they would be for a film that posits what this film does), but are not the sex bombs they really should have been to make the film really work as it should. They are all a bit dowdy and dressed in not in the expected hot pants and miniskirts of the mid-70s, but in long, flowy gowns. In fact, only Katharine Ross, Paula Prentiss, and Tina Louise really look the parts.

That’s serious, and evidently led to problems between director Brian Forbes and screenwriter William Goldman. This does damage the film a bit, but the underlying idea is so strong and pulled off so well, that it’s also a problem that can be overlooked for what The Stepford Wives does.

Why to watch The Stepford Wives: It’s a fantastic comment on the American dream.
Why not to watch: The casting choices change its edge.