Ten Days of Terror!: Land of the Dead

Films: Land of the Dead
Format: IFC on rockin’ flatscreen. 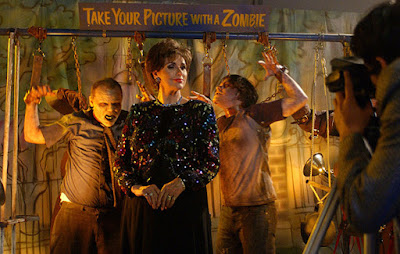 When George Romero created Night of the Living Dead he essentially invented a new subgenre of horror films, mainly by not having the original film copyrighted. Sad for him, happy for horror fans everywhere. Romero revisited his undead zombie world five times. Sadly, each of these movies has ended up with declining reviews; the highest point is Dawn of the Dead and the lowest is the most recent, Survival of the Dead. Of the five after the original film, Land of the Dead falls in the middle—the fourth in the series and the midpoint of the five sequels in terms of critical reception.

Each of Romero’s zombie films explores a different aspect of the world using the zombies as metaphor. In the case of Land of the Dead, Romero is going to a different aspect of what he looked at with Dawn of the Dead. Where that film explored mindless consumerism, there is a strong undercurrent of wealth inequality in Land of the Dead. It’s a theme worth exploring, and frankly, it’s worth exploring more than Romero does it here. This is undoubtedly one of the ideas that is at play in the film, but it’s really only seen in the margins except for in a few places.

We’re in Pittsburgh for this one. Since Pittsburgh lies at the confluence of multiple rivers, the city has a natural barrier on several sides. In the dead version of Pittsburgh, the land side of the city is walled off with an electrified fence. Inside the city, the wealthy live in a complex of luxury apartments called Fiddler’s Green while the poor fend for themselves as best they can. The effective ruler of the city, Kaufman (Dennis Hopper) controls a small army that ventures into the surrounding towns for food, ammunition, antibiotics, and other necessities while the wealthy sit back in relative comfort and safety.

The man leading the expeditions outside the walls is Riley Denbo (Simon Baker), who is assisted by Cholo (John Leguizamo) and his dim-witted but loyal companion Charlie (Robert Joy). They and their team pilot Dead Reckoning, a massive assault vehicle specifically designed to penetrate heavily zombie-infested areas without much risk to the crew. Denbo wants out, though, putting Cholo in charge of the rig. All Cholo wants is to move into Fiddler’s Green, and he’s pretty sure he’s finally racked up the money to do so. But, he’s not really Kaufman’s kind of people, so he’s denied. Furious, Cholo and his crew hijack Dead Reckoning and attempt to hold the upper class hostage.

Ah, but meanwhile in Pittsburgh, we get some inklings of unrest from the underclasses. Riley and Charlie rescue a prostitute named Slack (Asia Argento) who was essentially sentenced to death by zombie cage match for helping the resistance. This puts them all in jail, and since Dead Reckoning has gone missing, guess who is going to be sent after it. Yeah, you can see that coming from a mile away, right?

Anyway, the big twist here is that the zombies are no longer mindless slow-moving meat sacks. Oh, they’re still plenty slow-moving (Romero zombies, after all), but in Land of the Dead, they are starting to show signs of intelligence. Specifically, they can now plan and have started to learn to use tools. Further, they can adapt to new situations. The zombies are led by one officially named Big Daddy (Eugene Clark). At the start of the film, all of the zombies are starting to show something like an attempt to return to human life. Big Daddy ran a gas station, and now whenever a zombie steps on the hose that announces a customer, he comes out and attempts to pump gas. By the end of the film, he’s fully figured out how to use tools and has started to teach other zombies to do the same.

Here’s the thing—you don’t really go into a George Romero zombie movie for the great acting or even for the scintillating plot. Sure, the symbolism is often worth the price of admission, but the real pull here is the gore. In fact, while Day of the Dead received decent critical acclaim, the knock against it from the horror geek community was that there wasn’t nearly enough gore. There’s a bit more in Land of the Dead, but this is not the explosion of carnage of the first two films. There are certainly some scenes of it, but honestly, nothing you haven’t seen before.

And so, while the gore is decent, it’s not earth-shattering. It really is the story itself that has to hold the picture together, and it kind of does. This is not the shock of the first film or the spray of blood and viscera of the second. It’s also not nearly as cerebral as the third film (although it does play nicely on the idea that the zombies were starting to develop intelligence in Day of the Dead). But it does contain a very strong idea, and is notable for being the second film in the series with an interesting zombie character.

The downside is that it’s predictable. You can pretty much tell who is going to live and who is going to die from the start. Oh, you probably won’t guess them all right, but you’ll get most of the living and dead guessed correctly within the first couple of minutes of meeting them. This is the part of Romeo’s edge that he’s lost. Both Night of the Living Dead and Dawn of the Dead were not merely shocking in what they depicted, but in what happened to the characters. That’s not the case here, and it’s to the movie’s detriment.

I enjoyed Land of the Dead, even if I knew where the beats were going to happen and where all the jump scares were. Still, while it can’t match the magic or the power of the original trilogy, it’s a decent continuation of the series.

Why to watch Land of the Dead: Romero in his element.
Why not to watch: Romero had never really regained the brilliance of his first two installments.

Email ThisBlogThis!Share to TwitterShare to FacebookShare to Pinterest
Labels: George Romero, horror, Land of the Dead