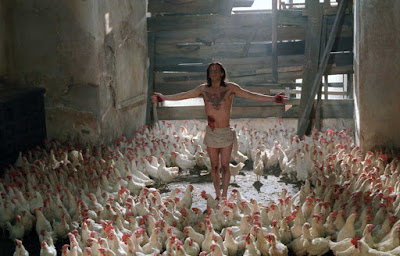 So how the hell do I explain Santa Sangre? I’ve only seen one Jodorowsky film before this one, but I know enough about him and his various cinematic visions that I knew at least a little of what to expect going in. Jodorowsky is all symbolism, and because of this, the actual film is, to quote Nolahn, one of the only podcasters I listen to, “crazy town.”

And yeah, this is straight up crazy town. Tons of symbolism, tons of hallucinations, and since much of it takes place in a traveling carnival/circus, there’s a lot of that shit going on, too. It’s also almost entirely Oedipal. I get that there are people who actually buy that is a legitimate way to discuss human psychology, but I don’t. Whenever a film takes a Freudian approach to anything, there’s a part of my brain that simply rebels. No matter how pretty or weird or symbolic this film gets, some of me things that the Freudian stuff downgrades it.

Anyway, we start in an asylum where Fenix (Axel Jodorowsky, the director’s son, and someone who looks disturbingly like Barry Pepper) believes himself to be some sort of bird of prey. This may be because of the bird tattooed across his chest. Then it’s time for backstory. Fenix (Adan Jodorowsky at this roughly 12-year-old stage) is the son of Orgo (Guy Stockwell) and Concha (Blanca Guerra). Orgo runs the traveling carnival and also acts as the knife throwing act. Concha does a high wire and trapeze act.

All would be fine except for the fact that Orgo is clearly having an affair with the unnamed tattooed woman (Thelma Tixou) with whom he performs his very sexualized knife throwing act. The tattooed woman has an adopted daughter named Alma (Faviola Elenka Tapia as a child, Sabrina Dennison as an adult) who is deaf and on whom young Fenix has a crush. Concha worships a young girl she considers a saint—the girl was gang raped, and when she fought back, her attacks cut off her arms. When the temple to the girl (complete with a pool of the holy blood of the title) is set to be knocked down, a priest comes to see it, declares it sacrilege, and the temple is destroyed.

A few other important events happen here as well. First, Fenix gets his chest tattoo when his father literally carves it onto him with one of his throwing knives. Second, Concha finds her husband and the tattooed woman consummating their affair. Upon discovery, she douses his junk with acid. He reacts by cutting off Concha’s arms and then cutting his own throat. The tattooed woman drives off with Alma, separating our two young lovers.

Now we jump back to the adult Fenix, and we need to get him out of the asylum. On something like a day trip out with a few other inmates, Fenix encounters the tattooed woman, who is now a prostitute and who doesn’t recognize him. The woman is also attempting to prostitute Alma, who fights off a “client” and runs away. The tattooed woman is then killed by an unseen assailant, although let’s be honest—it’s not that hard to figure out. It’s especially not hard when, back in his room, Fenix plans an escape and finds his mother waiting outside for him.

I’m going to wrap this up now, despite the fact that we have a good half of the film left to go. Fenix and Concha create an act where Concha speaks and Fenix stands behind her, acting as her arms. It’s soon evident that this is the way the two of them live. Every time Concha wants to do anything—knit, play the piano—Fenix gets behind her, slips his arms through the sleeves of whatever she’s wearing, and performs the action for her. When Fenix starts to become interested in another performer, Concha forces him to kill her. Near the end of the film, we get a sense that this has happened frequently. This happens specifically because Fenix has hallucinations now and then that intrude on his reality. And, of course, Alma is going to show up again by the end.

Jodorowsky’s films, and yes, I realize that I’ve only seen two of them, are difficult because they specifically play with reality. They are in many ways like a more modern Bunuel film in that reality is simply whatever the filmmaker has decided it is. In the case of Jodorowsky, that reality is a hell of a lot of symbolism. In this case, a lot of that symbolism is clearly Freudian. The relationship between Fenix and Concha is clearly more than a little too close, and when we get to the end of the film, we see just how clearly this is based on Freudian crap.

You can say what you wish about what I’ve said here. Santa Sangre tends to be highly regarded as a film, and I understand why. It’s pretty and it’s surreal, and that’s attractive to a lot of people. I can’t get past the shitty psychology, though. Fenix is not only clearly dependent on his mother, he’s completely servile toward her, and there is clear sexual tension between them. It just comes off as gross.

So, Santa Sangre plays pretty heavily on the same sort of tropes as Psycho and a whole lot of other films. It does so while maintaining a symbol-heavy story, much of which is clearly taking place inside Fenix’s head. I get at least a part of where Jodorowsky was going (I’m certain I didn’t get all of it), but a lot of where he’s going I think is pretty much bad psychoanalysis, and that’s going to downgrade the film at least a little.

Why to watch Santa Sangre: It’s certainly pretty.
Why not to watch: Freudian bullshit.