Ten Days of Terror!: The House that Dripped Blood 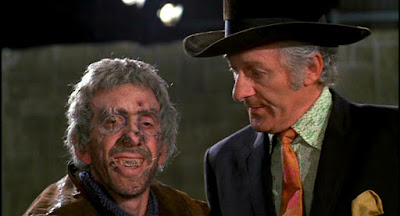 Anthology films don’t always work. The biggest problem with them is that they often tend to be uneven. Many a horror anthology (and let’s be honest here—most anthologies are horror anthologies) has an excellent example or two and a few others that are simply marking time. Even in a case where most of the stories are good (like Creepshow), there’s still a definite hierarchy, meaning that a rewatch is going to be filled with different moments of excitement for the good parts and dealing with the weaker parts. The House that Dripped Blood is an anthology film that manages to avoid a lot of the problems of the style. There are only four stories, allowing each of them some space to play out without any of them overstaying their welcome.

The framing story here helps as well. A police detective named Holloway (John Bennett) is investigating the disappearance of an actor who has rented an old house. When the inspector starts investigating, he discovers that the three occupants of the house before the actor have also had unique, tragic, and deadly occurrences in the house. The film, then, is a trip through these four stories in chronological order. We meet, from start to finish, a writer (Denholm Elliott) obsessed with a murderer he has created for a new book; A retired man (Peter Cushing) entranced by an image of an old love found in a wax museum; a man (Christopher Lee) who seems abusive toward his young daughter but may have reasons to fear her; and finally a horror movie actor (Jon Pertwee) who gets a little more than he bargained for with the purchase of an old cloak.

As mentioned above, one of the biggest problems with anthology films is that they tend to be uneven. Good ones, like Creepshow tend to build from weaker stories to stronger ones. That’s also the case with Dead of Night, which is sort of the granddaddy of horror anthologies. The House that Dripped Blood doesn’t specifically build from weakest to strongest. The third story, “Sweets to the Sweet,” is in many ways the most interesting and the most disturbing while the fourth and final one, “The Cloak,” has a good amount of humor.

The selling point of an anthology film is that with the need to tell a story quickly, the films are forced to get to the good part right away. That’s part of the downside as well. With a film like, say, The ABCs of Death, the films are forced to be so short that there are bound to be some that simply don’t work or make sense. Here, we’ve got enough space for each of the films to get a good 20 minutes or so, with about the same amount of time devoted to the framing story and credits. That allows each of the stories to be a quick hit that necessarily gets to the scares but also gives enough depth to things that we actually care about what is happening. The idea that all of the stories have a connection—they take place in the same house, after all—adds an interesting sort of unity to what happens.

The stories are as follows:
“Method for Murder”: a horror writer rents the house in the hopes of getting some work done. He envisions a strangler as the killer for his next book, but then starts seeing the killer around the house and even threatening his wife (Joanna Dunham).
“Waxworks”: A man retires to the town and discovers a wax museum. Inside, the owner (Wolfe Morris) has depicted a particular woman as Salome. The man believes this is a woman he once loved. When his friend (Joss Ackland) sees the wax statue, he falls in love with her as well and soon becomes obsessed.
“Sweets to the Sweet”: A man and his young daughter (Chloe Franks) move into the house. He is a viciously stern man, refusing even to let his daughter have a doll to play with. The teacher he hires (Nyree Dawn Porter) attempts to discover the reasons behind his actions.
“The Cloak”: An actor on a no-budget horror movie finds that even his costume is below standard. He finds his own replacement only to learn that when he wears the cloak, he actually becomes a vampire.

So here’s the thing: The House that Dripped Blood is lots of fun. Only one of the five stories (including the frame) even gets close to being scary. And for the lurid title, there’s not a single drop of blood appearing on screen at any time here. But really, it’s difficult to be terribly upset with a film that stars Peter Cushing in one segment and Christopher Lee in another. There’s a charm here that just doesn’t exist in most modern horror films.

Why to watch The House that Dripped Blood: Four anthology stories that actually work.
Why not to watch: For a house that’s supposed to drip blood, there’s not a drop of it anywhere.