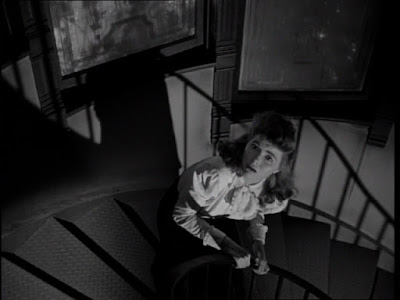 In my mind, I think there’s something a little innocent about some of the classic horror/thriller movies from the 1940s. I mean, we’re pretty much guaranteed something akin to a happy ending, and we’re not going to see anything in terms of blood or gore. What this means is that the filmmakers had to rely on other things to get the scares and the tension, and I think it often makes for a better movie. It’s easy to gross out an audience. It’s a lot harder to get them to think and be nervous because of atmosphere and genuine tension. Gross outs are fun, but cheap. I like it when the director works for it. And so we have The Spiral Staircase from the mid-1940s, a thriller that will give us a couple of deaths and a serial killer and, admittedly, some psychobabble to explain it all away.

Helen (Dorothy McGuire) is watching a movie in a town near Boston. Since we’re around 1916, it’s a silent picture. Meanwhile, upstairs in the same building, a murder of a lame woman occurs. The police are called, as are the two doctors in the town, who confirm that the woman is definitely deceased. The doctors spar a bit, and the younger of the two, Dr. Parry (Kent Smith) offers to give Helen a ride home. Helen silently agrees, silently because we learn that Helen is mute and has been for years.

Once Helen returns to the home where she lives and works, we are introduced to the rest of the players. The home is owned by Professor Warren (George Brent), who is busy caring for his ailing step-mother (Ethel Barrymore, in a role that earned her a supporting Oscar nomination). Also in the house are the professor’s step-brother Steven (Gordon Oliver) and his secretary Blanche (Rhonda Fleming) who was once involved with the professor and is now involved with Steve. We have a drunk cook (Elsa Lanchester), her handyman husband (Rhys Williams), and the nurse (Sara Allgood), who Mrs. Warren hates.

Eventually, the constable (James Bell) comes around to tell everyone that he’s tracked the killer to this general area. He also mentions that all of the women who have been killed have had some sort of physical or mental affliction. This means that Helen is certainly in danger as a potential victim. And, since we now know that the killer is tracked to the area of this house, it’s a good bet that the killer is one of the people in the house, and the only one we can be sure it’s not is Helen herself.

Here’s the thing--The Spiral Staircase almost certainly worked better on its release than it does now. The reason is that the film is set up in particular ways to get the audience to think in particular directions. It’s a tactic that is common in a lot of movies, but done fairly obviously here, and it’s been duplicated a lot since the release of this film. That’s not a slam against this movie; it’s simply a realization that most people in the audience are going to figure things out long before we get to the ending. In a way, it’s a compliment to The Spiral Staircase, because I think a lot of movies that have followed it have gotten this trick specifically from this movie.

The larger and more significant problem here is that The Spiral Staircase depends on a great deal of Freudian psychology to make the whole thing work. We learn very quickly that Helen suffered a trauma as a child and hasn’t spoken since. Her muteness isn’t from anything physical, but entirely mental and psychological. It’s not going to be a surprise to anyone that Helen is probably going to talk by the end of the film. After all, it’s all psychological, and those are problems that can be fixed just by applying the right new trauma at the right time.

So let’s talk performances here, because in any film like this one, once we get past the plot, it’s the people who sell the narrative. Dorothy McGuire is fine as Helen. Her job is mainly to look pretty, mime things, and have very large eyes whenever she thinks she’s in danger. The men are nothing special here with the exception of Rhys Williams, who should have had a few more scenes than he did. No, this is a film that belongs to Elsa Lanchester, who has a great deal of fun playing a woman who likes brandy a little too much. Even more than that, this is Ethel Barrymore’s film. Ethel, bedridden and cranky, is the absolute highlight of the film.

The Spiral Staircase is entertaining, even if the psychology is stupid and even if now, 70+ years later, it’s disturbingly easy to know what is going to happen before it does. Watch it for Ethel; she’s earned the right to your attention.

Why to watch The Spiral Staircase: A solid thriller, and Ethel Barrymore is bad-ass.
Why not to watch: It’s been copied a lot, which spoils the ending. Also, it’s really Freudian