Ten Days of Terror!: A Bucket of Blood 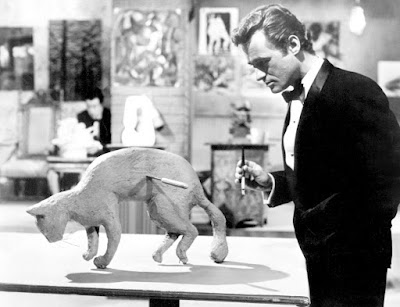 I’ve waxed rhapsodic about the influence of Roger Corman on the film industry before and almost certainly will again. For a month on TCM in 2016, Corman did a guest spot talking about American International Pictures movies, many of which he directed or produced on minimal budgets and filmed in less than a week. I like Corman. Sure, a lot of his movies are shit, but I like Corman as a person, or at least I think I would if I ever got a chance to meet him. He seems like a really cool guy, someone who doesn’t take himself that seriously but just wants to make a few movies and have a good time doing it. He also seems to realize that a lot of his movies are crap, but he actually has something to say with some of them. A Bucket of Blood has one of his better titles, so I was interested in seeing it.

According to Corman in the interview preceding the film, he got the idea for a horror comedy when he noticed an audience watching one of his films. He’d arranged a particular series of shots to get a scare and got it, and then after the initial shock, the audience laughed. So, the idea for a horror comedy seemed natural—get a scare, then get a laugh after the scare. Truthfully, A Bucket of Blood isn’t remotely scary. It’s also not laugh-out-loud funny, but the whole thing does work pretty well.

Like a lot of Corman movies, especially those with a running time of 66 minutes, A Bucket of Blood is incredibly simple. Walter Paisley (Dick Miller) is a goofy, socially stunted busboy at a beatnik coffee house. He wants nothing more than to be an artist of some sort and finds his thinking (such as it is) heavily influenced by two things. The first is the beat poetry of the local poet laureate Maxwell Brock (Julian Burton). The second is his desire to be liked even a little bit by Carla (Barboura Morris), who hands out at the coffee house with Walter’s boss, Leonard (Antony Carbone).

One night while trying to make a bust of Carla out of clay, Walter hears his landlady’s cat, which has somehow gotten trapped behind the wall in his room. Walter tries to free the cat, but since he’s pretty dumb, he starts stabbing through the wall with a knife to locate it. Naturally, rather than freeing the cat, he skewers it. Instead of confessing to his landlady, he covers the cat in clay and presents it as a sculpture. Carla loves it, and soon it’s on display in the coffee house. Just as critically to Walter, Maxwell lauds him with attention and praise. One of the coffee house patrons slips Walter a small packet of heroin as a form of admiration, which gets Walter tailed by an undercover cop (Burt Convy). Not wanting to go to jail, Walter brains the cop with a frying pan, killing him. And, buoyed by his success with the cat “sculpture,” suddenly Walter has a second statue to show everyone.

And that’s how it goes. Walter goes to greater and greater lengths to find “subjects” for his artwork while a minor murder spree takes place near the coffee house. Eventually, Leonard figures out exactly what is going on, but since Walter is experiencing not just fame but acclaim and acceptance, he is willing to go to extreme lengths to find new subjects for his “art.”

One of the things I genuinely like about Roger Corman in many cases is that while he doesn’t take himself that seriously, he does want to try to inject a lot of his films with something like a message. In the case of A Bucket of Blood, he’s taking the piss out of the beatnik counter culture, a culture that in many respects Corman and many of his stable of actors and crew were a part of. There’s something beautiful about watching a guy kick his own peer group in the balls, especially when he’s doing it just for the hell of it or for his own pleasure. Corman doesn’t really have a grand message here, like saying that the beatnik culture is terrible or subversive. He’s just tweaking it and thumbing his nose at it because it’s funny.

Surprisingly, for a film made for about $50,000, A Bucket of Blood works pretty well. Walter Paisley is perhaps too stupid to be a real functioning person in the real world, but that’s all a part of what the film is doing. Dick Miller is having a lot of fun in the role and makes it work as well as he can. The other roles, at least for the most part, work pretty well as extreme but still believable characters, even if they stretch the point to the level of caricature. I’ve known more than a couple of poets in my life (English major in college, after all), and while Maxwell Brock is an extreme version of them, I’ve known my share of people who seem to have that same philosophy.

Is this a good movie? It kind of is. It’s not really supposed to be a good movie or be something that creates conversation once its miniscule running time comes to an end. What it is is a fun movie. It’s a touch disturbing, but not really, and not in a way that will bother anyone. It’s a goof, and a pretty good one at that. Say what you will about Roger Corman and his merry band of cheap actors, they certainly had their moments.

Why to watch A Bucket of Blood: It’s actually pretty funny.
Why not to watch: At 66 minutes, it’s far too short.