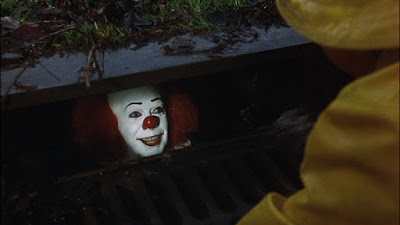 There was a time in my life when I read a lot of Stephen King. There were plenty of his books that I didn’t read, but I read probably 80% of his books at one point. There are still some of his books that I think are good, a few that are genuinely great. It (sometimes called Stephen King’s It) is one of his best stories. It’s not a terrible shock that within a few years of its publication that it was optioned for a movie. However, since the book is something like 1200 pages long, “movie” doesn’t quite cut it. Instead, it was created as a television mini-series. That’s good because it means that the huge story is given a little more space. It’s bad, because that means that at best it will be rated PG-13 (1990 television, after all), and a lot of the really nasty stuff from the book will be left out.

Actually, that’s exactly the case here. It keeps the basic story of the book and keeps the really important parts of it, but loses a large amount of the detail that makes the book so good. Fortunately, the story is strong enough that a lot of what needs to be kept here is still here. Some of the more interesting episodes of the book have been left out, but mainly what we lose is a great deal of the detail in the various characters. There are a few changes as well—surface changes that aren’t really that upsetting.

Anyway, It takes place in two different times—one time set in 1960 and one in the film’s current time of 1990. The miniseries was done in two parts, the first focusing on establishing the characters and spending a great deal of time in 1960. The second part has a few flashbacks to 1960, but spends most of its time with the modern versions of the characters.

Essentially, as kids, their town was plagued by a series of child murders, including the death of Bill’s younger brother Georgie. Each of the kids is visited by the culprit, a supernatural and eternal entity (the “It” of the title) that masquerades as what the kids fear most. It’s most common disguise is as Pennywise the Clown (Tim Curry). The kids fight off the local thugs, led by the school bully, Henry (Jarred Blancard/Michael Cole) and confront the child-killing demon. Essentially, the first half of the miniseries is introducing us to the adults and seeing the kids fight off the creature in 1960. The main story, though, is that Pennywise has returned in 1990, just as it has every 30 years throughout the town’s history.

The truth is that It starts out really well. It establishes the characters nicely, reordering quite a bit of the book to make something coherent and easy to follow for anyone who hadn’t read the book. The first half of the miniseries is really well done, giving us a good sense of the main characters as kids and giving us a glimpse of them as adults as well. It also establishes Pennywise as truly menacing. In fact, it’s surprising just how little Pennywise is actually in the whole thing, since he casts a huge shadow over the entire proceedings. Part of that is simply the character, but a great deal of it is the gleefully menacing performance of Tim Curry.

In fact, Curry’s performance is so good that it’s easy to forget just how lackluster the final half hour or so of It really is. I remembered liking this a lot more than I liked it on this watch, and almost all of my disappointment comes in the final half hour. That, and I’d forgotten just how much had been left out from the book. I didn’t expect that the “interludes” in the book—some of the better sections—would be kept, but a lot of the character-building sections got left out, as well as a lot of the past history that tied everything together. Additionally, while the changes to the characters aren’t significant, some of them don’t seem necessary. In the book, Richie is a shock-jock. Why make him a stand-up comic? Why get rid of Eddie’s marriage from the book?

It isn’t bad, but it’s not the end-all, be-all. It’s a little disappointing. The truth is that It really needs more space than three hours. Make this a week-long miniseries and give it 8-9 hours to really expand the story and I’d be completely on board for it.

Why to watch It: One of the better adaptations of Stephen King’s work.
Why not to watch: It leaves a lot out, and a lot of what it leaves out is great stuff, and the climax doesn’t live up to the rest of it.