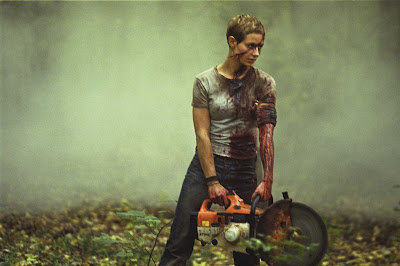 One of the classes I teach is English composition. I’ve found over the last dozen or so years that two of the places many students struggle is in writing good introductions and good conclusions, so I spend a great deal of time on them. What I tell them is that a great paper with a weak conclusion is remembered as a weak paper. The same is true with movies. A good, intelligent, and exciting movie that ends on a sour note is remembered more for the sour note than it is everything else. And thus we have High Tension (Haute Tension in the original French, and for some reason Switchblade Romance in the U.K.).

I’m not going to spoil the film by revealing the twist ending that creates plot holes that, as Roger Ebert said in his review, “[are] not only large enough to drive a truck through, but in fact [do] have a truck driven right through [them].” Chances are good that you’ve already seen High Tension and know what I’m talking about. If you haven’t seen High Tension, you’ve almost certainly heard other people complain about this very thing, and while you might not know the details of the ending that mar the film, you’re aware that they exist.

Marie (Cecile De France) and Alexia (Maiwenn) are students preparing for exams. To do so, they decide to spend the weekend with Alex’s family in the middle of nowhere. And since this is going to be exactly the sort of film you think it is, the doorbell rings in the middle of the night. Alex’s father (Andrei Finti) answers the door and encounters our killer (Philippe Nahon), of whom we got an earlier, disturbing glance. In short order, Alex’s father is horrifically decapitated, the dog is dead, and the killer is loose in the house. In short order, Alex’s mother (Oana Pellea) has had her throat slashed, her young brother lies dead in the cornfield, and Alex has been chained up. Marie, by hiding all evidence of her presence in the house, has managed to avoid being spotted.

What follows is Marie’s attempt to free her friend as the killer drags her away, puts her into his truck, and starts going across the country, leaving a trail of dead bodies and arterial spray everywhere he goes. High Tension does not shirk on the blood and gore. Weapons include an axe, a concrete saw, a barbed wire-wrapped club, a scalpel, and in a moment of pure creative magic, a bookcase. In fact, it’s the blood and gore that is the entire point of the film. No one watches High Tension for character development or cinematography.

What I have with High Tension is a puzzle for the way I typically write reviews. I cover plot and narrative more than anything, and this isn’t a film that is long on plot. I don’t like doing spoilers unless there is a way around them, and there’s not a real need to discuss the twist here that destroys the movie. So what is left to talk about?

I’m going to talk obliquely about that twist, which happens about 10 minutes before the credits start to roll. What it does is not merely create a situation that makes the previous events difficult to take, it makes a huge section of the film impossible to have happened. This isn’t merely a plot hole. It’s not like someone does something out of character. This twist literally makes a good portion of the end of the second act/start of the third act impossible to have happened. That’s a damn problem.

And it’s a terrible shame, because up to that point, High Tension is exactly what it claims to be and exactly what its title says it is. This is a tense and brutal movie that holds back nothing in terms of violence and horror. Anyone who is a fan of horror as a genre needs to be at least passingly familiar with the New French Extremity and with the works of directors like Alexandre Aja. High Tension is, in fact, one of the movies most commonly used as a touchstone of the subgenre. And the film is so fundamentally flawed that it seems to put the entire genre on its heels. That it even succumbs to a few horror movie clichés, like the car that won’t start, does it no favors, either.

So what can I say about High Tension that hasn’t already been said by critics more knowledgeable and more widely versed in film and genre film than I? Probably not much. It’s ultimately a disappointment. The first 75 minutes or so are exactly what you want in a horror film. It’s tense, upsetting, nerve-wracking, and bloody as hell. The final 10-15 minutes are such a disappointment because they force the viewer to spend that time no longer seeing what is happening on the screen but attempting to perform the impossible mental gymnastics needed to make the story work, and there’s simply no way to do that.

Why to watch High Tension: For most of its running time, it lives up to its name.
Why not to watch: The ending twist is aggressively stupid.