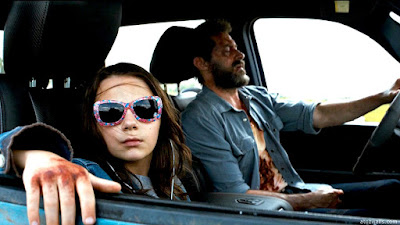 Let’s talk for a minute about what movies based on comics are and what they can be. What they are when they are at their best is fun action movies with great special effects and big action set pieces. We get villains who are purely evil set on world domination or world destruction and acts of great heroism. We get some thrills and some laughs and have something that serves as a vehicle for popcorn and Sour Patch Kids. What they can be is Logan.

Logan is set in the future of the X-Men universe, and it’s a future that hasn’t gone well for the mutants. It has been 25 years since a mutant has been born and in this world, most of the X-Men are dead. Logan (Hugh Jackman), known to the wider world as Wolverine, now lives in secret as a limo driver in El Paso. His former mentor Charles Xavier (Patrick Stewart) has lost control of his mental abilities and lives in an abandoned smelting plant just over the border in Mexico where Logan keeps him heavily medicated to prevent his mental attacks that inadvertently wiped out the X-Men the previous year. With them is Caliban (Stephen Merchant), an albino mutant with the ability to track down other mutants. Logan’s mutant powers are starting to slow down. While he still heals injuries, he doesn’t always heal as quickly or completely, and he now has scars covering his body from previous battles. He’s in constant pain, which he medicates with pain killers and alcohol.

One day, Logan is contacted by two different people. The first is Gabriela (Elizabeth Rodriguez), who offers him $50,000 to take her and a young girl named Laura (Dafne Keen) to North Dakota. The second is a man named Pierce (Boyd Holbrook), who is looking for the girl. Charles tells Logan that he knows about the girl, who he claims is a mutant. When Logan is finally convinced to help the girl, he finds Gabriela dead. He returns to the smelting plant, not knowing Laura has stowed away inside his trunk, and not aware that Pierce and his team are following them.

What follows is a journey north through the U.S., with Logan dealing both with the apparently feral Laura and the diminished Charles showing Alzheimer-like symptoms while being pursued by enemies who have captured Caliban and are using him to track them. It’s also soon evident that Laura has some genetic similarity to Logan himself, since she has his identical mutant abilities and appears to be similarly enhanced with claws and unbreakable bones.

I don’t tend to do movies until they show up on one of the lists I’m pursuing, but I think there’s a significant chance for Logan to be there. Oscar often has a short memory when it comes to the films released in a given year, especially with studios tending to backload their best films for the end of the year to attract Oscar nominations and voters. That said, there are Oscars for which Logan should be in the running. Probably the best chance it has is a nomination for Best Picture simply because there are more open slots for that category. Jackman, who has played this character in nearly a dozen films finally got the chance to play Logan as the man he had to become. I like Jackman, and I think this is his best work. Similarly, Patrick Stewart, who has gone his entire career without a nomination, offers his best and most tragic version of a beloved character and deserves consideration as a supporting actor. Newcomer Dafne Keen plays most of her role mute, communicating entirely nonverbally and providing a class for young actors in truly adopting a role.

The truth is that Logan works on just about every level. The story is one that makes sense with the X-Men universe that has come before it. While the ultimate villain of Dr. Rice (Richard E. Grant) lacks to bombast of a typical comic book villain, he’s no less villainous and no less threatening.

Why Logan works, though, is its focus. While there are character-driven movies based on comics, Logan is probably the first truly character-driven story I’ve seen about anything that might be called a superhero. Rather than being about the battle between the good guys and the bad guys, it’s about the characters themselves. There are still clear right/wrong distinctions here, but all of this is much more muted, since the film is much more concerned with how the characters deal with events and process them than it about the events themselves.

Logan doesn’t hold back on the violence, either. While there are many moments where the film is much slower, when violence erupts, it is full-on and brutal. These aren’t little bloodless fights or punch-ups where someone gets a bloody nose. Limbs get removed. People die and die horribly and in rapid succession.

Where Logan truly succeeds for me, though is in where this film fits in terms of genre and how it approaches the audience. It’s clearly a comic book movie in the sense that it almost certainly requires a particular amount of knowledge of the characters to fully understand. We’re not given a great deal of exposition here. It’s assumed that we know who Logan is and know who Charles Xavier is. When the bad guys show up as part of a corporation with the word “Alkali” in the name, we’re expected to connect that to Alkali Lake and the Wolverine’s origin story. It’s a film that doesn’t try to catch up the people who don’t already know the mythology. You need to know at least some of the previous X-Men franchise to fully follow the story.

For all that, Logan is a western more than it is anything else. There are frequent references to Shane throughout the movie, and that’s not an accident. Like the best of that genre, Logan discusses its characters with the story as a backdrop.

It’s a hell of a movie. I will not be surprised if it gets routinely ignored come award season, but I will be disappointed, because it does just about everything right.

Why to watch Logan: It’s what a movie based on comic book characters can be.
Why not to watch: It’s sad when things end.