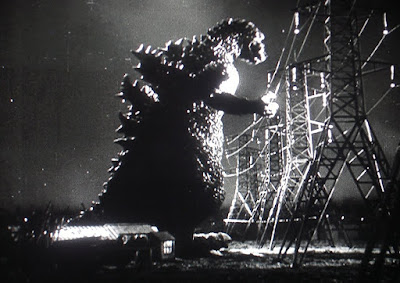 It’s easy to make fun of a film like Godzilla (or Gojira if you’re a purist), but that humor is frequently placed in the wrong direction. Godzilla movies did eventually get plenty silly, silly enough that some of them were eventually shown on Mystery Science Theater 3000. However, that’s something that could certainly be said of many horror franchises. Lots of them get silly. With Godzilla, it’s important to look at the first film. After, no horror fan would want to have A Nightmare on Elm Street judged by Freddy vs. Jason.

And, let’s be honest here, there’s plenty of things in Godzilla that are laughable. For starters, the science is ridiculous here. We’re told, for instance, that brontosaurus bones are about two million years old. Now, I’ll forgive the reference to brontosaurus, which was accepted in 1954 over the current designation of Apatosaurus, but two million years? And the trilobite fossils, which date in the multiple hundreds of millions of years old are also two million years old? A scientist creates a device that destroys oxygen? C’mon.

But hey, let’s forgive this stuff and talk about Godzilla as it’s presented. You almost certainly know the backstory here. Ships start disappearing and eventually these disappearances are linked to the arising of a giant lizard-y monster from the depths of the ocean. Godzilla is a radioactive something or other, sort of a T Rex with more functional arms and a few superpowers like radioactive breath. Eventually, Godzilla comes onto land and starts wrecking the place, downing power lines, stomping buildings, and making a general nuisance of himself. It’s important to note that in this original film, most of Godzilla’s destruction seems to come by accident. He’s not so much attacking cities as he his simply stumbling into them and crushing them accidentally, sort of like mistakenly stepping on an anthill.

The real thing here is that, like it or not, Godzilla essentially created the subgenre of giant monsters wreaking havoc on the general population. Okay, King Kong was around decades earlier and you could point to that, but Kong isn’t really the same thing as a kaiju. Okay, even there there’s probably debate on the subject. But the way Kong is presented is that he’s just a giant gorilla. He doesn’t have any sorts of super powers the way that Godzilla does. Additionally, Godzilla comes with a significant environmental message—he was essentially created by radiation. There’s a reason that this sort of film came from Japan, the only country to suffer being hit by atomic weaponry.

It would be easy to nitpick Godzilla into nothingness. In fact, it would be ridiculously easy to do this, starting with the really stupid science mentioned above. But why do that? When you think of kaiju movies, you almost certainly think of the myriad tropes that come from the genre. Pretty much all of those tropes literally started with this movie, which is why I consider it to be the real progenitor of the subgenre. Monsters with powers caused by environmental mishaps, liberal destruction of cities, even the fact that that destruction is really the point of the movie. When Kong goes berserk, it happens at the end of the film. Godzilla is sinking ships when this movie opens.

In fact, I think the biggest drawback to Godzilla is what happened to him in the decades following this movie. Even the pseudo-sequel that was basically this movie with Raymond Burr included to avoid a lot of subtitling or dubbing is worth watching for the same reasons this one is. Eventually, the series got really dumb with big, dumb monsters fighting Godzilla and Godzilla essentially developing new abilities as the monster of the day required him to get them to win the eventual fight.

Essentially, there’s a purity here that’s worth seeing and that’s a lot of fun. There’s something really special about a movie that starts a genre or subgenre, even with all of the problems that it certainly includes. Godzilla is certainly flawed, but it’s surprisingly ambitious and for that alone, it’s worth seeing.

Why to watch Godzilla: It invented a subgenre of film.
Why not to watch: Parts are plenty goofy.