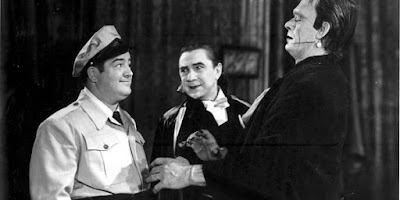 Bud and Lou, named Chick and Wilbur respectively, work as baggage handlers when they receive a call from Larry Talbot (Lon Chaney Jr.) not to deliver a pair of crates to the McDougal House of Horrors. However, just as Talbot is getting to the point, the full moon rises and Talbot changes into a werewolf, causing Wilbur to think that it’s a prank call. McDougal (Frank Ferguson) then shows up and takes charge of his crates, asking the pair to deliver them to his museum.

The conceit here is that the crates aren’t merely wax museum exhibits. One crate contains the coffin of Dracula (Bela Lugosi) complete with Dracula inside. The second contains the remains of Frankenstein’s monster (Glenn Strange), fully capable of being reanimated. Wilbur gets harassed by Dracula for a bit, but every time Chick comes to rescue him, there’s nothing to see. Eventually McDougal shows up and complains that the contents of his exhibits have been stolen and has Chick and Wilbur arrested.

Through all of this, Wilbur is consoled by Sandra Mornay (Lenore Aubert), his girlfriend. The sad fact is that Sandra is after Wilbur for a more sinister reason. She wants Wilbur’s soft, pliable brain to replace the one currently in the monster. At the same time, McDougal’s insurance company sends in Joan Raymond (Jane Randolph) to see what happened. Joan decides that her best bet to figure out what happened is to pretend to be smitten with Wilbur, giving him two girlfriends. Larry Talbot shows up with information that Dracula is trying to reanimate the monster. But, of course, since he turns into the Wolf Man with the coming of the full moon, he’s not always that useful.

Hilarity ensues. No, really. The joy of this film is that the comic timing of Abbott and Costello was, by 1948, tuned to absolute perfection. Abbott and Costello Meet Frankenstein is really a series of comic set pieces. It doesn’t really need to be anything more, because the entire point of the film isn’t so much to scare but to amuse. And it works.

It’s true that a lot of what happens is the sort of thing that you can see coming. When Wilbur is dealing with Dracula coming out of his coffin, we know just as soon as the scene starts that Wilbur is going to see Dracula and be terrorized by him and that Chick will never see anything. It’s a classic comic formula, so it’s not surprising when it plays out. The beauty of it is that despite the fact that we know what’s happening but still laugh at it. Abbott and Costello are really just that good.

You’re not going to find anything here that really scares anyone. Abbott and Costello Meet Frankenstein certainly has a few moments that are along the lines of the classic horror films, the sort of monster appearances that fall in line with the classic films. But that’s not the point. You could put this in front of younger kids and they wouldn’t be too terribly upset by it.

No, the reason to see this is to appreciate what Bud Abbott and Lou Costello were. They aren’t as well known today as they once were, and that’s a damn shame. They were treasures of American comedy, and this is them at their best. That and how much fun is it to see Lugosi, Chaney, and Strange (yes, it was his third movie in the flattop) reprise these roles?

Why to watch Abbott and Costello Meet Frankenstein: It’s impossible not to like.
Why not to watch: You are incapable of enjoying anything.