Ten Days of Terror!: Horror Hotel (The City of the Dead) 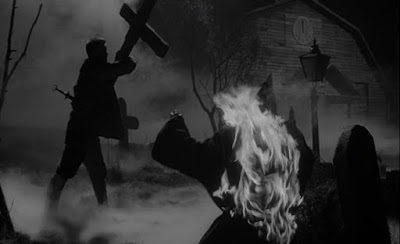 There are going to be some spoilers here, so you’re warned. Keep in mind that I’m spoiling movies that are well over half a century old, at least one of which has almost certainly been seen by everyone who reads this blog, and the other was spoiled in its intro from TCM, so I’m not terribly worried. Anyway, one of the most transgressive moments of Psycho is that the film’s main character gets killed off about half way through. We’re left with no one else to sympathize with but Norman Bates. It’s a great moment. The City of the Dead (known in the States as Horror Hotel) does a similar thing. It was accused of copying Hitchcock, although there are two significant points in its favor. First, it was released just four days after Psycho, which means at worst the filmmakers had the same idea at roughly the same time. Second, it actually went into production first.

The City of the Dead is much more clearly a traditional horror movie, though. We start off in the past with a witch trial, as a woman named Elizabeth Selwyn (Patricia Jessel) is dragged out an burned at the stake. This scene was actually cut from the original American release, because as the flames start to lick around her, Elizabeth hollers out a prayer to Lucifer, one that is echoed by her co-conspirator Jethrow Keane (Valentine Dyall). Evidently, a blatant prayer to Lucifer couldn’t make it past the censors. The prayer is to essentially survive the flames and give her eternal life to do the devil’s work.

Flash forward to the present (or at least the film’s present), and we find ourselves in a college classroom. Professor Alan Driscoll (Christopher Lee) is holding forth on the witch trials to his class. Student Nan Barlow (Venetia Stevenson) is particularly interested, even if her boyfriend Bill (Tom Naylor) finds the whole subject ridiculous. Nan talks to Professor Driscoll after class, saying that she’d like to do on-the-ground research on the witches over a short holiday. Nan’s science professor brother Richard (Dennis Lotis) doesn’t like this plan, but Nan goes off to the little-known town of Whitewood to look into witch burning, especially that of Elizabeth Selwyn.

Based on Driscoll’s recommendations, Nan finds herself at an inn run by Mrs. Newless (also played by Patricia Jessel). Things are immediately strange. An unknown man (known to us as Jethrow Keane) asks her for a ride, and then vanishes from her car. She borrows a book on witchcraft from Patricia Russell (Betta St. John), who has recently come to the town. Pat’s grandfather (Norman Macowan) is blind and is the town’s reverend, despite no one coming to the church.

It’s soon obvious to us what is happening. We learn that the witches centuries before liked to sacrifice a virgin on Candlemas Eve. The virgin was selected by having a precious personal item stolen and replaced with a dead bird. And hey, Nan’s locket is suddenly missing and she finds a dead bird in a drawer in her hotel room. It’s still a little big shocking when Nan is kidnapped by the coven and strapped to an altar. Since this was made in 1960, we cut away before the knife drops on poor Nan.

The upshot, is that our friend Professor Driscoll is a part of the witch cult, and the human sacrifices happen to keep the witches alive and young. Naturally, the disappearance of Nan is eventually figured out. Boyfriend Bill and brother Richard head to Whitewood to investigate, and we learn that Pat is likely going to be the next victim of the cult, and the second yearly sacrifice night is rapidly approaching.

There’s a lot to like with this movie. This is not a film that pulls its punches at all, putting it in that rare company of old horror movie that doesn’t attempt to play for that sort of Gothic romance and instead wants to kill off a good percentage of its cast. There are at least four non-witches who get bumped off at some point. The ending confrontation is also surprisingly epic and surprisingly tense. It all works really well.

I’d love to have this run another 10 minutes. It does manage to tell the whole story in its spare 76 minutes, but there’s enough here that I think it could handle a little more. The ending scene is so good, but then the film ends so abruptly that the closing title seems to come out of nowhere. Even a couple of minutes worth of coda to wrap up what happens with the surviving characters would be worthwhile; an explanation to the local police, perhaps.

I can forgive this, though, since everything else here works really well. It’s odd to hear Christopher Lee speaking in an American accent and it desperately needs a little more to close it out, but I love how much this film goes for genuine horror and scares and manages to get most of them to stick.

Why to watch The City of the Dead: A surprising body count and disturbing implications for 1960.
Why not to watch: Too short, and ends too quick.

Email ThisBlogThis!Share to TwitterShare to FacebookShare to Pinterest
Labels: horror, Horror Hotel, John Llewellyn Moxey, The City of the Dead