I'm Okay with My Decay 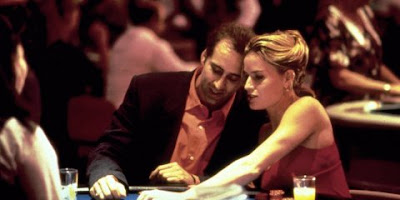 There was once a time when Nicolas Cage was not a parody of an actor. There were flashes of what he’d become during this period, but for years, Cage was a bankable actor in the sorts of movies that you didn’t watch just to see how insane his performance was. In the middle of that period was 1995 and Leaving Las Vegas, the film for which Cage won an Oscar.

Leaving Las Vegas is perhaps best described as a completely nihilistic romance. Ben Sanderson (Cage) is a screenwriter who has fallen on hard times. He’s not sure if his wife left him because of his alcoholism or if he became an alcoholic because his wife left him, but he’s gone far past the stage of being a functional drunk. Shortly after the movie starts, Ben loses his job, and with a sizable severance check, he decides to move to Las Vegas. He burns most of his belongings and leaves with the intent of drinking himself to death.

Once in Vegas, he meets Sera (Elisabeth Shue), a prostitute working for Yuri (Julian Sands). Ben offers her $500 to come back to his cheap motel room. Instead of sex, the two talk and Sera ends up spending most of the night with Ben. During the conversation, the two become close, starting something like a relationship that is somewhat sexually charged without any actual sex. Eventually, Sera invites Ben to move in with her. He agrees under the condition that she never ask him to quit drinking. He is fully aware that she is a prostitute and makes no judgments about what she does for a living.

There isn’t a great deal of plot here, honestly. Ben doesn’t slowly drink himself into a stupor; he does this as rapidly as possible, wanting nothing more than the oblivion of the grave. Despite this, something very much like a romance blooms between Sera and Ben. The two clearly have deep feelings for each other, much of this coming from the fact that they have decided to deal with each other with complete honesty and without any judgment on each other’s decisions. Of course they are eventually going to have a falling out over Ben bringing a different prostitute back to Sera’s house and Sera asking Ben to see a doctor as his health rapidly declines.

So, while there isn’t a great deal of plot here, there is a great deal happening. This is both a character study and an exploration of this strange relationship. It is very much a love story between Sera and Ben. Sera spends some of the movie discussing this relationship with a therapist (whom we never see), explaining exactly what it is that made her want to spend time with Ben. Both of them are terribly lonely, which forms a part of their bond. That loneliness perhaps fuels their willingness to accept each other as they are. For two characters who are so “degenerate” in the normal social sense, their love is remarkably pure.

Cage goes for it completely as Ben. He does nothing by halves and spends the entire film either drunk or having massive withdrawal symptoms that can only be cured by pouring more booze into himself as quickly as possible. Alcohol is the only thing he consumes throughout the film. In the two situations where he might actually eat something, he doesn’t. Ben is a character who has bottomed out and is fine with it. In fact, he’s hit bottom and started to take a jackhammer to the bedrock, desiring nothing but to die by his chosen method as quickly as possible. Not even a potential relationship with Sera will keep him from that self-appointed task.

Elisabeth Shue is equally compelling, and uses Ben’s downward spiral to follow a similar trajectory, at least for part of the film. Shue is, perhaps, a little too beautiful to be a believable prostitute, but within the context of the film, that doesn’t matter. In a sense, it feels like we are seeing her through the eyes of Ben, to whom she is perfect. She is perhaps playing a bit of a “hooker with a heart of gold” stereotype, except that this seems only to apply to Ben himself.

I have a single objection to the film, and that’s a rather brutal rape sequence near the end. I understand what it is in the context of the film (it’s more or less Sera bottoming out right around the time that Ben is finally achieving his goal), but it also seems completely unnecessary. There were other ways for Sera to hit bottom, and a vicious and ugly rape feels gratuitous, almost as if in the screenwriters’ mind (or that of the original author), sexual abuse was the only way to truly degrade a woman whose work and life is already seen as being degrading.

And yet, Leaving Las Vegas is a masterpiece. It’s surprising how, despite the story that is unfolding, the film manages to avoid darkness for most of its running time. The soundtrack is upbeat, and Ben’s descent into alcohol poisoning is done with eyes open and a smile on his face. It’s a hard film to react to because of this—the tone is so different from what I expected, and ye the tone works completely for the film, save that sequence mentioned above, which feels so out of place.

So what the hell happened to Nic Cage? Why can’t he do things like this again?

Why to watch Leaving Las Vegas: Before he became parody, Nicolas Cage was good.
Why not to watch: Cage went from this and Adaptaion to The Wicker Man and Left Behind.