Ten Days of Terror!: The Stand

Film: The Stand
Format: Internet video on The Nook. 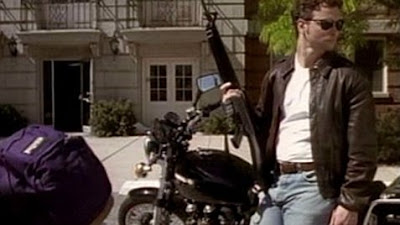 I remember when The Stand showed up on television. I remember it well enough, in fact, that I could recall specific scenes from it despite not having seen it for a couple of decades. What I remembered was that it started strong and stayed mainly true to the book. There were a few shortcuts taken here and there, but that’s by necessity. Even a six-hour miniseries can’t include every single thing, but since this was turned into a screenplay by author Stephen King himself, at least it would stay true to the story. I also remember that I was disappointed in the conclusion of the book and was doubly disappointed that the ending here was everything I hated about the book’s conclusion made literal.

That’s really the tale of The Stand. It starts strong—in fact the first two parts of the four-part miniseries are tremendously good. Things start to go a little south in the third episode and it nosedives hard at the end. Ah well, you can’t win them all, right?

The start is exactly how you do a plague that sweeps across the country and (presumably) the world. There’s an accident in a government facility and a strain of superflu escapes. The gate guard at the facility grabs his wife and daughter and leaves just as the gate closes. He becomes the infection vector for the entire rest of the world. Soon people are sick all over, and while they think it’s just the flu, it turns out that this is a flu that kills off its victims. It has an amazingly high infection rate and is apparently 100% lethal.

But the plague is just the start of things here. The Stand is more or less a medical version of the end of the world. The survivors, at least the survivors in the United States, are merely pawns in a celestial game. Some of the survivors are drawn to Boulder, Colorado by their dreams of a kindly old woman who calls herself Mother Abigail (Ruby Dee). The others are drawn further west to Las Vegas and the dark, evidently satanic charms of Randall Flagg (Jamey Sheridan). We also see their different stories as the deal with the deadly effects of the terrible plague and the equally deadly effects of the other survivors.

After the first couple of solid episodes the battle lines begin to be drawn. The people we’re meant to like (and who we generally do like) are those who gravitate to the old woman. The rest, some of whom we enjoy disliking, head out to Vegas. The supernatural/spiritual side of things builds slowly, through dreams and visions and the evident dark power possessed by Randall Flagg.

And, sadly, this is where The Stand starts to go off the rails. What has up to this point been a solid plague story with some supernatural overtones goes full Book of Revelation as the bad guys prepare to unleash nuclear hell on the good forces in Boulder. A sabotage kills off a chunk of people (including one major character) and a group of four are sent “into the wildeness” to confront the evil Flagg.

This is where I really got pissed off. The ending happens—the real ending of the main conflict in the story, anyway—because of the most literal and egregious deus ex machina that can be conceived. It is as if King wrote himself 800+ pages into a big ol’ corner and had nowhere else to go but to appeal to the divine. There’s a nice little coda at the end that eventually goes to the same damn place, which spoils the coda as well.

Ultimately, The Stand is well-made and well-acted (although Molly Ringwald gets a little whiny in places), even if it has to take a few shortcuts. The cast is excellent as well. But it’s also terribly unsatisfying because of the cheap resolution to the story. If the second half and especially the final episode had managed to live up to the promise of the plague section, it would be one of the truly great made-for-television movies since made-for-television became a thing. Instead, it’s just pretty good, if disappointing.

Why to watch The Stand: The first half is exceptional.
Why not to watch: It contains literally the stupidest deus ex machina in history.