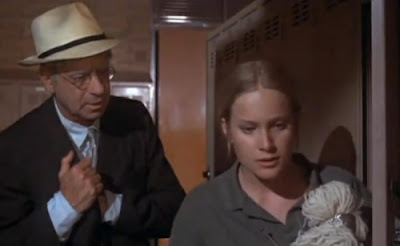 There are plenty of screen pairings that become legendary. Fred and Ginger, or Doris Day and Rock Hudson. One of the great screen pairings is Jack Lemmon and Walter Matthau, who made at least 10 movies together in one of the best comedy pairings in film history. It’s rather fitting, then, that when Jack Lemmon directed his first and only film, Kotch, that he got Walter Matthau to star in it. In that respect, Kotch is something of a collaboration between the two. It plays much like one of their comedies, with Lemmon’s typical role being taken by Deborah Winters.

Kotch is a clear example of a character study. There’s not a great deal of plot here, and there doesn’t have to be. Matthau carries the bulk of the film, and what he doesn’t carry, Winters handles surprisingly well. The entire point of the film is to get the audience to have warm, fuzzy feelings for our title character, get us to know and like him, and then get us through to an uplifting ending through joy and sadness. It’s a simple formula, and Kotch follows it carefully.

Because this is a character study, there’s not a great deal of actual plot here. Joseph Kotcher (Matthau) lives with his son Gerald (Charles Aldman), Gerald’s wife Wilma (Felicia Farr), and their infant son Duncan (played in the great Hollywood tradition by twins Donald and Dean Kowalski). Joe Kotch likes to talk and loves to tell a story. He’s got particular ideas about how things work and how they should work. When he assists a young girl in a small pool and is accused of being a child molester, Kotch explains what happened in a very roundabout, meandering way that quickly becomes something of a trademark.

For all his apparent charm, Joe Kotcher is a lonely man. His daughter-in-law Wilma doesn’t dislike him, but is also easily put off by his habits despite his availability and willingness to babysit young Duncan. One evening, Wilma and Gerald are headed out and hire Erica Herzensteil (Deborah Winters) as the babysitter. They assume that Joe will head to the movies as he planned. Instead he stays home, tends the baby, and catches Erica and her boyfriend having sex on the couch (they don’t know that he’s spotted them). Erica turns out to be pregnant, the boyfriend is a creep, and Kotch takes a little vacation. When he comes back, Wilma has taken over his room with her sewing.

By this time, Erica has left home and gone through at least one job. Joe decides to track her down and finally locates her. He buys a small bungalow in the area, invites her to come live with him, and eventually, she does. Through all of this, Joe Kotch has flashbacks to his younger days and his life with his wife Vera (Ellen Geer). But really, it’s about understanding who Joe Kotcher is and why we’re supposed to like him. Eventually, we get something like a resolution between Joe and his son and daughter-in-law.

There are a number of things that Kotch does very well. For starters, it puts Walter Matthau in the sort of role that he seems born to play. It’s worth noting that while Matthau did seem to be born to play this sort of old, crotchety know-it-all, he was all of 51 when he took on this role, or roughly the same age I am now. They had to age him up to get him well into his 70s, but Matthau had the persona down already. Her her part, Deborah Winters is very good. She didn’t have a long or distinguished career in movies but this demonstrates that with a few different breaks, she had some chops to be interesting on screen. As an added bonus, this is also the first big screen role for Larry Linville, who would go on to play Frank Burns on M*A*S*H.

It’s hard to go wrong with Walter Matthau in this sort of role. Joe Kotcher likes to talk and tends to ramble, and Matthau did that charmingly. Where the film works surprisingly well is in the realization that Erica likes to ramble and go on conversational tangents almost as much as Kotch does. It’s one of the reasons she makes a nice foil to him. It’s also appreciated that there’s not even the hint of a romance between the two. That would quickly destroy a great deal of the movie’s good will.

There’s no real pretense of plot here, but there doesn’t need to be. It’s perhaps a bit twee, but it means well. Sometimes, that’s enough.

Why to watch Kotch: It creates believable characters.
Why not to watch: Not a great deal of plot to speak of.