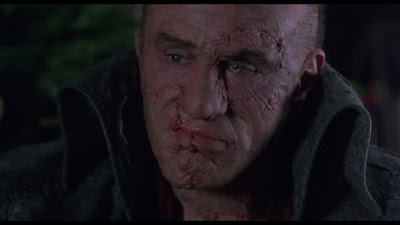 I remember when Kenneth Branagh’s version of Frankenstein, sometimes called Mary Shelley’s Frankenstein was released. I was interested in it because I like Branagh as a director and liked him in 1994 as a director. This was the guy who appeared on the directorial scene with Henry V, the most bad-ass version of Shakespeare’s most bad-ass history. I liked Dead Again probably more than it deserves. And here he was directing a classic horror tale with Robert De Niro as the monster. How could it be anything but awesome?

And then the reviews came in, and most of them were disappointing to say the least. So I never got around to it. I was married, had a wife who didn’t (and still doesn’t) care much for horror movies, and a job that took up a ton of time, so I essentially forgot about it. And then, boom, here it is, several decades later and Frankenstein falls into my lap. I remembered seeing the previews. I remembered the poor critical reception. But this blog is all about figuring these things out for myself at some point, so why not check it out?

Well, the critics were right. Frankenstein, for all of its promise and wonderful cast, is a bunch of noise and bombast. Sadly, it’s also pretty accurate to the original novel. This is one of the few cases where I’m familiar with the source material. I know that the novel is critically important and formative for both the horror and science fiction genres, but I’m not a fan of the book. It’s completely overwrought and emotional, consisting of page after page of various musings. No one in the novel is ever just sad—they are experiencing the greatest of all sorrows ever inflicted on one of God’s creatures. No one is ever just happy—they are imbued with paroxysms of joy the like of which are unknown to man and beast. The movie is much the same way—overwrought, bombastic, and frenetic.

You know (or should know) the basic story. This version of Frankenstein tries to stick much more closely to the novel, since the film that everyone thinks of with this story diverges from it in significant ways. That means that this is all told in flashback by a near-frozen Victor Frankenstein (Kenneth Branagh) to the captain of a voyage looking to chart a clear path to the North Pole at the tail end of the 18th century. The ship’s crew rescues Frankenstein, and he tells his tale to the fascinated captain (Aidan Quinn). The entire movie save for the first few and last few minutes are really just a massive flashback. It’s easy to forget that Aidan Quinn is there at all until you suddenly see him again a few minutes before the final credits.

Anyway, we’re introduced to Victor as a child and also introduced to his adopted sister Elizabeth (eventually played by circa Merchant/Ivory days Helena Bonham Carter). Eventually, Victor’s mother (Cherie Lunghi) dies in childbirth, crushing his father (Ian Holm) and convincing Victor that he should become a doctor and defeat death. Off he goes to school with the promise to return and eventually marry Elizabeth. It’s okay—they’re not blood related.

At school, Victor hangs out with Henry Clerval (Tom Hulce) and becomes close to rogue teacher Professor Waldman (John Cleese). Waldman once pried into mysteries of the creation of life, but stopped because what he created was in his words “an abomination.” When Waldman is killed while giving vaccinations to peasants to prevent smallpox, Victor takes up the cause and creates his creature (Robert De Niro) using the body of the murderer and the brain of his dead teacher. It does not go well. Eventually the monster escapes with Victor’s notebook. Victor assumes the monster is dead since all of this happens during a cholera outbreak. Instead, the monster goes and lives in the pigsty of a farm family until they get scared of him and he runs away. During that time, the monster learns to speak and read and discovers the secret of his creation. He vows revenge on the man who created him, which sets up the rest of the film.

The thing that I was the most excited about here was the casting of De Niro as the monster. It’s really interesting and inventive casting, and I loved the thought of it. This is back when De Niro was still taking a lot of serious roles rather than looking for spots in comedies. I like him here, and he’s the best part of the film, even if he suffers from the same problem as everything else in the film—bombastic, overly dramatic, and frenetic. Oddly, his is the most controlled performance on offer.

The rest is exactly what I’ve said it is. Set to swelling strings played too loudly, Frankenstein is hyper-emotional, a nearly pure distillation of the roots of the Romantic Movement. It’s almost oppressive. That which doesn’t fall into this problem is sadly a victim of Kenneth Branagh’s young ego. Evidently, Branagh hit the weight room before Frankenstein so there are plenty of scenes where he is shirtless for no reason other than to show off his abs.

Frankenstein in places would have been better staged as a farce. For instance, when he first creates the monster, the shirtless Victor is disappointed by what seems like a failure until the creature pounds on the side of the bathysphere-like vessel it was created in. Victor turns slowly, then rushes back, dumping the contents. He then spends what feels like three minutes in a Benny Hill routine trying to get the monster to stand, slipping and falling, helping him up again, slipping and falling, until the creature is finally caught up in a bunch of chains and hauled to the ceiling. It’s all a bit much.

It’s beautifully staged, and De Niro looks great as the monster. This is a really bad version of the story, though, accurate to the book or not. Rather than feeling sympathy for anyone involved, I’m just drained by it.

Why to watch Frankenstein (1994): De Niro as the monster? Yes!
Why not to watch: It’s bombastic, overwrought, and ridiculous.