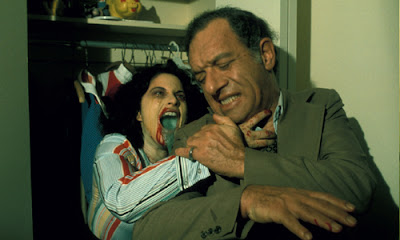 David Cronenberg is best known for body horror films. Even much of the last decade’s examples of his filmography that haven’t been overtly horror--Eastern Promises, A History of Violence--have had elements of body horror in them. Cronenberg’s classic period of films contain some truly disturbing imagery and horrific sights. Rabid is an early film in his career, and while it has all of the hallmarks of a new filmmaker working without much of a budget, it’s also one that is indicative of the style that would make him a favorite of horror movie fans.

Rabid starts with Rose (Marilyn Chambers) and her boyfriend Hart (Frank Moore) go off for a motorcycle ride. Thanks to a van that has decided to attempt to turn around on a narrow road, Rose and Hart wipe out and Rose is pinned under the bike as it catches fire. With no hospital nearby, they are taken instead to a nearby plastic surgery clinic where Rose’s injuries are treated by Dr. Keloid (Howard Ryshpan). To assist in her healing, Keloid uses an experimental technique in skin grafting that will hopefully allow the grafts to adapt to their new location on her chest and abdomen.

But, since this is a horror movie and a David Cronenberg horror movie, we can rest assured that that’s not going to happen. Rose stays in a coma for some time until she suddenly wakes up screaming. When another patient at the clinic comes to investigate, Rose attacks him with something that has evidently grown from her new skin. She now has very Cronenberg-looking orifice under her left arm that houses a stinger. It stabs its victim and draws blood, which is now the only way that Rose can gain sustenance, making her something like a vampire. Worse, when she feeds off someone, that person develops a condition similar in many ways to rabies, causing blood-seeking attacks, and in turn infecting that person.

Soon enough, there’s an epidemic in Montreal with more and more “rabid” people attacking others. The city falls under martial law with shoot-to-kill orders to attempt to quell the disease. And through all of this, Rose continues to seek out victims and feed on them, renewing the plague with each victim she finds.

It isn’t hard to see Cronenberg’s influences for Rabid in addition to his own penchant for body horror. There’s a great deal here that is similar to Night of the Living Dead with the outbreak of plague and the flesh/bloodlust of those who become infected by it. There is also, as seems to be a common theme with Cronenberg, a strong sexual element to the plague. Rose’s attacks are very similar in many ways to rape, and this is absolutely intentional on his part. The stinger that Rose has developed is absolutely phallic and the attacks are absolutely violating.

If you didn’t know this was a Cronenberg film, it would soon become apparent if you are at all familiar with his work. The visuals are purely his, particularly anything dealing with Rose’s phallic stinger and the sphincter-like orifice from which it emerges. This is a look that Cronenberg went back to time and time again in films like Videodrome and Naked Lunch. In that respect, this is an early exemplar of what would be come some of his signature visuals.

Rabid’s biggest issue is its budget, which was clearly minimal. Most of what there was went to the special effects. It clearly didn’t go to the actors. Of the entire cast, only Joe Silver, who plays Dr. Keloid’s business partner and Susan Roman, who plays Rose’s friend Mindy are even remotely convincing. Say what you will about Marilyn Chambers and her most famous roles in pornography, the woman couldn’t really act. It’s interesting that evidently Cronenberg originally wanted Sissy Spacek for the role, but was convinced to use Chambers for more sex appeal. Honestly, that’s really all she had in front of the camera, because when she is not being overtly sexual (tying in with the sexual nature of the infection), she’s pretty wooden.

Rabid is the kind of film that feels grimy. It’s disturbing and awful the way Cronenberg’s best work tends to be, but it’s also so creepy and weird that it’s a difficult film to enjoy. And yet, the cheapness of it, the grittiness and awfulness of it is a big part of the attraction and reason to see it. The entire point of the film is to make the viewer uncomfortable with what is happening, and in that respect, it succeeds admirably.

I like David Cronenberg’s work in general. Even when he fails with something like Naked Lunch, he makes really interesting failures. Rabid isn’t a failure, even if it’s not a complete success. As a view for what the man would become as a director, I think it’s pretty close to essential viewing.

Why to watch Rabid: Cronenberg body horror at early intensity.
Why not to watch: Most of the cast can’t really act.