Films: The Cat and the Canary (1939)
Format: Turner Classic Movies on rockin’ flatscreen. 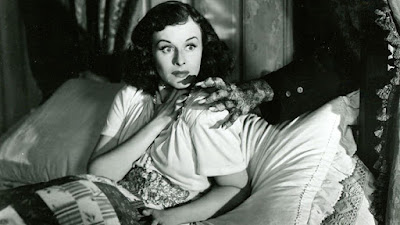 Like any genre of film, horror has a number of subgenres. Many films hit on one of these while others, like The Cat and the Canary attempt to blend multiple subgenres. This is a film that is one part standard horror movie, one part comedy, and two parts creepy old house mystery. There’s a great deal of films like The Old Dark House or The Black Cat here, where the location is a large part of what happens and the creation of the scares. And, like many a haunted house mystery for a modern audience, The Cat and the Canary plays like a long episode of Scooby-Doo.

As the film opens, it’s ten years to the day after the passing of Cyrus Norman. Cyrus was an eccentric millionaire who lived in a giant corroding house in the Louisiana bayou. Now that he’s been dead for ten years, it’s time to read his will in the library of his old house. The lawyer Crosby (George Zucco) has arrived and met the caretaker, Miss Lu (Gale Sondergaard), who has been the sole occupant of the house for the past ten years. Over the next few minutes, our other guests arrive. These are Cyrus Norman’s surviving relatives. They are Fred (John Beal), Charles (Douglass Montgomery), Aunt Susan (Elizabeth Patterson), and Cicily (Nydia Westman). The final two, and the two for whom we’re going to be mainly concerned, are Joyce Norman (Paulette Goddard), the only person to still carry the family name and Wally Campbell (Bob Hope), a radio actor who is distantly related and knew Joyce in high school.

So how this goes isn’t going to be too surprising. The will is read at midnight and names Joyce as the sole heir of the estate. However, since there is a strain of insanity running through the family, there is a 30-day waiting period for the inheritance. If Joyce goes bibbledy or dies in the next 30 days, a second will is read, leaving the inheritance to a different person. As is immediately recognized by everyone there (especially Wally), this means open season on poor Joyce, either in terms of driving her screwy or bumping her off.

Just to make things fun, there are a couple of additional monkeys in this wrench. The first is a missing necklace that should be a part of the inheritance and that is worth a great deal of money. The second is the sudden arrival of Hendricks (John Wray), a guard from a nearby asylum. He tells the collected group that a dangerous murderer known as “the Cat” has escaped and may be lurking about the premises looking for victims. Because hey, what’s a haunted house mystery without the additional threat of a strangler?

Now that we have the set-up, The Cat and the Canary goes about its twin purposes with a will. The bulk of the movie is actually a horror movie that seems pretty genuine for this vintage. We’ve got all the haunted house/murder mystery tropes here including secret panels, people being mysteriously dragged away by hands coming from around corners, and just about everything else you can think of. For 1939, this is standard stuff, and there are actually a couple of scares that work pretty well. Essentially, everyone except Crosby, Joyce, and Wally are meant to be suspects here, with some special emphasis on Miss Lu. And, for the most part, that’s what we get.

The rest of the film is more or less Bob Hope dropping one-liners at every opportunity. That sounds like it might be annoying, but it really isn’t. As a character, Wally is the sort who drops a joke to bolster his own courage and for the most part it works. In fact, the only way it doesn’t work is that it plays against the film persona that Hope eventually created. Hope is always funnier when he’s craven, not when he’s managing bravery as he is here. Still, this is pretty early in his film career, and that can be forgiven.

The Cat and the Canary is really kind of a trifle, but it’s a fun trifle. At 72 minutes, it’s also bite-sized and fun for a quick little excursion into what once might have passed as scary and today passes as a sort of pleasant nostalgia. It’s not going to be anyone’s favorite movie, but it’s very entertaining for what it is.

Why to watch The Cat and the Canary: Bob Hope and Paulette Goddard had nice comic timing and chemistry.
Why not to watch: It’s far too short.

Email ThisBlogThis!Share to TwitterShare to FacebookShare to Pinterest
Labels: comedy, Elliott Nugent, horror, The Cat and the Canary, thriller