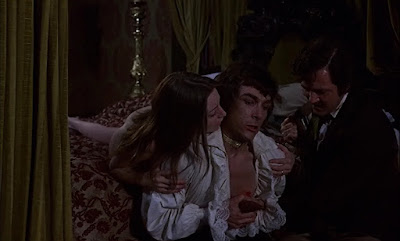 There was a time when Hammer made the best Gothic horror movies. Actually, when they were making this style of film, they were probably always the best because they were the only ones doing it. By 1972 and the release of Vampire Circus, their star had definitely faded, though. Seemingly unable to attract people with classic tales, they resorted to a lot more gore and nudity to bring in the audiences. Vampire Circus is that breed of film, unfortunately. As much as it’s a little painful to say this, the best part of this movie is the title.

Think of all of the possibilities with a title like Vampire Circus! So many great options, and Hammer went with the lamest one. Rather than modernizing the concept of the vampire and bringing it into the current century, they stayed with a film taking place in the 18th or early 19th century with all of the frilly costumes that implies. The circus is little more than a few animals, an evil clown, and a few acrobats. What a waste of a great name.

Anyway, once upon a time in a small Serbian village, Count Mitterhaus (Robert Tayman) has been killing off the villagers’ children and has also stolen the wife of the local schoolmaster. When another child is lured into the castle to be killed (rather daring for the time, really), the villagers revolt and storm the place. The count is killed off, but Anna (Domini Blythe) escapes. Flash forward 15 years. The village is dealing with a terrible plague. Many of the villagers believe this is the return of Count Mitterhaus’s dying curse. The local doctor is convinced that it’s an actual plague, though, and he braves the quarantine to head to a large city to acquire medicine.

Around the same time, a circus shows up. Lead by an unnamed gypsy (Adrienne Corri), the circus attempts to entertain the masses, but there’s definitely something off about them. What is it? Emil (Anthony Higgins), a member of the circus, is the cousin of Count Mitterhaus. He’s brought the circus here to exact his revenge on the townspeople by killing the children of the men who killed the count and, naturally, reviving his cousin. One of the star attractions of the circus is a black panther, which we eventually learn is Emil himself.

And that’s part of the problem here. Vampire Circus plays with a lot of the vampire canon, and doesn’t do it in a way that does it any favors. Emil can shapeshift into a panther, not a bat or a wolf, and that seems odd. The vampires seem to be able to come and go as they please into people’s houses without being invited in. Why? Because the plot demands it. That’s lazy writing. There are plenty of ways to get the vampires into a house without resorting to completely rearranging centuries of vampire lore.

Much of the film revolves around the romance between Dora (Lynne Frederick), the daughter of the school master and Anton Kersh (John Moulder-Brown), the son of the doctor. Since Dora is the daughter of one of Count Mitterhaus’s killers, she is clearly on the hit list. Since Anton is the son of the skeptical doctor, he’s a hard sell in terms of there being vampires in the area. And round and round we go.

That’s my complaint here. There’s a lot of possibility, even in a genre as played out as the vampire film in 1972. There were a lot of places that this could be taken instead of trying to just sexy and gore up a genre that had ceased being interesting. The gore moments are mostly ineffective. A few townspeople get torn up by the panther at one point, and it’s cheap looking and not very effective. The aftermath is clearly bad stage props that wouldn’t shock a 10-year-old.

I don’t say things like this often, but it’s warranted in the case of Vampire Circus. Someone needs to remake this. What I mean by that is that someone needs to take the awesome name of this movie and make a real film out of it. Bring it into modern times. Ramp up the weird sexuality. Add some real scares. Honestly, the name is pretty much all that is worth salvaging. If this had been a psychedelic vampire film, it could have been fantastic. Instead, it’s just sort of dull.

Why to watch Vampire Circus: It’s a clear attempt to maintain Hammer’s Gothic past.
Why not to watch: So much wasted potential.